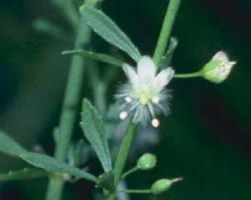 Vassourinha is an erect annual herb in the foxglove family that grows up to 1/2 m high. It produces serrated leaves and many small, white flowers. It is widely distributed in many tropical countries in the world and is found in abundance in South America and the Amazon rainforest. It can be found as far north as the Southern United States, including Texas, Florida and Louisiana. The plant is called escobilla in Peru, vassourinha in Brazil and in here in the U.S. the plant is known as sweet broomweed or licorice weed. In many areas, the plant is considered an invasive weed.

Vassourinha has long held a place in herbal medicine in every tropical country where it grows, and its use by indigenous peoples is well documented. Indigenous tribes in Ecuador brew a tea of the entire plant to reduce swellings, aches, and pains. The Tikuna Indians make a decoction for washing wounds, and women drink the same decoction for three days each month during menstruation as a contraceptive and/or to induce abortions. In the rainforests of Guyana, indigenous tribes use a leaf decoction as an antiseptic wash for wounds, as an anti-nausea aid for infants, as a soothing bath to treat fever, and in poultices for migraine headaches. Indigenous peoples in Brazil use the leaf juice to wash infected wounds, and place it in the eyes for eye problems; they make an infusion of the entire plant to use as an expectorant and to soothe and soften the skin. Indigenous tribes in Nicaragua use a hot water infusion and/or decoction of vassourinha leaves (or the whole plant) for stomach pain, for menstrual disorders, as an aid in childbirth, as a blood purifier, for insect bites, fevers, heart problems, liver and stomach disorders, malaria, venereal disease, and as a general tonic.

Vassourinha is still employed in herbal medicine throughout the tropics. In Peru a decoction of the entire plant is recommended for upper respiratory problems, biliary colic or congestion, menstrual disorders, and fever; the leaf juice is still employed externally for wounds and hemorrhoids. In Brazilian herbal medicine the plant is used to reduce fever, lower blood sugar and blood pressure, and as an expectorant for coughs and lung congestion. A tea is prepared from the leaves or aerial parts of the plant for fevers and urinary tract diseases, upper respiratory disorders, bronchitis, coughs, menstrual disorders, and hypertension. The leaf juice or a decoction of the leaves is also employed topically for skin ulcers and erysipelas. In Ayurvedic herbal medicine systems in India a leaf tea is widely used for diabetes.

Chemical screening of vassourinha has shown that it is a source of novel phytochemicals in the flavone and terpene classification, some of which have not been seen in science before. Many of vassourinha’s active biological properties, including its anticancerous properties, are attributed to these phytochemicals. The main chemicals being studied are scopadulcic acids A and B, scopadiol, scopadulciol, scopadulin, scoparic acids A, B, and C, and betulinic acid.

The antitumorous activity of scopadulcic acid B was demonstrated in a 1993 study, and antitumor activity against various human cancer cell lines was reported again in 2001. This chemical and another compound named scopadulin demonstrated antiviral properties in several studies, including against Herpes simplex I in hamsters. Betulinic acid is another phytochemical that has been the subject of much independent cancer research (beginning in the late 1990s). Many studies report that this phytochemical has powerful anticancerous, antitumorous, antileukemic, and antiviral (including HIV) properties. This potent phytochemical has displayed selective cytotoxic activity against malignant brain tumors, bone cancer, and melanomas (without harming healthy cells).

In addition to its tested anticancerous chemicals, a methanol extract of vassourinha leaves also showed toxic actions against cancer cells (with a 66% inhibition rate) by Japanese researchers. These findings fueled more research on the chemicals in this plant and their activities that is still ongoing today.

Some of vassourinha’s other uses in herbal medicine have also been validated by western research. In early research, vassourinha demonstrated a cardiotonic effect in animals. More than 40 years later, researchers reconfirmed its blood pressure lowering properties in rats and dogs (while increasing the strength of the heartbeat). It also demonstrated anti-inflammatory, antispasmodic, and pain relieving activity in animal studies with rats, mice, and guinea pigs. A single chemical called scoparinol was identified by scientists as being responsible for the pain relieving effects. Another researcher, in a 2001 study, again documented significant pain relieving and anti-inflammatory effects in laboratory animals – and also indicated scoparinol demonstrated diuretic and barbiturate potentiation activity. These documented actions could certainly explain its traditional use as a natural remedy for pain of all types (including menstrual pain and cramps as well as during childbirth). In 2002, researchers in India verified vassourinha’s antidiabetic and blood sugar-lowering effects in rats. In other in vitro laboratory tests, vassourinha demonstrated antioxidant actions, as well as, active properties against bacteria and fungi (which could explain its sustained use for respiratory and urinary tract infections).

Scientists have been trying since the mid-1990s to synthesize several plant chemicals found in vassourinha, including scopadulcic acid B and betulinic acid, for their use in the pharmaceutical industry. Herbalists and natural health practitioners have used and will continue to use the plant as an effective natural remedy for upper respiratory problems and viruses, for menstrual problems, and as a natural pain reliever and antispasmodic remedy when needed. Water and ethanol extracts given to mice at up to 2 grams per kilogram of body weight showed no toxicity.

Cautions: Use with caution in combination with barbiturates and antidepressants. It has hypoglycemic effects.

The traditional use as an abortive and/or childbirth aid warrants that vassourinha should not be taken during pregnancy.

Avoid combining with antidepressants or barbiturates unless under the supervision of a qualified health care practitioner (see drug interactions below).

A vassourinha extract recently demonstrated hypoglycemic activity, significantly lowering blood sugar levels in rats. This plant is probably contraindicated in people with hypoglycemia. Diabetics monitor their blood glucose levels closely if they use vassourinha to monitor these possible effects.

Drug Interactions: One human study documented that an ethanol extract of vassourinha inhibited radioligand binding to dopamine and seratonin. Another study reported that a water extract given intragastrically to rats potentiated the effects of barbiturates. As such, it is possible that vassourinha may enhance the effect of barbiturates and selective serotonin reuptake inhibitor antidepressants.

“Bati matsoti”, “Escobilla”, “Ñucñu-pichana”, “Piqui pichana”. Leaf infusion used for bronchitis, cough, diarrhea, fevers, kidney diseases, and hemorrhoids (RVM, VDF). Leaf infusion antidiarrheic and emetic (CAA). Antiseptic leaf decoction used for wounds; and fever. “Créoles” use the leaf decoction mixed with maternal milk as an antiemetic for infants. Dried leaves used by as a marihuana substitute. “Palikur” use the leaf decoction in antipyretic baths and in poultices for migraine headaches (GMJ). Ecuadorians take the tea for pain and swelling (SAR). “Tikuna” drink the tea, with or without “paico”, three days during the menses as an abortifacient or contraceptive (SAR). Four to five plants tied together make the typical river-dweller’s broom (RVM). Brazilians add the root to the bath when “cleaning their blood” (BDS). They apply strained leaf juice for eye ailments; and to infected wounds (erysipelas) (BDS).”

Ingredients: 100% pure vassourinha (Scoparia dulcis) whole herb (root, leaf, stem, flowers). No binders, fillers or additives are used. It is a wild harvested product—grown naturally in the Brazilian Amazon without any pesticides or fertilizers.

Suggested Use: This plant is best prepared as an infusion (tea). Use one teaspoon of powder for each cup of water. Pour boiling water over herb in cup and allow to steep 10 minutes. Strain tea (or allow settled powder to remain in the bottom of cup) and drink warm. It is traditionally taken in 1 cup dosages, 1 or 2 times daily. For more complete instructions on preparing herbal infusions, see the Methods for Preparing Herbal Remedies Page.

The traditional use as an abortive and/or childbirth aid warrants that vassourinha should not be taken during pregnancy.

Avoid combining with antidepressants or barbiturates unless under the supervision of a qualified health care practitioner (see drug interactions below).

Drug Interactions: One human study documented that an ethanol extract of vassourinha inhibited radioligand binding to dopamine and seratonin. Another study reported that a water extract given intragastrically to rats potentiated the effects of barbiturates. As such, it is possible that vassourinha may enhance the effect of barbiturates and selective serotonin reuptake inhibitor antidepressants.

Share and Enjoy:
Tagged with: anti-nausea • make a decoction for washing wounds • Migraine / Headaches • natural antiseptic wash for wounds • soothing bath to treat fever • women drink the same decoction for three days each month during menstruation as a contraceptive and/or to induce abortions