Why? Because of the wonderful job it does filtering out the harmful and noxious gases.

Do you realise that these same broad leaf tree’s and plants, actually absorb the poisonous carbon dioxide gases from the atmosphere and release life giving oxygen.

They really are helping to slow down the green house effect. But as more and more of the mighty rainforest trees are cut down, or burned to the ground, so they will be able to help us less and less.

It has been estimated by scientists that this one rainforest alone is responsible for supplying about 35% of the worlds oxygen requirements. Yet companies still cut it or burn it down.

The Tropical rainforest’s of the world are a rich mixture of life. There are thought to be about 200 million indigenous tribal people living in the rainforests throughout the world. Though of course this figure cannot be substantiated due to the inaccessibility of many large regions of the forest. But although these people do not have the modern technology which we take for granted, they really do know and understand how to sustainably harvest the rainforests. They know which plants can be eaten and which plants can be used for medicines

FACT:- Every 20 minutes an area of rainforest the size of New York’s Central Park is destroyed.

FACT:- If deforestation carries on at its present rate, there will be no rainforest left on earth within a 100 years

Rainforest’s help a great deal in regulating the world’s climate and atmosphere. The broad leaf trees of the rainforests absorb carbon dioxide from the air and release oxygen. With fewer rainforests less carbon dioxide is being absorbed. More carbon dioxide means that more heat from the sun stays locked up in the atmosphere causing the devastating greenhouse effects.

FACT:- An amazing 2,500 acres of rainforest are being destroyed every single hour 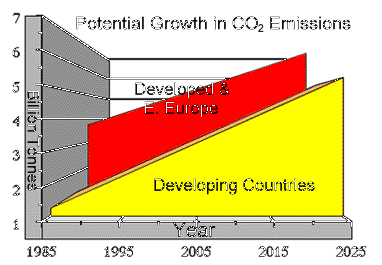 The Rainforests are scattered in a broad band along the earth’s equatorial belt. They range from the forests bordering the Great Barrier Reef in Australia to the forest of Central America. The largest of these by far is the Amazonia, which covers an area of over 5 million square miles. But it is being eaten away by logging, land clearance for ranching and farming, mining and damming and for new roads.

With so much to offer, it is an international disaster that the rainforest is being eaten up at such an alarming rate with some timber being used to produce paper for stationary and packaging.

FACT:- Already, well over half the worlds rainforests have been cut down., and the rate of destruction doesn’t seem to be slowing down much.

FACT:- The population of America spends at least $2 Billion on tropical wood products including furniture and matches.

Throughout the world rainforests are being destroyed to make way for civilised man, to grow crops, to provide timber and to develop the land.

FACT:- In the last ten years, just then amount of wood shipped from South America to other countries is equivalent to more than a 700,000 acre forest. This is just the wood taken, so how much was left to rot on the ground?

FACT:- When the illegal logger’s move into an area to bribe the locals with trinkets and effectively steal the huge Mahogany trees by the truck load, they have to fell approximately 30 other tree’s of all types just to get one Mahogany tree out. These felled tree’s are then just left to rot where they lay.

Although the problem surrounding deforestation of the rainforest is the most severe, the problem is also occurring elsewhere in the world with dramatic results. All over the world forests are being destroyed at an alarming rate.

As the world’s population grows more space is needed to provide land to build upon,

In some parts of the world forests are being cut down and the land cleared to make way for houses, offices and factories. This in itself is a profitable process because the wood that is cut down is sold to supply timber to paper manufacturers, building industries and the furniture trade.

In the very hot and dry regions of the world, the rapid rates at which the forests are disappearing are causing deserts to expand.

Under normal circumstances trees absorb the water flowing down the hillside. This water contains the vital nutrients, which they need to survive. In places where the trees have been cut down this water flows down hillsides gathering topsoil on its way. There is nothing to absorb the water and prevent it flowing straight into the sea’s rivers and lakes. The arrival of this ‘loaded’ water into the river and lakes upsets the natural balance of acidity. This disturbance is in many cases catastrophic, and causes many of the fish and other wildlife to die.

Data correct at the time it was compiled