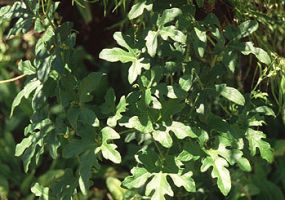 Tayuya is a woody vine found in the Amazon rainforest (predominantly in Brazil and Peru) as well as in Bolivia. This important Amazon plant belongs to the Cucurbitaceae (gourd) family, which comprises over 100 genera and over 700 species—most of which are characterized by their long, tuberous roots. It is this root that is employed medicinally. Harvesting of it can only be performed during rainy season, when the ground is soft and wet; during dry season, the ground is too hard to extricate the root (which can extend to three feet long) from the dry clay soils in the Amazon. About 50 species of Cayaponia occur in the warmer parts of the Americas, West Africa, Madagascar and Indonesia. In Brazil, Cayaponia tayuya is known as taiuiá; in Peru, it is called tayuya.

Tribal & Herbal Medicine UsesSouth American Indians have been using tayuya since prehistoric times, and the plant’s value is well known. It has been used as a tonic and blood cleanser traditionally (and, usually, with a bit of honey or stevia added to tone down the strong, bitter taste). In the Amazon rainforest, Indians have used the root of tayuya for snakebite and rheumatism for centuries. Indians in Colombia use the plant for sore eyes; indigenous tribes of Peru use it for skin problems.

Tayuya has a long history in Brazilian herbal medicine; it was first recorded in the Brazilian Pharmacopoeia as an official herbal drug in 1929. Brazilian botanist J. Monteiro da Silva reports tayuya is used for the treatment of all types of pain and, recommends it as an anti-syphilitic agent. Monteiro also believes that tayuya helps to regulate metabolism. In Brazil today, tayuya is used as an analgesic, diuretic, anti-inflammatory, tonic, blood purifier and detoxifier; to treat diarrhea, epilepsy, metabolism disorders, backache, sciatic pain, headaches, gout, neuralgia, constipation, anemia, cholera, dyspepsia, stomach problems, fatigue and debility, skin disorders, arthritis and rheumatism, syphilis, tumors (especially in the joints)—and as a general analgesic for many conditions.

Currently, tayuya is employed in North and South America for its pain-reducing properties and more. Natural health practitioners in the United States are using tayuya to treat irritable bowel syndrome (IBS), dyspepsia and sluggish digestion, neuralgia, sciatica, gout, headaches, rheumatism, and as a metabolic regulator. Because of its reported effectiveness as a blood purifier and detoxifier, it is also being used to treat water retention, wounds, splotchiness on the face, eczema, herpes, severe acne, and other skin problems. It is also being used in athletic training and recovery to help remove lactic acid accumulation, reduce swelling, and to relieve emotional fatigue and depression.

Plant ChemicalsTayuya is phytochemically rich in flavones, glucosides, and cucurbitacin triterpenes. Almost every species in the huge Cucurbitaceae family is documented to contain cucurbitacin compounds—many of which evidence biological activity (and, oftentimes, the plant’s medicinal activity is ascribed to these chemicals). Novel cucurbitacins have been discovered in tayuya and named cayaponosides (24 distinct cayaponosides have been discovered thus far). These phytochemicals have been documented to have antioxidant, anti-inflammatory and analgesic properties and, more recently, to have anticancerous potential.

The National Cancer Center Research Institute in Tokyo, Japan reported (in 1995) that five cayaponosides in tayuya “. . . exhibited significant anti-tumor-promoter activity in screening tests using an Epstein-Barr virus activating system.” and that two other cayaponosides “. . . also suppressed mouse skin tumor promotion in a two-stage carcinogenesis experiment . . .” Another cucurbitacin found in tayuya, cucurbitacin R, has been studied extensively in Russia. There it is cited as a powerful adaptogen, preventing stress-induced alterations in the body. Other flavone phytochemicals in tayuya have been reported act as potent scavengers of free radicals, providing an antioxidant effect as well as protecting against damage induced by gamma-radiation.

Biological Activities & Clinical ResearchWhile tayuya’s compounds have come under some scientific scrutiny (and many of the documented uses in herbal medicine could be explained by some of the activities of its chemicals), very little research has been performed on the biological activity of the plant itself. Two animal studies (performed in the early 1990s) do verify that root extracts provide analgesic and anti-inflammatory actions. One study documented that a root infusion given intragastrically to mice had an analgesic action. Another research group prepared the root in a methanol extract and reported mild anti-inflammatory actions when administered orally to mice. The latter group reported no toxic effects in mice (oral dosages of a methanol root extract) at 2 g per kg of body weight; however, an LD50 of 500 mg/kg was established when injected intraperitoneally. One in vitro study by Brazilian scientists reported that tayuya did not evidence any antimicrobial properties (against several common bacteria, fungi, and yeast microbes they tested).

Current Practical UsesOf recent (2003) concern, a widely-publicized marketing campaign was started in Europe regarding tayuya that is, at best, unscrupulous—if not outright fraudulent. It makes unsupported claims that the plant can cure many diseases including arthritis, impotence, and gout, and was discovered through the “Tayuyis” Indians in Brazil (who never existed). Other easily-recognized fallacies in their literature are that tayuya is “rare” (as it, supposedly, makes the soil sterile for 15–20 years!), and that the leaf is used indigenously (rather than the root, which is well-documented in literature dating back a century). European consumers should be aware that no clinical studies exist to support any of these wild claims, and that tayuya will not provide the benefits advertised. While tayuya has a long history of traditional use by herbalists in the United States and South America for all types pain and joint aches, it is at best a mild analgesic; it will not cure arthritis (nor any of the other diseases claimed in the marketing literature). It is unfortunate that a handful of unethical companies can affect the entire herbal products industry negatively with such scurrilous practices, but it continues to happen.

Although not widely available, tayuya is being employed by several companies as an ingredient in various herbal formulas (typically for pain, arthritis, and detoxification). Generally it is employed by South American herbalists in combination with other plants, and not as a monotherapy. Consumers and manufacturers should stick with reputable harvesters and importers for sourcing this particular tropical plant. The official plant that is sold as tayuya should be Cayaponia tayuya. One independent published survey in Brazil (the main exporter of the root), however, reported that almost any species of Cayaponia (of which about 40 different species exist in South America) is harvested, marketed, and sold as taiuiá in Brazil. They also reported that another completely different plant, Wilbrandia ebracteata, frequently has been found among the “taiuiá roots” sold in Brazilian herbal commerce.

Cautions: Large dosages may cause drowsiness.

Panossian, A., et al. “On the mechanism of action of plant adaptogens with particular reference to cucurbitacin R diglucoside.” Phytomedicine. 1999 Jul; 6(3): 147-55.

Ingredients: 100% pure tayuya root (Cayaponia tayuya). No binders, fillers or additives are used. It is a wild harvested product—grown naturally in the Brazilian Amazon without any pesticides or fertilizers.

Suggested Use: This plant is best prepared as an infusion (tea): Use one teaspoon of powder for each cup of water. Pour boiling water over herb in cup and allow to steep 10 minutes. Strain tea (or allow settled powder to remain in the bottom of cup) and drink warm. It is traditionally taken in 1 cup dosages, 2-3 times daily. For more complete instructions on preparing herbal infusions, see the Methods for Preparing Herbal Remedies Page.