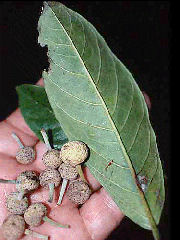 Tamamuri is a large canopy tree of the Amazon rainforest that grows 15 to 25 m high. It produces a white to light pink latex when the smooth trunk bark is wounded or the leaf stems are broken from the branches. It has oblong veined leaves about 8 to 15 cm long by 4-5 cm wide. Tamamuri is found throughout the lower elevations of the Amazon basin, usually growing alongside streams and rivers where its fruits (similar to a fig but with one large seed inside) are eaten by fish when it falls from the tree.

Tamamuri is in the Mulberry family and the Brosimum genus includes approximately 50 species of tropical and warm-temperate trees in South America.

Shipibo-Conibo Indians on the Ucayali River in the Peruvian Amazon have a legend about tamamuri. They believe that when a man ingests the white latex of the tamamuri tree that he will father light-skinned male children. They also use the bark medicinally (in decoctions) for gastro-intestinal disorders, to purify the blood and to regulate the nervous system. The Wayãpi Indians in Guyana also attribute magical properties to the tree. They believe the latex of the tree will help protect them from witchcraft and bad spells. They also prepare a decoction of the roots to treat headaches and to improve memory and put the bark in baths to treat fevers.

Tamamuri is a very common and well-respected remedy for rheumatism and arthritis throughout the Amazon and in traditional medicine systems in South America. It is also a very common remedy for syphilis, which is how it earned one of its common names, “vegetable mercury.” Mercury was the leading treatment for syphilis in the late 1800s and early 1900s. . . and before we knew any better!

In herbal medicine systems in Peru, tamamuri is considered a pain-reliever, anti-inflammatory, blood cleanser, aphrodisiac and tonic. It is used for arthritis and rheumatism (including rheumatoid arthritis), muscle pain and injuries, for intestinal worms, anemia, vertigo and loss of balance, to help regulate the nervous system, as a general tonic for debility, for fungal and yeast infections, gastric ulcers and gastrointestinal disorders, as well as for syphilis.

In Brazilian herbal medicine the tree is called mururé and it is widely used for arthritis, rheumatism and syphilis, as well as for gastric ulcers and skin ulcers, and as an aphrodisiac and tonic.

Tamamuri’s long-standing use for arthritis and rheumatism has been the subject of research by Western scientists. In 2003, Brazilian researchers reported that crude extracts of tamamuri bark reduced inflammation induced by various means in laboratory rats. Other researchers have reported that two chemicals in tamamuri (mururin A and B) have the ability to inhibit protein kinase C (PKC) and protein kinase A (PKA). PKC is involved with various conditions and is one of the chemicals that the body uses to actually produce inflammation. People with autoimmune disorders, arthritis, and rheumatoid arthritis usually have elevated PKC levels, and PKC inhibitors are a new class of drugs under research for these types of conditions.

In addition to autoimmune disorders and arthritis, PKC, as well as PKA, is also thought to play a role in cancer and tumor cell growth. Tamamuri’s ability to inhibit PKC and PKA might be the reason behind its documented actions against cancer cells. Researchers have reported that a crude extract of tamamuri bark was cytotoxic to human colon and lung cancer cell lines in vitro as well as toxic to a leukemia cell line (including a drug-resistant leukemic cell line). However, one of these research groups attributed the cytotoxic action, not to the PKC-inhibitor mururin chemicals, but to the newly discovered brosimacutin chemicals. They have yet to report the mechanism by which these new chemicals can kill cancer cells.

While scientists have yet to test tamamuri specifically against syphilis, researchers at Cornell University reported that tamamuri bark showed in vitro antibacterial actions against other common bacteria—Bacillus and Staphylococcus. This same study reported that it was also active against Helicobacter pylori (the bacteria that is the cause of stomach ulcers) as well as Candida albicans which confirms two other traditional uses of the bark: for gastric ulcers and yeast infections. They also reported that it was active against a common strain of skin fungus.

Toxicity studies with rats conducted in Brazil indicate that tamamuri is non-toxic and without any demonstrable negative side effects.

While American consumers have heard little about tamamuri yet, it remains a very popular remedy in Brazil and Peru for rheumatism and arthritis. It can be found in most of the South American medicinal plant markets, natural product stores and pharmacies. Only one or two tamamuri products are available in the U.S. natural products market today, but demand is likely to increase as more people learn about this wonderful rainforest tree and its many effective uses.

Suggested Use:* This plant is best prepared as a decoction. Use one teaspoon of powder for each cup of water. Bring to a boil and gently boil in a covered pot for 20 minutes. Allow to cool and settle for 10 minutes and strain warm liquid into a cup (leaving the settled powder in the bottom of the pan). It is traditionally taken in 1 cup dosages 3 times daily. For more complete instrutions on preparing herbal decoctions see the Methods for Preparing Herbal Remedies Page.

Share and Enjoy:
Tagged with: It is also a very common remedy for syphilis • Tamamuri is a very common and well-respected remedy for rheumatism and arthritis throughout the Amazon and in traditional medicine systems in South America • which is how it earned one of its common names vegetable mercury Mercury was the leading treatment for syphilis in the late 1800s and early 1900s. . . and before we knew any better!