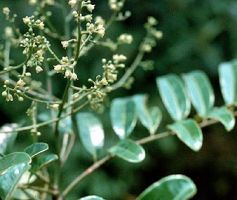 Simarouba is a medium-sized tree that grows up to 20 m high, with a trunk 50 to 80 cm in diameter. It produces bright green leaves 20 to 50 cm in length, small white flowers, and small red fruits. It is indigenous to the Amazon rainforest and other tropical areas in Mexico, Cuba, Haiti, Jamaica, and Central America.

The leaves and bark of Simarouba have long been used as a natural medicine in the tropics. Simarouba was first imported into France from Guyana in 1713 as a remedy for dysentery. When France suffered a dysentery epidemic from 1718 to 1725, simarouba bark was one of the few effective treatments. French explorers “discovered” this effective remedy when they found that the indigenous Indian tribes in the Guyana rainforest used simarouba bark as an effective treatment for malaria and dysentery – much as they still do today. Other indigenous tribes throughout the South American rainforest use simarouba bark for fevers, malaria, and dysentery, as a hemostatic agent to stop bleeding, and as a tonic.

Simarouba also has a long history in herbal medicine in many other countries. In Cuba, where it is called gavilan, an infusion of the leaves or bark is considered to be astringent, a digestion and menstrual stimulant and an antiparasitic remedy. It is taken internally for diarrhea, dysentery, malaria, and colitis; it is used externally for wounds and sores. In Belize the tree is called negrito or dysentery bark. There the bark (and occasionally the root) is boiled in water to yield a powerful astringent and tonic used to wash skin sores and to treat dysentery, diarrhea, stomach and bowel disorders, hemorrhages, and internal bleeding. In Brazil it is employed much the same way against fever, malaria, diarrhea, dysentery, intestinal parasites, indigestion, and anemia. In Brazilian herbal medicine, simarouba bark tea has long been the most highly recommended (and most effective) natural remedy against chronic and acute dysentery.

The main active group of chemicals in simarouba are called quassinoids, which belong to the triterpene chemical family. Quassinoids are found in many plants and are well known to scientists. The antiprotozoal and antimalarial properties of these chemicals have been documented for many years. Several of the quassinoids found in simarouba, such as ailanthinone, glaucarubinone, and holacanthone, are considered the plant’s main therapeutic constituents and are the ones documented to be antiprotozal, anti-amebic, antimalarial, and even toxic to cancer and leukemia cells.

After a 200-year documented history of use for dysentery, its use for amebic dysentery was finally validated by conventional doctors in 1918. A military hospital in England demonstrated that the bark tea was an effective treatment for amebic dysentery in humans. The Merck Institute reported that simarouba was 91.8% effective against intestinal amebas in humans in a 1944 study and, in 1962, other researchers found that the seeds of simarouba showed active anti-amebic activities in humans. In the 1990s scientists again documented simarouba’s ability to kill the most common dysentery-causing organism, Entamoeba histolytica, as well as two diarrhea-causing bacteria, Salmonella and Shigella.

Scientists first looked at simarouba’s antimalarial properties in 1947, when they determined a water extract of the bark (as well as the root) demonstrated strong activity against malaria in chickens. This study showed that doses of only 1 mg of bark extract per kg of body weight exhibited strong antimalarial activity. When new strains of malaria with resistance to our existing antimalarial drugs began to develop, scientists began studying simarouba once again. Studies published between 1988 and 1997 demonstrated that simarouba and/or its three potent quassinoids were effective against malaria in vitro as well as in vivo. More importantly, the research indicated that the plant and its chemicals were effective against the new drug-resistant strains in vivo and in vitro. While most people in North America will never be exposed to malaria, between 300 and 500 million cases of malaria occur each year in the world, leading to more than one million deaths annually. Having an easily-grown tree in the tropics where most malaria occurs could be an important resource for an effective natural remedy-it certainly has worked for the Indians in the Amazon for ages.

It will be interesting to see if North American scientists investigate simarouba as a possibility for North America’s only malaria-like disease: the newest mosquito-borne threat, West Nile virus. It might be a good one to study because, in addition to its antimalarial properties, clinical research has shown good antiviral properties with simarouba bark. Researchers in 1978 and again in 1992 confirmed strong antiviral properties of the bark in vitro against herpes, influenza, polio, and vaccinia viruses.

Another area of research on simarouba and its plant chemicals has focused on cancer and leukemia. The quassinoids responsible for the anti-amebic and antimalarial properties have also shown in clinical research to possess active cancer-killing properties. Early cancer screening performed by the National Cancer Institute in 1976 indicated that an alcohol extract of simarouba root (and a water extract of its seeds) had toxic actions against cancer cells at very low dosages (less than 20 mcg/ml). Following up on that initial screening, scientists discovered that several of the quassinoids in simarouba (glaucarubinone, alianthinone, and dehydroglaucarubinone) had antileukemic actions against lymphocytic leukemia in vitro and published several studies in 1977 and 1978. Researchers found that yet another simarouba quassinoid, holacanthone, also possessed antileukemic and antitumorous actions in 1983. Researchers in the UK cited the antitumorous activity of two of the quassinoids, ailanthinone and glaucarubinone, against human epidermoid carcinoma of the pharynx. A later study in 1998 by U.S. researchers demonstrated the antitumorous activity of glaucarubinone against solid tumors (human and mouse cell lines), multi-drug-resistant mammary tumors in mice, and antileukemic activity against leukemia in mice.

Simarouba is the subject of one U.S. patent so far and, surprisingly, it’s not for its antimalarial, anti-amebic, or even anticancerous actions. Rather, water extracts of simarouba were found to increase skin keratinocyte differentiation and to improve skin hydration and moisturization. In 1997, a patent was filed on its use to produce a cosmetic or pharmaceutical skin product. The patent describes simarouba extract as having significant skin depigmentation activity (for liver spots), enhancing the protective function of the skin (which maintains better moisturization), and having a significant keratinocyte differentiation activity (which protects against scaly skin).

While at least one scientific research group attempts to synthesize one or more of simarouba’s potent quassinoids for pharmaceutical use, the plant remains an important natural remedy in the herbal pharmacopeias of many tropical countries and in the rainforest shaman’s arsenal of potent plant remedies. Natural health practitioners outside of South America are just beginning to learn about the properties and actions of this important rainforest medicinal plant and how to use it in their own natural health practices.

Simarouba bark tea is still the first line of defense for amebic dysentery and diarrhea among the natural products available. It’s also a good natural remedy for viruses. Although not widely available in the U.S. today, it can be found in bulk supplies and in various natural multi-herb anti-parasite and anti-viral formulas.

Traditional Preparation: For diarrhea or dysentery, the traditional remedy calls for preparing a standard decoction with the bark. A teacup full (about 6 ounces) is taken 2-3 times daily. Five to ten ml of a bark tincture twice daily can be substituted if desired.

Caceres, A. “Plants used in Guatemala for the treatment of gastrointestinal disorders. 1. Screening of 84 plants against enterobacteria.” J. Ethnopharmacol. 1990; 30(1): 55–73.

Ingredients: 100% pure simarouba (Simarouba amara) bark. No binders, fillers or additives are used. It is a wild harvested product—grown naturally in the Brazilian Amazon without any pesticides or fertilizers.

Suggested Use: This plant is best prepared as a decoction. Use one teaspoon of powder for each cup of water. Bring to a boil and gently boil in a covered pot for 20 minutes. Allow to cool and settle for 10 minutes and strain warm liquid into a cup (leaving the settled powder in the bottom of the pan). It is traditionally taken in 1 cup dosages, 2-3 times daily. For more complete instructions on preparing herbal decoctions, see the Methods for Preparing Herbal Remedies Page.