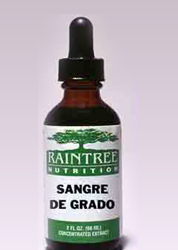 Scientists have attributed many of the biologically active properties of the resin to two main “active” constituents: an alkaloid named taspine, and a lignan named dimethylcedrusine.

For more complete information on this powerful plant of the rainforest, please see the Plant Database File on Sangre de Grado.

Raintree Nutrition’s sangre de grado resin has been sustainably wild-harvested in the Peruvian Amazon. It is rich in active and beneficial phytochemicals which occur naturally in this plant and is unconditionally guaranteed.

Raintree’s supply of sangre de grado comes from the high jungle of Peru where new organic cultivation programs with medicinal plants are replacing old coca plantations and providing new sources of income for poor farmers on their existing lands.

Ingredients: 100% pure sangre de grado resin (Croton lechleri). This plant has been sustainably wild-harvested (without pesticides or fertilizers) in the Brazilian Amazon and is non-irradiated and non-fumigated.

Suggested Use: Take 15 drops in water 1-2 times daily. Use topically by applying liberally to affected area of skin. Avoid contact with eyes.

Contraindications: Not to be used during pregnancy or breast-feeding.

Other Observations: Will stain clothing and other textiles.