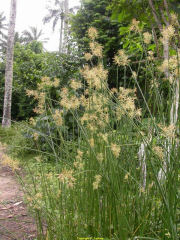 Piri-piri is a type of reed-like tropical grass called a “sedge-grass.” It can attain the height of 6 feet and grows in damp, marshy and flooded areas along the rivers and streams (where it can help control soil erosion) in the Amazon basin. It grows in clumps from dividing rhizomes which are about 2 cm long and 1.5 cm in diameter. The tall green stems are fibrous, round, and hollow and can be up to 3/4 in. wide at the base. Piri-piri stems have sometimes been used like reeds in basket-making and other crafts by the locals in the Amazon. It produces small, white, wheat-like flowers at the very top of its long stems.

Piri-piri is in the Cyperaceae plant family which include approximately 36 genera and about 128 species of Cyperus. Although native to the Amazon, piri-piri can be found in many other tropical areas and countries, including the southern United States, Africa, Asia, Australia, and across the South American continent. It can be found growing alongside the Nile River in Africa just as it grows alongside the Amazon River in South America.

The indigenous Indian tribes of the Amazon region ascribe magical properties to piri-piri. The tall stems and/or the rhizomes are dried and powdered, or are prepared as a tea and used as a good luck charm or a love potion (called a pusanga). Women will cultivate the plant and bathe their children with it to prevent sickness and injury, and give it to their husbands to bring good luck in hunting and fishing. Piri-piri is also well used as a medicine by the indigenous people and the rhizome is the part of the plant which is used.

The Shipibo-Conibo Indians of the Peruvian Amazon grind up the fresh rhizomes to extract the juice and use it for a nerve tonic in cases of stress and nervous and mental disorders (including epilepsy), to treat and prevent a wide range of digestive and gastrointestinal disorders, to facilitate child birth or to induce an abortion, as a contraceptive, and for throat cancer. It is also put on the head as a hair tonic and to treat or prevent baldness, and used externally to heal wounds and treat snake bite. The Secoya Indians in Ecuador mix the ground rhizome with water and use it to treat fever, flu, and to allay fright and nervousness. The Ese’eja Indians use it for diarrhea and dysentery.

In the Amazon region of the Guyanas (Surinam, Guyana, and French Guiana) ayapana is considered a febrifuge (reduces fever), alexiteric (anti-infective), sudorific (causes sweating), digestive, and laxative. A leaf infusion is employed for headaches, colds and flu, mouth sores and ulcers, and hypertension. The whole plant is decocted to relieve nausea and vomiting caused from malaria by the Palikur of French Guiana and this same decoction is used in Surinam for chronic diarrhea.

Piri-piri also has a long history of use in herbal medicine systems in South America. It is a very common remedy to treat nausea, vomiting, stomachaches, and intestinal gas throughout the continent. In Peru, piri-piri is considered as an abortifacient, anticonvulsant, anti-epileptic, antivenin, carminative, contraceptive, hemostat, nervine, stomachic, tonic and vulnerary. It is used for diarrhea, dysentery, digestive disorders and intestinal infections, intestinal worms, epilepsy, to stop bleeding (internally and externally) and to heal wounds. In Africa, piri-piri is used for malaria, toothaches, headaches, diarrhea, indigestion and coughs.

Piri-piri has also been around for quite a few years in the United States. In the late 1800s and early 1900s a fluid extract of the rhizome was prepared and sold as a herbal drug (called “adrue”) for the treatment of nausea, vomiting (including morning sickness), digestive disorders and intestinal gas. In herbal medicine systems in the U.S. piri-piri is attributed with anthelmintic, anti-emetic, carminative, demulcent, nervine, stomachic, tonic, and sedative actions.

Piri-piri contains flavonoids, polyphenols, saponins, tannins, terpenes and sugars. Many of its biological actions are attributed to various sesquiterpenes called cyperones which are also found in other Cyperus plants in the family. Two of these chemicals, called cyperotundone and alpha-cyperone, have been reported with antimalarial actions, as well as the ability to inhibit nitric oxide synthesis (a pro-oxidant), and prostaglandin synthetase (aspirin and ibuprofen are prostaglandin synthetase inhibitors).

Some of the more recent research on piri-piri has focused on its traditional uses to treat epilepsy and convulsions. Researchers in Africa have published several studies which suggest that piri-piri can mediate many of the brain chemical reactions which are required in epilepsy and report that the rhizome has anti-epileptic actions. In addition, other laboratory research with animals reports that piri-piri also has anti-convulsant actions, as well as sedative actions. Piri-piri was also reported with antioxidant actions, antibacterial actions against Staphylococcus and Pseudomonas, and anti-yeast actions against Candida. It passed a preliminary screening test to predict antitumor actions in other research.

Herbal practitioners in both South and North America usually turn to piri-piri to relieve nausea, vomiting, intestinal gas and diarrhea—its main uses in herbal medicine systems on both continents. Its use for epilepsy and convulsions is rather new in comparison to its long history of use for stomach complaints and no human trials exist yet for this purpose. People with epilepsy should not attempt to replace their prescribed drugs for epilepsy with this natural remedy until further research is available.

Traditional Preparation: While locals in the Amazon simply grind up or juice the rhizome in a little water to administer it, piri-piri is usually sold here in the U.S. and in pharmacies and stores in South America as a fluid extract or in capsules. The suggested dosage is 30 drops (2 ml) of a rhizome extract or 1-2 grams in capsules, as needed, to stop vomiting and to aid digestive and intestinal functions. See Traditional Herbal Remedies Preparation Methods page if necessary for definitions.

Contraindications: This plant has been traditionally used as a contraceptive aid. While no clinical studies exist to support this traditional use, women seeking to get pregnant should probably avoid the use of this plant.

Neville, G. A., et al. “Identification of ketones in Cyperus. NMR and mass spectral examination of the 2,4-dinitrophenylhydrazones.” Tetrahedron. 1968: 24 pp. 3891.

10. “Cyperus articulatus L. Cyperaceae. “Piripiri de vibora”. Cultivated. For snakebite, they chew the pulp, swallow the juice and poultice the cud onto the bite after it has bled. It is also considered abortive. Native Americans poke crushed stems in their nose to alleviate snoring (GMJ). “Secoyas” mixed ground rhizome with water for fever, flu and fright (SAR). In Piura, the chopped shoots are considered hemostatic and vulnerary (FEO).”

Amongst the Secoya, the rhizome is ground and mixed with water to cure tuturawi or mal de viento in Spanish (a psychological affliction of fright); it is also taken to treat grippe or fevers.”

Unproven Uses: Preparations of the root are used for digestive disorders, nausea and flatulence.

Health risks or side effects following the proper administration of designated therapeutic dosages are not recorded.

Mode of Administration: Available as a liquid extract for internal use.

Ingredients: 100% pure piri-piri rhizome (Cyperus articulatus). No binders, fillers or additives are used. This plant is non-irradiated and not fumigated, and has grown naturally in the Peruvian Amazon without pesticides or fertilizers.

Suggested Use:* Piri-piri is traditionally prepared in a cold maceration. Simply stir 1 teaspoon of the powder into a cup of water or juice and drink twice daily. It can also be stuffed into capsules or prepared as a tea (1 tsp of powder to a cup of hot water). For more complete instrutions on preparing herbal remedies see the Methods for Preparing Herbal Remedies Page.

Contraindications: This plant has been traditionally used as a contraceptive aid. While no clinical studies exist to support this traditional use, women seeking to get pregnant should probably avoid the use of this plant.