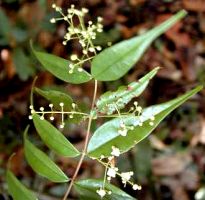 Pedra hume caá is a medium-sized shrub that grows in drier regions of the Amazon and other parts of Brazil. It has small, green leaves and large, orange-red flowers. A member of the myrtle family, it is one of more than 150 species of Myrcia indigenous to tropical South America and the West Indies. In Brazil, the common name pedra hume caá refers to three species of Myrcia plants which are used interchangeably—Myrcia salicifolia, M. uniflorus, and M. sphaerocarpa.

Pedra hume caá has been used by indigenous tribes in the rainforest for diabetes, diarrhea, and dysentery. The Taiwanos tribe (in northwest Amazonia) considers the leaves to be astringent and use it for persistent diarrhea. It has had a place in Brazilian traditional medicine for many years. Dr. G. L. Cruz, a leading Brazilian practitioner and herbalist, nicknamed it “vegetable insulin” in 1965. Dr. Cruz noted in his book Livro Verde das Plantas Medicinais e Industriais do Brasil that “one uses all parts of the plant in infusions, decoctions or extracts to combat diabetes. Specialists that have made careful study of medicinal plants affirm that the regular use of this plant produces surprising results in the treatment of this ailment, as in a short space of time the sugar disappears from the urine. Hence the name ‘vegetable insulin.’” Even 30 years later, Dr. Cruz and other Brazilian researchers and practitioners are recording the actions and uses of pedra hume caá for diabetes in much the same manner. It remains a very popular natural remedy for diabetes throughout South America; the traditional use is a simple leaf tea with a pleasant, slightly sweet taste. It is also used for diarrhea, hypertension, enteritis, hemorrhages, and mouth ulcers.

Phytochemical analysis of pedra hume caá reveals a high content of flavonoids, flavonols, and flavanones. In 1998, Japanese researchers reported the discovery of several novel and biologically active phytochemicals. These new flavanone glucosides were named myrciacitrins I and II; the new acetophenone glucosides were named myrciaphenones A and B. Their published study reported that a methanol extract of pedra hume caá (as well as these novel chemicals) demonstrated potent inhibitory activities on aldose reductase and alphaglucosidase.

Aldose reductase inhibitors (ARIs) are substances that act on nerve endings exposed to high blood sugar concentration to prevent some of the chemical imbalances that occur, and thus protect the nerves. Alpha-glucosidase inhibitors delay the digestion and subsequent absorption of sugar in the gastrointestinal tract. For this reason, the novel compounds in pedra hume caá that act upon aldose and glucosidase were seen to be (at least partially) responsible for pedra hume caá’s blood sugar-balancing properties. Various ARIs (both synthetic and natural) are being studied by researchers; it is believed that these compounds may be helpful in reducing or preventing some side effects of diabetes — including diabetic neuropathy and macular degeneration.

Brazilian scientists have documented leaf extracts of pedra hume caá with hypoglycemic activity since 1929. Two clinical studies published in the 1990s again demonstrated its hypoglycemic activity and confirmed its traditional use for diabetes. In a 1990 double-blind placebo clinical study with normal and Type II diabetic patients, pedra hume caá (3 g powdered leaf daily) demonstrated the ability to lower plasma insulin levels in the diabetic group. In a 1993 study, 250 mg/kg of a leaf extract demonstrated the ability to reduce appetite and thirst, and to reduce urine volume, urinary excretion of glucose and urea in diabetic rats. The extract also inhibited the intestinal absorption of glucose. This study concluded that “aqueous extracts of Myrcia have a beneficial effect on the diabetic state, mainly by improving metabolic parameters of glucose homeostasis.”

Pedra hume caá continues to be one of the more popular natural remedies for diabetes throughout South America, where it is widely known. The studies with animals and humans have confirmed its safety and no toxic effects or side effects were noted. It is hoped that, with the growing diabetes epidemic in North America, health practitioners here will look for natural alternatives and incorporate this wonderful rainforest remedy into their natural health practices. These tropical shrubs grow very quickly and growth is encouraged by pruning. A single shrub can be harvested of its leaves by hard pruning 4 times a year or more – producing approximately 50-60 kg of leaves annually. It is truly a wonderful and sustainable resource the rainforest offers!

Cautions: It lowers blood sugar levels. It is contraindicated in hypoglycemia. Diabetics should monitor their glucose levels closely.

Traditional Preparation: One cup of leaf infusion 2-3 times daily with meals. One to 2 g of leaf powder in tablets or capsules with meals can be substituted if desired. See Herbal Preparation Methods instructions if necessary.

Pedra hume caá has been documented to lower blood sugar levels in animal and human studies. It is contraindicated in those with hypoglycemia. Diabetics who wish to use this plant should seek the advice and supervision of a qualified health care practitioner while using this plant, as blood sugar levels will need to be monitored carefully and medications may need adjustments.

Pedra hume caá has been used in South American herbal medicine for hypertension. This use has not been substantiated or confirmed by clinical research. Those with low blood pressure and/or those on medications to lower their blood pressure should use this plant with caution and closely monitor these possible effects.

1. “Animal research in foreign countries has proven Pedra Hume Caa’s efficacy in treating diabetes in dogs and rabbits. When humans were tested, it was found to be more effective in cases of adult-onset diabetes than juvenile diabetes. Pedra Hume Caa is called “vegetable insulin.” It has been used traditionally to eliminate the sugar from the urine of diabetics. It is also used to treat diarrhea.”2. “Pedra huma-caa, nicknamed ‘vegetable insulin,” has been researched in Brazil for the treatment of diabetes. It was used by early South American Indians as a powerful healing poultice.”

3. “Pedra Huma-Caa, nicknamed “vegetable insulin” has been the subject of studies in Brazil for the treatment of diabetes.”

8. “Pedra Huma-Caa contains a lot of tannin and its astringent action makes it a very useful plant. Brazilian uses and folklore: Pedra Huma-Caa tea is taken in Brazil to help relieve the symptoms of diabetes.”

The leaves are considered by the Taiwanos to be efficacious against persistent diarrhea. The dried leaves are mixed with farina they are said to be astringent and, if taken in excess, to be emetic.”

Yoshikawa, M., et al. “Antidiabetic principles of natural medicines. II. Aldose reductase and alpha-glucosidase inhibitors from Brazilian natural medicine, the leaves of Myrcia multiflora DC (myrtaceae): structures of myrciacitrins I and II and myrciaphenones A and B.” Chem. Pharm. Bull. 1998; 46(1): 113–19.

Ingredients: 100% pure pedra hume caá (Myrcia salicifolia) leaves. No binders, fillers or additives are used. It is a wild harvested product—grown naturally in the Brazilian Amazon without any pesticides or fertilizers.

Suggested Use: This plant is best prepared as an infusion (tea). Use one teaspoon of powder for each cup of water. Pour boiling water over herb in cup and allow to steep 10 minutes. Strain tea (or allow settled powder to remain in the bottom of cup) and drink warm. It is traditionally taken in 1 cup amounts, 2-3 times daily. For more complete instructions on preparing herbal infusions see the Methods for Preparing Herbal Remedies Page.