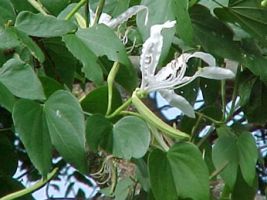 Pata de vaca is a small tree that grows 5-9 m tall. Its leaves are 7-10 cm long and shaped like a cow’s hoof, which is distinctive to the Bauhinia genus. Its Brazilian name, pata de vaca, translates to cow’s foot. It produces large, drooping white flowers and a brown seed pod resembling that of mimosa. It can be found in the rainforests and tropical parts of Peru and Brazil, as well as in tropical zones of Asia, eastern Paraguay, and northeastern Argentina. It is quite prevalent in Rio de Janeiro and Brazil’s Atlantic rainforest to the south. The Bauhinia genus comprises about 500 species of shrubs, small trees, and lianas in the tropics – most of which bears the distinctive cow’s hoof shaped leaves.

The indigenous uses of pata de vaca are not well documented, but it has long held a place in Brazilian herbal medicine. It has been described as hypoglycemic, a blood purifier and a diuretic, and has been used for over 60 years to balance blood sugar levels in diabetics. It is considered a good blood cleanser, and a leaf decoction is used internally and externally for elephantiasis and snakebite, as well as other skin problems (including those of a syphilitic nature). It is a highly regarded treatment for diabetes, even being called “vegetable insulin.” As such, it is used in South America to help balance blood sugar levels and to alleviate other symptoms of diabetes (such as polyuria, kidney disorders, and other urinary problems). Pata de vaca leaves and tea bags are common items on pharmacy shelves in South America; traditionally, a leaf tea (standard infusion) is drunk after each meal to help balance sugar levels.

Scientists have studied the constituents of pata de vaca and quantified them, however; little research has been done to determine which novel chemicals have biological activity. The leaves do contain a well-known antibacterial chemical called astragalin as well as flavonoids, alkaloids, and glycosides. The leaves are also a good source of a flavonoid called kaempferitrin. This chemical has been reported to help repair kidney cell damage, and to have a diuretic effect. The main plant chemicals in pata de vaca include astragalin, bauhinoside, beta-sitosterol, flavonols, flavonoids, glycosides, guanidine, heteroglycosides, kaempferitrin, organic acids, quercitrosides, rhamnose, and saponins.

Pata de vaca’s ability to lower blood sugar was first reported by a Brazilian researcher in an in vivo 1929 clinical study, which was followed by another in vivo (dog) study in 1931. The same Brazilian researcher published another study in 1941, reporting the blood sugar-lowering effects of pata de vaca in humans, dogs, and rabbits. A study was funded in 1945 to determine the active constituents responsible for its activity. Since a simple leaf tea was shown to help balance sugar levels, it became a popular natural remedy, however, no subsequent studies were done for many years due to a lack of funding for nonproprietary remedies and drugs.

In the mid-1980s, however (when herbal remedies again were popular), pata de vaca’s continued use as a natural insulin substitute was reiterated in two Brazilian studies. Both studies reported in vivo hypoglycemic actions in various animal and human models. Chilean research in 1999 reported the actions of pata de vaca in diabetic rats. Their study determined that pata de vaca was found to “elicit remarkable hypoglycemic effects,” and brought about a “decrease of glycemia in alloxan diabetic rats by 39%.” In 2002, two in vivo studies on the blood-sugar-lowering effects of pata de vaca were conducted by two separate research groups in Brazil. The first study reported “a significant blood glucose-lowering effect in normal and diabetic rats.” In the second study, 150 g of the leaf (per liter of water) was given to diabetic rats as their drinking water. Researchers reported that, after one month, those receiving pata de vaca had a “significant reduction in serum and urinary glucose and urinary urea . . .” as compared to the control group.

Pata de vaca continues to be a popular natural medicine in South America for diabetes and clinical research there supports its use. A standard infusion is brewed and drunk after each meal, and pata de vaca is often combined with pedra hume caá (another South American plant featured in this book) for this after-meal tea. North American practitioners and herbalists are now using it for diabetes, hyperglycemia, and polyuria.

Cautions: Diabetics should use under doctor supervision as insulin medications may need adjusting.

1. “The Brazilians discovered that Pata de Vaca can be used as an insulin substitute for diabetics. It combats the polyuria (frequent urination) that accompanies diabetes and normalizes the frequency of urination. It also prevents hyperglycemia, (high blood sugar). Pata de Vaca may have diuretic properties in non-diabetics.”

2. “Pata-de-vaca has been widely used in Brazil for treatment of diabetes.”

3. “Pata-De-Vaca is widely used in Brazil to combat diabetes.”

8. “Brazilian uses and Folklore: In his book, “Cura com Yoga e Plantas Medicinais” Chiang Sing recounts the experience of one Friar Luiz Maria. This priest was a diabetic. In the early 1950’s, Friar Luiz Maria heard about a plant that could cure the symptoms of diabetes. He travelled to Campo Grande in search of a doctor named Christophe, who made preparations from this plant. Dr. Christophe himself had learned about this plant from the Indians and local farmers. The Friar met Dr. Christophe, took the extract made from Pata-de-Vaca, and in 40 days he was in fine condition (p. 160). Pata-de-Vaca has been widely used for years, but it is only recently that clinics and pharmacologists have begun to study the plant that has so long received public praise. As an herbal tea Pata-de-Vaca is often taken together with Pedra Hume Caa. Uses: Helpful in treating diabetes. Used in homeopathy as a mother tincture.”

Ingredients: 100% pure pata de vaca (Bauhinia forficata) leaves. No binders, fillers or additives are used. It is a wild harvested product—grown naturally in the Brazilian Amazon without any pesticides or fertilizers.

Suggested Use: This plant is best prepared as an infusion (tea). Use one teaspoon of powder for each cup of water. Pour boiling water over herb in cup and allow to steep 10 minutes. Strain tea (or allow settled powder to remain in the bottom of cup) and drink warm. It is traditionally taken in 1 cup amounts, 2-3 times daily. For more complete instructions on preparing herbal infusions see the Methods for Preparing Herbal Remedies Page.

Contraindications: Pata de vaca has demonstrated in animal and human studies to lower blood sugar levels. It is contraindicated in those with hypoglycemia.

Share and Enjoy:
Tagged with: a blood purifier and a diuretic • a good blood cleanser • Hypoglycemic: • to balance blood sugar levels in diabetics • used internally and externally for elephantiasis and snakebite