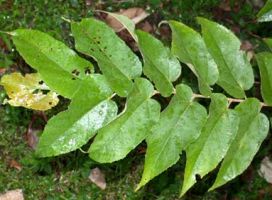 Mutamba is a medium-sized tree that grows up to 20 m high, with a trunk 30 to 60 cm in diameter. Its oblong leaves are 6 to 12 cm long, and the tree produces small white-to-light-yellow flowers. It produces an edible fruit that is covered with rough barbs and has a strong honey scent. Mutamba is indigenous to tropical America on both continents and found throughout the Amazon rainforest.

Mutamba is called guasima or guacima in Mexico, where it has a very long history of indigenous use. The Mixe Indians in the lowlands of Mexico use a decoction of dried bark and fruit to treat diarrhea, hemorrhages and uterine pain. The Huastec Mayans of northeastern Mexico employ the fresh bark boiled in water to aid in childbirth, for gastrointestinal pain, asthma, diarrhea and dysentery, wounds, and fevers. Mayan healers in Guatemala boil the bark into a decoction to treat stomach inflammation and regular stomachaches. Mutamba was a magical plant to the ancient Mayans who also used it against “magical illnesses” and evil spells. In the Amazon, indigenous people have long used mutamba for asthma, bronchitis, diarrhea, kidney problems, and syphilis. They use a bark decoction topically for baldness, leprosy, dematosis and other skin conditions.

Mutamba holds a place in herbal medicine systems in many tropical countries; chiefly the bark and leaves are used. In Belizean herbal medicine practices, a small handful of chopped bark is boiled for 10 minutes in 3 cups of water and drunk for dysentery and diarrhea, for prostate problems, and as a uterine stimulant to aid in childbirth. A slightly stronger decoction is used externally for skin sores, infections, and rashes. In Brazilian herbal medicine practices, a bark decoction is used to promote perspiration, cleanse and detoxify the blood, and to suppress coughs. There it is used for fevers, coughs, bronchitis, asthma, pneumonia, syphilis, and liver problems. A bark decoction is also prepared and is used topically to promote hair growth, to combat parasites of the scalp, and to treat various skin conditions. In Peru, the dried bark and/or dried leaves are made into tea (standard infusion) and used for kidney disease, liver disease, and dysentery. There the bark is also used topically for hair loss. In Guatemala, the dried leaves of the tree are brewed into a tea and drunk for fevers, kidney disease, and skin diseases, as well as used externally for wounds, sores, bruises, dermatitis, skin eruptions and irritations, and erysipelas.

Mutamba bark is a rich source of tannins and antioxidant chemicals called proanthocyanidins. One in particular, procyanidin B-2, helps validate mutamba’s long standing use in several countries for hair loss and baldness. In 1999, researchers in Japan reported that procyanidin B-2 was a safe topical hair-growing agent. From 2000 to 2002, they published three in vitro and in vivo (in balding men) studies showing that procyanidin B-2 promoted hair cell growth and increased the total number of hairs on a designated scalp area. Researchers have determined that mutamba bark is a rich source of this natural chemical compound. Other independent research indicates that procyanidin B-2 also has antitumorous and anticancerous effects (even against melanoma) as well as lowers blood pressure and protects the kidneys. The bark also contains a chemical called kaurenoic acid which has been documented with antibacterial and antifungal properties in many studies over the years. The leaves of mutamba contain caffeine, however none has been found in the bark of the tree.

Mutamba’s long history of effective uses in herbal medicine propelled researchers to begin studying its properties and activities in the laboratory (beginning in 1968). It has been the subject of numerous studies since. In the first study published, using various animals (rats, rabbits, guinea pigs, cats and insects), reported that it lowered heart rate and blood pressure, relaxed smooth muscles and stimulated the uterus. Two years later, another researcher reconfirmed the uterine stimulant effects in rats, validating its historical uses as a uterine stimulant and childbirth aid. In eight different studies from 1987 to 2003, various leaf and bark extracts have clinically demonstrated remarkable antibacterial activity in vitro against several disease-causing pathogens, including Bacillus, Staphylococcus, Streptococcus, E. coli, and Neisseria gonorrhea. One of the recent 2003 studies also confirmed its antioxidant effects. In a 1995 in vitro study, mutamba also demonstrated antiviral activity against Herpes simplex type 1.

These studies could certainly explain why mutamba has been used so effectively in herbal medicine systems for many types of gastrointestinal problems, such venereal diseases as gonorrhea and syphilis, and upper respiratory conditions (pneumonia and bronchitis). Subsequent research focusing on particular chemicals found in mutamba documented their ability to interfere with an enzyme process by which bacteria and pathogens replicate. Scientists showed that these chemicals interacted with a cholera toxin-preventing its toxicity and the resultant diarrhea.

Traditionally a decoction of mutamba leaves has been used in Mexico for diabetes. It has only been recently (in 1998) that researchers in Mexico validated this indigenous use, publishing a study showing that a leaf extract significantly decreased hyperglycemia in rabbits. Of particular note (in 1990), a Brazilian research group demonstrated that a crude extract of mutamba bark was toxic to cancer cells in vitro, exhibiting a 97.3% inhibition rate. In yet another recent study (in 2002), Belgium researchers reported the possible mechanism by which mutamba bark reduces hypertension – it inhibits an enzyme called angiotensin II. Angiotensin inhibitors represent a newer classification of heart drugs (newer than the ACE-inhibitors) which are now being prescribed to lower blood pressure.

Research continues to document the unique properties and actions of this plant while validating its traditional uses. Mutamba is a favorite natural remedy among Central and South American health practitioners and the indigenous peoples of the Amazon. It is often turned to first for upper respiratory infections as it can quiet coughs, reduce fever, as well as provides antiviral and antibacterial actions. It will be interesting to see if anyone in North or South America follows up on the research concerning hair loss and utilizes mutamba as a natural product for baldness and hair loss prevention. There certainly is a ready (and very profitable) market for products such as these. . . especially if they are effective!

Cautions: Use with caution and under doctor supervision if you have a heart condition.

Traditional Preparation: The traditional remedy for upper respiratory infections, asthma and other respiratory problems is one cup of a standard bark decoction 2-3 times daily. For gastrointestinal problems and other conditions the same bark decoction is used or 2-3 ml of a 4:1 tincture twice daily or one to 2 grams of powdered bark daily in tablets or capsules or stirred into water or juice can be substituted if desired. The same bark decoction is rinsed through the hair several times weekly as a natural remedy for hair loss. See Traditional Herbal Remedies Preparation Methods page if necessary for definitions.

Mutamba bark has been documented in several animal studies to have uterine stimulant activity and it should not be taken during pregnancy.

Mutamba bark has been documented in animal studies to lower blood pressure. In vitro studies indicate that it can inhibit angiotensin II. People with a history of heart problems, those taking heart medications, or those with low blood pressure should not use this plant without supervision and advice of a qualified health care practitioner.

Drug Interactions: None published; however, mutamba bark may potentiate the action of certain antihypertensive drugs.

GUAZUMA ULMIFOLIA Lam. West Indian elm (E); Bastard cedar (J); Cabeza de Negrito (P); Guacimo (C,P) . The green fruits of this honey tree are edible fresh or cooked, and are relished by cattle. They are crushed in water to make a beverage, and to add flavor to meats. The leaves and fruits are eaten by cattle and deer. The bark is used for cordage, and is regarded as sudorific. It is used to treat elephantiasis, cutaneous diseases, and chest afflictions. The sap is used to clarify syrup in sugar-making, and was used for food and shaving cream in Colombia. In Darien, the uncooked bark is soaked with malva to drink for afflictions of the kidney and liver. In the Pearl Islands, people believe that touching the tree will slow bleeding.

Caceres, A., et al. “Anti-gonorrhoeal activity of plants used in Guatemala for the treatment of sexually transmitted diseases.” J. Ethnopharmacol. 1995; 48(2): 85–88.

Caceres, A., et al. “Plants used in Guatemala for the treatment of gastrointestinal disorders. 3. Confirmation of activity against enterobacteria of 16 plants.” J. Ethnopharmacol. 1993; 38(1): 31–38.

Caceres, A., et al. “Screening of antimicrobial activity of plants popularly used in Guatemala for the treatment of dermatomucosal diseases.” J. Ethnopharmacol. 1987; 20(3): 223–37.

Saito, A., et al. “Systematic synthesis of galloyl-substituted procyanidin B1 and B2, and their ability of DPPH radical scavenging activity and inhibitory activity of DNA polymerases.” Bioorg. Med. Chem. 2005 Apr; 13(8): 2759-71.

Ingredients: 100% pure mutamba (Guazuma ulmifolia) bark. No binders, fillers or additives are used. This product is non-irradiated and non-fumigated. It is a wild harvested product—grown naturally in the Brazilian Amazon without any pesticides or fertilizers.

Suggested Use: This plant is best prepared as a decoction. Use one teaspoon of powder for each cup of water. Bring to a boil and gently boil in a covered pot for 20 minutes. Allow to cool and settle for 10 minutes and strain warm liquid into a cup (leaving the settled powder in the bottom of the pan). It is traditionally taken in 1 cup dosages, 2-3 times daily. For more complete instructions on preparing herbal decoctions see the Methods for Preparing Herbal Remedies Page.

Mutamba bark has been documented in animal studies to have uterine stimulant activity and it should not be taken during pregnancy.

Mutamba bark has been documented in an animal study to lower blood pressure. In vitro studies indicate that it can inhibit angiotensin II. People with low blood pressure should use with caution while monitoring their blood pressure accordingly.

Drug Interactions: None published; however, mutamba bark may potentiate the action of certain antihypertensive drugs.

Share and Enjoy:
Tagged with: independent research indicates that procyanidin B-2 also has antitumorous and anticancerous effects even against melanoma • kaurenoic acid which has been documented with antibacterial and antifungal properties • lowers blood pressure and protects the kidneys