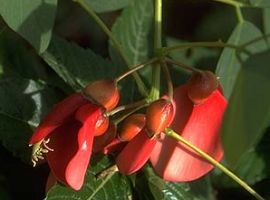 Mulungu is a medium-sized, well-branched tree that grows 10-14 m high. It produces a profusion of pretty, reddish-orange flowers (pollinated by hummingbirds) at the ends of the tree’s many branches. The tree is sometimes called “coral flower,” as the flowers resemble the color of orange coral. It produces black seed pods containing large, red-and-black seeds, which are sometimes used by indigenous peoples to make necklaces and jewelry. Mulungu is indigenous to Brazil, parts of Peru, and tropical areas in Latin America and, typically, is found in marshes and along riverbanks. The Erythrina genus comprises more than 100 species of trees and shrubs (mostly all heavily armed with spines or thorns) in the topical and subtropical regions of both hemispheres. The mulungu tree (first recorded in 1829) is known by two botanical names, Erythrina mulungu and Erythrina verna. Another closely-related species, E. crista-galli, is used interchangeably in South American herbal medicine systems and is found farther south on the South American continent. The flower of E. crista-galli is the national flower of Argentina.

In both North and South American herbal medicine systems mulungu is considered to be an excellent sedative to calm agitation and nervous coughs and to treat other nervous system problems including insomnia and anxiety. It also is widely used for asthma, bronchitis, gingivitis, hepatitis, inflammation of the liver and spleen, intermittent fevers, and to clear obstructions in the liver. In both Brazil and Peru mulungu is used for epilepsy. Herbalists and practitioners in the United States use mulungu to quiet hysteria from trauma or shock, as a mild, hypnotic sedative to calm the nervous system, to treat insomnia and promote healthy sleeping patterns (by sedating overactive neurotransmitters), to regulate heart palpitations, and to treat hepatitis and liver disorders. Positive regulatory effects on heart palpitations and decreased blood pressure have been reported; Dr. Donna Schwontkowski, a chiropractor who has used Amazonian plants in her practice, recommends mulungu for hernias, stomachaches, and epilepsy – and to help augment milk flow as well.

The chemicals in mulungu have been studied extensively; they have been found to comprise large amounts of novel flavonoids, triterpenes, and alkaloids. Much research has been performed on Erythrina alkaloids in the last decade, as they represent a group of very active chemicals with various properties and are almost always present in Erythrina species. Thus far, alkaloids have been found in 78 of 107 species in the genus Erythrina; mulungu is documented with 20 isoquinoline alkaloids. Many of these have demonstrated anti-inflammatory, cardioactive, narcotic, and sedative activities. One novel alkaloid discovered in mulungu is called cristamidine. Its positive effect on the liver was demonstrated in a 1995 clinical study with rats. Mulungu’s hypotensive and heart-regulatory activities were studied and attributed to its alkaloids. Another alkaloid in mulungu (and other Erythrina plants), erysodine, has been documented with neuromuscular effects characteristic of curare arrow poisons. Two studies also indicate that it might be useful as an anti-nicotine drug, as it demonstrated actions as a competitive antagonist and to block nicotine receptors. Interestingly, both of these studies were published by major (and competing) pharmaceutical companies!

The traditional use of mulungu for anxiety and stress has been validated by researchers in a recent (2002) study, where it was shown to alter anxiety-related responses. An animal model (correlating to human generalized anxiety disorder, as well as panic disorder) was undertaken on a water-alcohol extract of mulungu. The researchers reported that the mulungu extract had an effect similar to the commonly-prescribed anti-anxiety drug diazepam. It was suggested in this study that the alkaloids in Erythrina “may alter GABAergic neurotransmission.” GABA (gamma-amino butyric acid) acts as a neurotransmitter in the brain; abnormalities with its function is implicated in diseases including epilepsy, anxiety, and depression. Further research has validated the traditional use of mulungu as an antimicrobial agent for throat and urinary infections; mulungu has demonstrated antibacterial activity in two studies against Staphylococcus aureus, and antimycobacterial activity against Mycobacterium fortuitum and Mycobacterium smegmatis.

Mulungu is not very widely known or used in North America; mostly appearing as an ingredient in only a few herbal formulas for anxiety or depression. It is a wonderful rainforest medicinal plant that is deserving of much more attention in herbal medicine systems outside of South America. The main herbal remedy sold in America today for stress, anxiety and as a general sedative is kava-kava. This plant however, has had some negative press in recent years concerning possible negative effects to the liver. Since mulungu provides the same calming and stress relieving effects (if not better), and actually has a positive effect on the liver; it is poised as the new replacement for this highly popular (and profitable) herbal supplement.

Traditional Preparation: One-half cup of a standard bark or root decoction or 1-2 ml of a 4:1 tincture once or twice daily.

This plant is a sedative and may cause drowsiness.

Drug Interactions: None documented; however, mulungu may potentiate some antianxiety drugs (such as diazepam) and antihypertensive drugs.

2. “Mulungu has been used to quiet hysteria from trauma or shock. It helps to balance neurotransmitters and promote peaceful sleep. It can help regulate heart palpitations and helps to regulate excess heart yang. It also can be used for hepatitis and liver dysfunctions.”

11.” Mulungu is used in Brazil and Peru as a mild hypnotic sedative to calm the nervous system, eliminate hysteria, decrease insomnia and promote healthy sleeping patterns by sedating overactive neurotransmitters. Mulungu has also been used to treat epilepsy.”

Hidalgo, A., et al. “Differential expression of glycans in the hippocampus of rats trained on an inhibitory learning paradigm.” Neuropathology. 2006 Dec; 26(6): 501-7.

Ingredients: 100% pure mulungu bark (Erythrina mulungu). No binders, fillers or additives are used. It is a wild harvested product—grown naturally in the Brazilian Amazon without any pesticides or fertilizers.

Suggested Use: This plant is best prepared as a decoction. Use one teaspoon of powder for each cup of water. Bring to a boil and gently boil in a covered pot for 20 minutes. Allow to cool and settle for 10 minutes and strain warm liquid into a cup (leaving the settled powder in the bottom of the pan). It is traditionally taken in 1/2 cup amounts twice daily. For more complete instructions on preparing herbal decoctions, see the Methods for Preparing Herbal Remedies Page.

This plant is traditionally used as a sedative and may cause drowsiness.

Mulungu has demonstrated hypotensive actions in animal studies. It is probably contraindication in persons with low blood pressure.

Drug Interactions: None documented; however, mulungu may enhance the effect of some antianxiety drugs and blood pressure drugs.

Share and Enjoy:
Tagged with: an excellent sedative to calm agitation and nervous coughs • Bronchitis • Gingivitis • Hepatitis • inflammation of the liver and spleen intermittent fevers and to clear obstructions in the liver. • to treat other nervous system problems including insomnia and anxiety • widely used for asthma