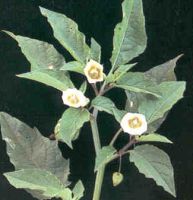 Mullaca is an annual herb indigenous to many parts of the tropics, including the Amazon. It can be found on most continents in the tropics, including Africa, Asia, and the Americas. It grows up to 1 m high, bears small, cream-colored flowers, and produces small, light yellowish-orange, edible fruit sometimes referred to as cape gooseberry. The fruit is about the size of a cherry tomato, and like tomatoes, it contains many tiny edible seeds inside. Mullaca propagates easily from the many seeds the fruit contains; spontaneous clumps of plants can be found along river banks and just about anywhere the soil is disturbed and the canopy is broken (allowing enough sunlight to promote its rapid growth).

Mullaca has long held a place in natural medicine in the tropical countries where it grows. Its use by rainforest Indians in the Amazon is well documented, and its edible sweet-tart fruits are enjoyed by many rainforest inhabitants, animal and human alike. Indigenous tribes in the Amazon use a leaf infusion as a diuretic. Some Colombian tribes believe the fruits and leaves have narcotic properties and also decoct them as an anti-inflammatory and disinfectant for skin diseases; others use a leaf tea for asthma. Indigenous peoples in the Peruvian Amazon use the leaf juice internally and externally for worms and the leaves and/or roots for earache, liver problems, malaria, hepatitis, and rheumatism. Indigenous tribes in the Brazilian Amazon use the sap of the plant for earaches and the roots for jaundice. Mullaca has also been used by indigenous peoples for female disorders. In the Solomon Islands, the fruit of mullaca is decocted and taken internally to promote fertility. A tea is made of the entire plant and/or the leaves in the West Indies and Jamaica to prevent miscarriages. In Peru the leaf is infused and used to treat postpartum infections.

Mullaca is employed in herbal medicine systems today in both Peru and Brazil. In Peruvian herbal medicine the plant is called mullaca or bolsa mullaca. To treat diabetes, the roots of three mullaca plants are sliced and macerated in 1/4 liter of rum for seven days. Honey is added, and 1/2 glass of this medicine is taken twice daily for 60 days. In addition, an infusion of the leaves is recommended as a good diuretic, and an infusion of the roots is used to treat hepatitis. For asthma and malaria, the dosage is 1 cup of tea made from the aerial parts of the plant. In Brazilian herbal medicine the plant is employed for chronic rheumatism, for skin diseases and dermatitis, as a sedative and diuretic, for fever and vomiting, and for many types of kidney, liver, and gallbladder problems.

Phytochemical studies on mullaca reveal that it contains many types of biologically active, naturally occurring chemicals including flavonoids, alkaloids, and many different types of plant steroids, some of which have never before been seen in science. Mullaca has been the subject of recent clinical research (which is still ongoing), based on the preliminary studies showing that it is an effective immune stimulant, is toxic to numerous types of cancer and leukemia cells, and that it has antimicrobial properties. The new steroids found in mullaca have received the most attention, and many of the documented anti-cancerous, anti-tumorous and anti-leukemic actions are attributed to these steroids.

Various extracts of mullaca, as well as these extracted plant steroids called physalins, have shown strong in vitro and in vivo (mice) activity against numerous types of human and animal cancer cells including lung, colon, nasopharynx, liver, cervix, melanoma and glioma (brain) cancer cells. This cancer research began in the early 1980s with researchers in Thailand and the U.S. and was verified with research performed at the University of Taiwan in 1992 (where they demonstrated a significant effect against five human cancer cell lines and three animal cancer cell lines). Then in 2001, researchers at the University of Houston isolated yet another new chemical in mullaca which demonstrated remarkable toxicity against nasopharynx cancer cells, lung (adenocarcinoma) cancer cells as well as leukemia in mice. The same Taiwanese researchers had already published a separate study on mullaca’s other anti-leukemic phytochemicals in 1992, reporting that two physalin chemicals inhibited the growth of five types of acute leukemia, including lymphoid (T & B), promyelocytic, myeloid and monocytic.

Other researchers in China and Russia independently demonstrated significant immunomodulatory effects against blastogenesis (a process triggered in leukemia) while boosting other immune functions which might account for the anti-leukemic effects in mice seen by other researchers. With tumor cells, research suggests that several of the steroidal chemicals in mullaca act on an enzyme level to arrest the normal cell cycle in cancer cells as well as cause DNA damage inside of cancer cells (making them unable to replicate).

In addition to mullaca’s anticancerous and antileukemic actions, several research groups have confirmed mullaca’s antibacterial and antiviral activity. Most recently in 2002 and 2000, mullaca was shown to be active in vitro against several strains of mycobacteriums and mycoplasmas (both very stubborn types of bacteria which are not widely susceptible to standard antibiotics). In addition to these actions, mullaca has demonstrated effective antibacterial properties in vitro against numerous types of gram positive and gram negative bacteria, including Pseudomonas, Staphylococcus and Streptococcus. Other research groups in Japan have been focusing on mullaca’s antiviral actions and preliminary studies show that it is active in vitro against Polio virus I, Herpes simplex virus I, the measles virus, and HIV-I – demonstrating reverse transcriptase inhibitory effects.

Mullaca has also been reported to reduce spasms in guinea pigs, lower blood pressure in cats and to contract isotonic muscles in toads. In the test tube, mullaca was shown to have an anticoagulant effect. Western scientists did somewhat validate the indigenous use for diabetes when they reported a mild hypoglycemic effect in mice fed a water extract of the root. One must wonder what the results would have been if they had followed native customs and employed an alcohol extract instead.

Interestingly enough, much of the clinical research has ignored the local and indigenous uses of the plant; thus, many of its effective uses in herbal medicine remain unexplained. Its tested antibacterial properties could validate its use as a antiseptic and disinfectant for skin diseases and its use to treat gonorrhea. Its antiviral properties could well explain its long history of use for hepatitis, although scientists have not tested it specifically against hepatitis. Possibly the antispasmodic and muscle contractive properties documented for mullaca might explain its widespread use for asthma and female disorders as well. Yet its widespread use throughout the rainforests for malaria and fevers remains unexplained by science.

Herbal practitioners in both South and North America today rely on mullaca for various bacterial and viral infections as well as a complementary therapy for cancer and leukemia. Although not widely available here in the U.S., it is found as an ingredient in various herbal formulas and in bulk supplies. The animal studies conducted to date indicate no toxicity at any of the dosages used indicating that is a safe natural remedy.

Cautions: It may thin the blood and lower blood pressure

Traditional Preparation: Depending on what it is employed for, generally one-half to one cup of a whole herb infusion 1-3 times daily or 1-2 ml of a 4:1 tincture twice daily is used. Two to 4 grams of powdered whole herb (depending on body weight) in tablets or capsules or stirred into water or juice twice daily can be substituted if desired (since the active sterol chemicals are completely water soluble).

Contraindications: One animal study indicates this plant may lower blood pressure and one test tube study demonstrated a blood anticoagulant activity. People with blood disorders such as hemophilia, those taking heart medications or blood thinners, or those with other heart problems such as low blood pressure should not use this plant without supervision and advice of a qualified health care practitioner.

Drug Interactions: None reported; however, see above contraindications.

Anon. “Biological assay of antitumor agents from natural products.” Abstr.: Seminar on the Development of Drugs from Medicinal Plants Organized by the Department of Medical Science Department at Thai Farmer Bank, Bangkok, Thailand 1982; 129.

Ingredients: 100% pure mullaca (Physalis angulata) whole herb (root, leaf, stem and flowers). No binders, fillers or additives are used. This product is non-irradiated and non-fumigated. It is a wild harvested product—grown naturally in the Brazilian Amazon without any pesticides or fertilizers.

Suggested Use: This plant is best prepared as an infusion (tea): Use one teaspoon of powder for each cup of water. Pour boiling water over herb in cup and allow to steep 10 minutes. Strain tea (or allow settled powder to remain in the bottom of cup) and drink warm. It is traditionally taken in ½ to 1 cup dosages, 2-3 times daily. For more complete instructions on preparing herbal infusions see the Methods for Preparing Herbal Remedies Page.

Share and Enjoy:
Tagged with: and rheumatism. • for earache • for worms • Hepatitis • liver problems • Malaria • used as an anti-inflammatory and disinfectant for skin diseases