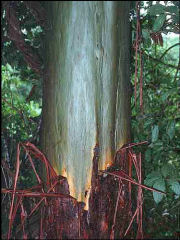 Mulateiro is a fascinating multi-purpose canopy tree in the Amazon. It grows tall and straight up to a height of about 30 meters, and has been long used as a source of good, high density lumber. It produces an abundance of small, white, aromatic flowers (from June to July) which are followed by elongated seed pods with 3-5 seeds inside. The tree propagates easily from the many seeds it produces. It can often be found near water as it can survive common periodic flooding in the region.

Mulateiro is noted for its ability to completely shed and regenerate its bark on a yearly basis, making harvesting the bark a totally renewable and sustainable enterprise. The bark is smooth (as if polished) and changes colors throughout the year as it matures – going from a green tone to a brownish tone. Calycophyllum is a small genus with only about 6 species spread through tropical America; all are medium-sized to large trees. This particular species is indigenous to the Amazon basin in Brazil, Peru, Bolivia and Ecuador. It is called mulateiro or pau-mulato in Brazil and it goes by name of capirona in Peru.

Mulateiro bark is deeply ingrained in the native culture – from being used as an admixture in the Ayahuasca rituals, to its many different uses in folkloric medicine. In the Amazon a poultice made from the bark is used topically in treating cuts, wounds and burns and believed to have antifungal and wound-healing qualities. The Indians also use a tea made from the bark on their bodies after bathing and then sun dry themselves. This forms a thin film covering their bodies believed to help fight the effects of aging, parasites and fungal infections. Indigenous people of the Amazon also use a bark decoction to treat diabetes. They boil 1 kg of bark in 10 liters of water until 4 liters remain. It is believed that if this decoction is drunk every day (about 5 ounces daily) for three consecutive months that it is a “cure” for diabetes. Peruvian tribes also apply the powdered bark to fungal infections of the skin. They also prepare a bark decoction to treat skin parasites – especially “sarna negra” – a nasty little bug that lives under the skin which is commonly found in the Amazon basin area.

In Peruvian herbal medicine today mulateiro is used for many purposes. A bark decoction is used topically for eye infections and infected wounds as well as for skin spots, skin depigmentation, wrinkles and scars. It also stops bleeding quickly and is often applied to bleeding cuts. Its also thought to soothe insect bites and reduce bruising and swelling. The bark is decocted and used internally for diabetes and disorders of the ovaries. The resin is used for abscesses, and skin tumors. Due to its beneficial effects to the skin, it is appearing as an ingredient in natural cosmetic products in Peru and Brazil.

Mulateiro bark contains a great deal of tannin chemicals which give it an astringent or drying effect. Recently the plant has been documented to contain a high content of phenols and organic acids which have demonstrated antibacterial, antifungal and insecticidal activity. The isolated phenols have demonstrated strong antioxidant activity, which may explain its traditional use to stop the aging process of the skin.

Only two studies have been published thus far on mulateiro. In 2001, researchers reported that it demonstrated strong antifungal activity in vitro against eleven common skin fungi and yeasts. In 2003, researchers reported the discovery of several new plant chemicals called seco-iridoids and reported that three of them were active against the tropical parasite, Trypansoma cruzi. With these studies, as well as the two groups of chemicals demonstrating antibacterial, antifungal, and insecticidal properties, scientists are just beginning to validate its traditional uses for various bacterial and fungal infections of the skin and as an insect repellent.

Mulateiro is better known today as a rainforest hardwood tree which is logged in the Amazon and exported around the world for high density, durable lumber and building materials, than as a medicinal plant. It has recently sparked the interest of scientists and formulators of natural body care products in South America for it beneficial effect to the skin. Even a branch of the Brazilian government is currently working with researchers and manufacturers about these new possible uses and markets for mulateiro bark in the body care products industry. With the tree shedding its bark annually, this resource would be highly sustainable. If a sufficient market were established for this renewable resource, then land owners would not cut them down for the value of the lumber and protect them for the income realized by annual harvesting of the bark. As a result of this work, mulateiro was been approved in the European Union as an ingredient employed in cosmetic products in February, 2006.

Traditional Preparation: For internal use, the standard remedy is ½ to 1 cup of standard decoction two to three times daily. This decoction is also a common topical remedy for skin problems, wounds, skin fungus, and overall skin health. It is applied directly to the affected area several times daily and allowed to dry before covering.

Ingredients: 100% pure mulateiro bark (Calycophyllum spruceanum). No binders, fillers or additives are used. This plant is non-irradiated and not fumigated, and has grown naturally in the Peruvian Amazon without pesticides or fertilizers.

Suggested Use:* This plant is best prepared as a decoction. Use one teaspoon of powder for each cup of water. Bring to a boil and gently boil in a covered pot for 20 minutes. Allow to cool and settle for 10 minutes and strain warm liquid into a cup (leaving the settled powder in the bottom of the pan). It is traditionally taken in 1/2 cup dosages 2-3 times daily. This decoction is also traditionally applied to the skin. For more complete instrutions on preparing herbal decoctions see the Methods for Preparing Herbal Remedies Page.

Share and Enjoy:
Tagged with: Antibacterial • Anticandidal • Antifungal • Antioxidant • as a skin aid for wrinkles scars freckles and age spots • fights free radicals • for Candida and yeast infections • for fungal infections of the skin athlete’s foot • for parasites • help to fight the effects of aging • Indigenous people of the Amazon also use a bark decoction to treat diabetes • Insect Repellant • Insecticidal • kills parasites • nail fungus