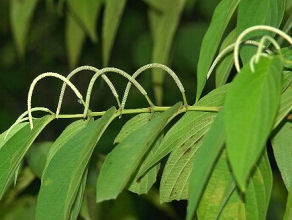 Matico belongs to the Piperaceae or pepper family. The Piper genus which includes more than 2,000 species of shrubs, trees and vines and includes two other well known plants— black pepper (Piper nigrum) and kava-kava (Piper methysticum).

Matico is a tropical, evergreen, shrubby tree that grows to the height of 6 to 7 m with lanceolate leaves that are 12 to 20 cm long. It is native to most all of tropical South America as well as Southern Mexico, the Caribbean, and much of tropical Latin America. Once cultivated as an ornamental worldwide, it has naturalized in tropical Asia, Polynesia, and Melanesia and can even be found in southern Florida, Hawaii, and Puerto Rico. In some countries matico is considered as an introduced noxious weed. The tree produces cord-like, white to pale yellow, inflorescence spikes that contain many minute flowers that are wind-pollinated and that soon develop into numerous tiny drupes with black seeds. The seeds are then scattered easily by bats and birds. From these many seeds, it can form large stands of quickly-growing shrubby trees that can choke out other native vegetation. Established plants also thicken into clumps or stands by suckers arising from the root crown.

Like many plants in the pepper family, most all parts of the Matico tree have a aromatic, spicy, peppery taste and smell. The fruits are often used as a condiment and pepper substitute. Throughout the Amazon, many of the Indian tribes use matico leaves as an antiseptic wound healer to stop bleeding, prevent infections and to speed healing. The leaves are either crushed or powdered and sprinkled directly onto the cut, wound, ulcer, and/or boil, or a tea (infusion) is made from the leaves and used as a wash. Sometimes the leaves are heated, pounded and then used as a poultice instead. The Shipibo-Conibo Indians also prepare the leaves in an infusion and use it to treat inflammation, diarrhea, gastritis, vomiting, fever, menstrual colic, internal infections and as a postpartum tonic.

In herbal medicine systems in South America, matico is quite well known and respected for wound healing as well a numerous other conditions. It is widely used as a remedy for all types of digestive disorders such as stomachaches, vomiting, dyspepsia, diarrhea, gastric ulcers, intestinal gas and even stomach cancer. It is also considered an excellent genitourinary tonic and used for kidney stones, urinary tract infections, cystitis, urethritis, leucorrhea, vaginitis, and various venereal diseases such as gonorrhea and trichomonas. In addition, it is also employed for various upper respiratory conditions such as bronchitis, pulmonary hemorrhages, pleurisy, pneumonia, colds and flu, and tonsilitis and sore throats.

The Spanish name, matico, comes from a South American legend. The plant was supposedly discovered by a wounded Spanish soldier named Matico. He learned (probably from the Indians) that applying the leaves to his wounds stopped them from bleeding, and it began to be called “matico” or “soldier’s herb or tree.” In was introduced into the profession of medicine in the United States and Europe by a Liverpool physician in 1839 as a styptic and astringent for wounds. Early medical texts in the U.S. include matico as it appeared in the United States Pharmacopoeia in the early nineteenth century. It was also recommended for leucorrhea, gonorrhea, hemorrhoids, blenorrhagia, dyspepsia, internal hemorrhages, (pulmonary, gastric ulcers, and postpartum bleeding) as well as diarrhea, dysentery, and cholera.

Matico contains many active chemicals including flavonoids, sequiterpenes, monoterpenes, heterocycles, phenylpropanoids, alkaloids, and benzenoids. A group of chemicals called chromenes have been found in the leaves (and its essential oil) which have evidenced toxic effects to cancer cells and bacteria. Other chemicals, including a group of bezenoid chemicals, have also demonstrated antibacterial and cytotoxic actions as well. Matico also contains a chemical called safrol which has been used successfully in powerful insecticides, fragrances, soaps and detergent products.

Matico has demonstrated broad spectrum antimicrobial actions which may help to explain its long history of use for various infections and infectious diseases. In various laboratory studies over the years, matico leaves and the essential oil from the leaves or fruits have demonstrated antibacterial actions against various gram-positive and gram-negative bacteria. It has also been reported with actions against fungi and yeast. In addition, researchers in France reported matico had antiviral actions against polio virus.

Other research has focused on matico being a possible treatment for a tropical disease called leishmaniasis that is quite prevalent in the Amazon and the South American tropics. Leishmaniasis is a parasitic disease spread by the bite of infected sand flies. There are several different forms of leishmaniasis. The most common forms are cutaneous leishmaniasis, which causes skin sores, and visceral leishmaniasis, which affects some of the internal organs of the body (for example, spleen, liver, bone marrow). In two studies, matico (and an extracted chalcone chemical from the plant) was reported to either kill the parasite or treat the disease in laboratory animals. Another rather nasty tropical disease of the tropics is schistosomiasis. This parasitic disease is carried and spread by fresh water snails found in the many rivers and streams of the Amazon basin. In several other studies matico was reported with molluscicidal actions against the snail and the parasite it carries. It also was reported with insecticidal actions against the mosquito that carries and spreads yellow fever.

While very little research has been conducted on matico specifically to validate its many traditional uses, its documented antibacterial and antiviral actions do support its use for various upper respiratory infections, urinary tract infections, sexually transmitted diseases, as well as an antiseptic and disinfectant for wounds. Despite any scientific validation, it still remains a main-stay in herbal medicine practices in South America for many types of digestive problems and it is quite well known and well respected for those types of conditions.

Most of the more than 1200 species of Piper are climbing shrubs or small woody trees occurring in the tropics and subtropics of both hemispheres. The constituents of the genus (Joshi, 1981; Calle, 1983) and specifically the alkaloids (Snieckus, 1971) have been reviewed. Extracts have been shown to have antifertility effects (Chandoke, 1978) and insecticidal activity (Su, 1981).

The Karijonas of the Rio Itilla consider the dried leaves an excellent styptic.”

USES: Roots externally applied for erysipelas, internally as a stimulant and cholagogue. Leaves used in the same way as the roots, and also as an astringent, for strengthening the womb to prevent uterine prolapse. Leaves once recommended against cholera.

CHEM.: Phenylpropanoid and benzoic acid derivatives have been described from the leaves (Ref: PIPE 3).

Ingredients: 100% pure matico leaves (Piper aduncum). No binders, fillers or additives are used. This plant is non-irradiated and not fumigated, and has grown naturally in the Amazon without pesticides or fertilizers.

Suggested Use:* This plant is best prepared as an infusion (tea): Use one teaspoon of powder for each cup of water. Pour boiling water over herb in cup and allow to steep 10 minutes. Strain tea (or allow settled powder to remain in the bottom of cup) and drink warm. It is traditionally taken in 1 cup dosages, 2-3 times daily. For more complete instrutions on preparing herbal infusions see the Methods for Preparing Herbal Remedies Page.

Share and Enjoy:
Tagged with: also employed for various upper respiratory conditions such as bronchitis • an excellent genitourinary tonic and used for kidney stones • colds and flu • Cystitis • It is widely used as a remedy for all types of digestive disorders such as stomachaches vomiting dyspepsia diarrhea gastric ulcers intestinal gas and even stomach cancer • leucorrhea • pleurisy • Pneumonia • pulmonary hemorrhages • tonsilitis and sore throats • Urethritis • Urinary tract Infections • Vaginitis • various venereal diseases such as gonorrhea and trichomonas