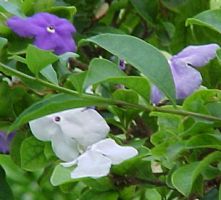 Manacá is a medium-sized, shrubby tree that grows to 8 m in height. It is often cultivated as an ornamental tree in the tropics as it produces highly-fragrant, pretty, white and purple flowers (which are sometimes employed in perfumes). It can be found in the Amazon regions of Brazil, Bolivia, Peru, Ecuador, Colombia, and Venezuela. In Brazil, manacá is known by several botanical names, including Brunfelsia uniflora, B. hopeana, and Franciscea uniflora. In Europe the plant is known and sold in herbal commerce as Brunfelsia hopeana. All refer to the same plant. Other plant relatives from Colombia and Ecuador include Brunfelsia chiricaspi (from its local name, chiricaspi, which means “tree of chills”), and Brunfelsia grandiflora both of which are used by rainforest Indians as hallucinogens. However, due to the toxicity and unpleasant side effects, use of these plants appears to be on the wane. They are different plants than manacá – but sometimes are confused with manacá for their similar look, growth, and habit.

Manacá has a long history of indigenous use for both medicine and magic. Its Brazilian common name, manacá, originated with the Tupi Indians in Brazil; they named it after the most beautiful girl in their tribe, Manacán, for its lovely flowers. It is a sacred and spiritual plant used by shamans and curanderos in the potion ayahuasca (a sacred hallucinogen), in special initiation ceremonies, and for bad luck (the chiricaspi and grandiflora species are preferred for ayahuasca brews).

In the Amazon, manacá root is prepared into a tincture with aguardiente (rum) for rheumatism and venereal disease. In Peru (where the local name of the plant is chiricsanango), indigenous peoples apply a decoction of leaves externally for arthritis and rheumatism; they also employ a root decoction for chills. One Amazonian curandero (near Pucallpa, Peru) uses a root tea for adult fevers, arthritis and rheumatism, back pain, common colds, bronchitis, lung disease and tuberculosis, snakebite, and as an enema for kidney disorders and ulcers. Indigenous tribes in the northwest Amazon utilize manacá to increase urination and perspiration in detoxification rituals. They also use it for fever, rheumatism, snakebite, syphilis, and yellow fever. Curanderos and herbal healers along the Amazon River in Ecuador use a root decoction to treat arthritis, rheumatism, colds and flu, uterine pain and cramps, venereal diseases, and to purify the blood – while using a poultice of the leaves as a topical pain-reliever.

In South American herbal medicine, the root of manacá is said to stimulate the lymphatic system. It has long been used for syphilis, earning the name vegetable mercury (mercury was once used to treat syphilis many years ago). In South American medicine systems today, manacá is considered to be an abortive, a lymph and blood cleanser, a topical anesthetic, diuretic, menstrual promoter, laxative, sweat promoter, and narcotic. It is employed for arthritis, rheumatism, scrofula, and syphilis. In Brazil herbalists use the root as a laxative and blood cleanser, for syphilis, rheumatism, scrofula, dermatosis, and to promote menstrual flow. Practitioners and herbalists in the United States use manacá as a diuretic, laxative, and anti-inflammatory to treat arthritis and rheumatism, sexually-transmitted diseases, and to stimulate the lymphatic system and disperse uric acid. In Europe the plant is used for arthritis, rheumatism, bronchitis, fevers, and snakebite.

A 1996 phytochemical study on the aerial parts of manacá revealed it contained such active compounds as benzenoids, terpenes, alkaloids, lactones, and lipids. It is the root, though, that has been used primarily by indigenous peoples throughout the Amazon and by herbalists throughout the world. The root of manacá contains coumarins, alkaloids, lignans and sapogenins. Active constituents include two alkaloids, manaceine and manacine, as well as scopoletin and aesculetin (types of coumarin chemicals). Manaceine and manacine are thought to be responsible for stimulating the lymphatic system, while aesculetin has demonstrated pain-relieving, liver detoxification, and anti-inflammatory activities in laboratory tests. Scopoletin is a well-known phytochemical that has demonstrated analgesic, anti-inflammatory, antibacterial, antitumor, cancer-preventive, antifungal, and antispasmodic activity in many different laboratory experiments. It occurs in significant amounts in manacá. A U.S. patent was awarded in 2002 for scopoletin’s ability to inhibit nitric oxide production. Nitric oxide is a reactive radical produced in the body and involved in inflammatory processes and in diseases such as asthma, heart disease, and erectile dysfunction. These chemicals and their reported biological activities could help to explain many of manacá’s uses in traditional herbal medicine systems.

Much more research is published on various chemicals found in manacá, rather than the plant itself. However, several animal studies do confirm some of its traditional uses – especially for pain and inflammation. In a 1991 clinical study with mice, manacá demonstrated pain-relieving and anti-inflammatory effects. An earlier (1977) study reported that manacá root extracts evidenced marked anti-inflammatory actions in rats – as well as central nervous system depressant and fever-reducing actions. Other root extracts administered to rats showed anti-inflammatory actions. Leaf and root extracts of manacá also showed insecticidal actions (which may be attributed to naturally-occurring insecticidal chemicals nerolidol and farnesol). Extracts of the twigs also have been documented to prevent cellular mutations.

In South America manacá is respected as an important sacred and medicinal plant – mainly employed by shamans, healers, curanderos, herbal practitioners, and professionals. Due to its sedative effects and toxicity in large dosages, inexperienced non-professionals should refrain from self-treating or freely consuming this plant as a natural remedy; there are some contraindications and drug interactions which should be considered. This plant is best left in the hands of trained professionals (who can obtain the right species from reliable sources), taken only in very small amounts and/or in proper combination with other plants.

Cautions: Use with caution in combination with MAO inhibitors, sedatives, and blood thinners. Avoid if allergic to aspirin/salicylates. Do not exceed recommended dosages.

Manacá has a traditional use as an abortive. No clinical studies have been performed to indicate its safety during pregnancy; therefore, it is contraindicated for pregnant women.

Manacá root contains coumarins – plant chemicals known to thin the blood. Those taking blood-thinning medications such as coumadin should use manacá only under the direction and supervision of a qualified healthcare practitioner to monitor these effects.

Drug Interactions: None reported; however, manacá may potentiate blood-thinning medications such as Warfarin® and heparin. It may potentiate monoamine oxidase inhibitor drugs also.

1. “Manaca has anti-rheumatic and diuretic properties and is also used as a purgative (causing bowel evacuation). It has been used to treat syphilis, snakebites, and Yellow Fever.”

2. “Manaca has one of the most beautiful flowers in the Amazon rainforest. The root is said to stimulate the lymphatic system. In folk remedies it has been used for arthritis, rheumatism, scrofula, and syphilis. Some extracts show marked anti-inflammatory tendencies.”

20. “This woody shrub is a multipurpose plant found only in the wild. It is employed as an addition to the yaje’ drink, and in a wide spectrum of therapeutic uses ranging from the treatment of yellow fever to snake bite; like other species, it is valued highly as a febrifuge because of the sensation of chills that follow ingestion. The Siona-Secoyas of Ecuador employ it as an abortifacient.”

“Brunfelsia grandiflora is wide-ranging and polymorphic, occuring in western South America from Venezuela south to Boliva… Since this subspecies is widely cultivated for medicinal and ornamental purposes, some activity of man has undoubtedly influenced its present distribution. The principal use of this subspecies is as an additive to the hallucinogenic caapi drink. For this purpose, pieces of the root are preferred, but the leaves may also be employed. It is currently under investigation for possible cardiovascular activity.”

“Brunfeslia is known to play a part in shamanistic practises… Shamans consider B. grandiflora a spritual guide (T. Plowman 1977).”

The 40 species of Brunfelsia are woody shrubs or small trees native to tropical South America and the West Indies. Several species are cultivated as ornamentals in warm regions.

Species of Brunfelsia are rich in scopoletin, a furocoumarin which is claimed to be antiinflammatory (Iyer, 1977). An alkaloid, hopeanine, has been described from B. hopeana (Gellert, 1978) and its pharmacology has been reported (Iyer, 1978). The chemistry and medicinal uses of the genus have been reviewed. (Plowman, 1977).

The type collection of Brunfelsia grandiflora subsp. schultesii -SRS 24108-is very positively alkaloidal. The subspecies is widely cultivated (in Bolivia, Peru and Colombia, Brazil, Ecuador and Venezuela), whereas B. grandiflora itself is still found wild. Both are employed as additives to the ayahuasca hallucinogen, and both have a broad therapeutic spectrum ranging from the treatment of yellow fever to snake bite. The most effective parts of the plants are considered to be the roots. The most widely employed medicinal uses are those to treat syphilis and rheumatism and for their diuretic and diaphoretic properties. Both are highly regarded as agents to treat fevers because of the curious sensation of chills which they produce. Brunfelsia grandiflora has been employed as an ichthyotoxic plant; both are toxic to cattle, and subsp. schultesii has been the source of problems to owners of cattle in the Trapecio Amazonico of Colombia. The Kofans and the Siona-Secoyas of Ecuador utilize this species as a hallucinogen, the latter group using it also as an abortifacient.

Ingredients: 100% pure manacá bark (Brunfelsia uniflora). No binders, fillers or additives are used. It is a wild harvested product—grown naturally in the Brazilian Amazon without any pesticides or fertilizers.

Suggested Use: This plant is best prepared as a decoction. Use one teaspoon of powder for each cup of water. Bring to a boil and gently boil in a covered pot for 20 minutes. Allow to cool and settle for 10 minutes and strain warm liquid into a cup (leaving the settled powder in the bottom of the pan). It is traditionally taken in 1/2 cup amounts twice daily. For more complete instructions on preparing herbal decoctions, see the Methods for Preparing Herbal Remedies Page.

Not to be taken while pregnant or breast-feeding.

Avoid dosages higher than the suggested use indicates.

Those allergic to aspirin (acetylsalicylic acid) should avoid using manacá. Manacá contains salicylate and several of its derivatives.

Manacá root contains coumarins – plant chemicals known to thin the blood. Those taking blood-thinning medications such as coumadin should use manacá only under the direction and supervision of a qualified healthcare practitioner to monitor these effects.

Drug Interactions: None reported; however, manacá may enhance the effect blood-thinning medications such as Warfarin® and heparin.

Share and Enjoy:
Tagged with: also used for yellow fever. • and as an enema for kidney disorders and ulcers • arthritis and rheumatism • Back Pain • Bronchitis • common colds • for adult fevers • lung disease and tuberculosis • Rheumatism • snakebite • Syphilis • to increase urination and perspiration in detoxification rituals • use it for fever