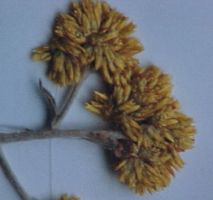 Macela is a medium-sized aromatic annual herb that grows up to 1-1/2 m high. It produces small white flowers with yellow centers and serrated green leaves. It is indigenous to much of tropical South America including Argentina, Bolivia, Brazil, Colombia, Ecuador, Guyana, Paraguay, Peru, Uruguay, and Venezuela. It often springs up on disturbed soils and some consider it a weed.

In Brazil, the plant is called macela or marcela and it has been used in herbal medicine for many years. Using the entire plant or just its flowers, a tea is prepared with 5 g of dried herb to 1 liter of boiling water. This infusion is used as a natural remedy for nervous colic, epilepsy, nausea, and gastric problems. It is also employed as an anti-inflammatory, antispasmodic, menstrual promoter, sedative, and analgesic for gastric disturbances, liver problems, diarrhea, and dysentery. This same infusion (or a slightly stronger one) is used externally for rheumatism, neuralgia, sore muscles, and even menstrual pain. The flowers are crushed and added to pillows as a natural sleeping aid (much in the same manner as the American hops flower). In Argentina, 20 g of fresh flowers are infused in 1 liter of hot water and taken to help regulate menstruation and for asthma; the aerial parts or entire plant is decocted as an aid for digestion and diabetes. In Uruguay it is used much the same way – for stomach, digestion, and gastrointestinal disorders, as a menstrual regulator, and as a sedative and antispasmodic. In Venezuela, the entire plant is infused or decocted and taken internally to treat diabetes, as a menstrual promoter, and to help overcome impotency. In Peru, the leaves are made into a tea for a cough suppressant to treat bronchitis; an infusion of the entire plant is used to treat diabetes (Type II).

Phytochemical analysis of macela, which began in the mid-1980s, shows that it is a rich source of flavonoids – including novel ones never seen before. Many of its active properties are attributed to these flavonoids as well as to other chemicals (called terpenes) isolated in the plant.

Macela has been the subject of western research and many of its long-time uses in herbal medicine have been validated by scientists. In animal studies with mice and rats, macela demonstrated pain-relieving, anti-inflammatory, and smooth-muscle (gastrointestinal) relaxant properties internally without toxicity, in addition to anti-inflammatory and pain-relief actions externally. This may explain why macela has long been used effectively for many types of pain, gastrointestinal difficulties, menstrual cramps, and asthma. In vitro studies have demonstrated that macela is molluscicidal (in a test used to ascertain its effectiveness against the tropical disease schistosomiasis), and active against Salmonella, E. coli, and Staphylococcus. This could explain its long history of use for dysentery, diarrhea, and infections. It also has shown to be a strong antioxidant, to increases the flow of bile from the gallbladder, to help protect against liver damage and to lower liver enzymes levels. Again, this certainly supports its traditional uses for liver and gallbladder problems of various kinds.

Some of the in vitro antioxidant testing performed suggested that macela interfered in the degenerative processes of arteriosclerosis (it reduced blood stickiness, blood fats, and blood oxidation). Macela has been used traditionally for diabetes throughout the tropics where it grows. Not until 2002 did researchers validate this use: a water extract of the entire plant exhibited blood sugar-lowering activity in a mouse model of Type 2 diabetes. This hypoglycemic action was attributed to a novel plant chemical found in macela called achyrofuran.

Other research on macela has concentrated on its antitumorous, antiviral, and immunostimulant properties. It passed the initial screening test used to predict antitumor activity in the mid-1990s by two separate research groups. In subsequent research, macela was reported to inhibit cancer cell growth in vitro, and another research group showed that an extract of macela flowers inhibited the growth of cancer cells by 67% in vitro. Most recently (in 2002), researchers in Argentina studying macela reported a toxic effect against a human liver cancer cell line. In the mid-1980s, German researchers extracted the whole dried plant and demonstrated that, in both humans and mice, it showed strong immunostimulant activity (by increasing phagocytosis and immune cell activity). In 1996, researchers in Texas demonstrated its in vitro antiviral properties against HIV, and Argentinean researchers found it to be active against Pseudorabies (a type of animal herpes virus).

Toxicity studies indicate no toxicity in animals given macela orally or even when water or ethanol extracts of the plant were injected into mice. They did report, however, that a hot water extract potentiated the effects of barbiturates when injected (at a dose of 200 mg/kg).

With so many active biological properties documented thus far, macela should continue to be the subject of further research. Regardless, a simple macela tea (standard infusion) is still a highly effective natural remedy for many types of gastrointestinal complaints – especially where inflammation and spasms occur. Many practitioners in South and North America use macela for spastic colon, Crohn’s disease, colitis, irritable bowel syndrome, and as a general digestive aid. In South America it is still widely used to help regulate menstrual cycles. Although this has been done for many years with reported good results, this effect has not been studied by scientists.

Cautions: It has a sedative effect and might increase the effects of other sedatives. People with diabetes should use with caution as it has a mild hypoglycemic effect

Traditional Preparation: The therapeutic dosage is reported to be 1-2 g two or three times daily of dried whole herb and/or flowers. One cup of a whole herb infusion 2-3 times daily or 2-3 ml of a 4:1 tincture twice daily can be used. See Traditional Herbal Remedies Preparation Methods page if necessary for definitions.

This plant has been documented with hypoglycemic effects; people with hypoglycemia and/or diabetes should only use this plant under the care and direction of a qualified health care practitioner who can monitor blood glucose levels.

This plant has a long history of use as a menstrual promoter and regulator and its biological effects during pregnancy have not been studied or reported. While these traditional uses have not been clinically validated, pregnant women should still refrain from using this plant.

One study demonstrated barbiturate potentiation activity when a hot water extract of macela was injected in mice; it remains unclear if this effect is evident when taken orally. In herbal medicine systems, the plant is used as a sedative. Natural herb capsules, teas or tinctures might potentiate the effects of other sedatives and barbiturates. Use with caution when taking other prescription sedatives and pain-killers.

Ingredients: 100% pure macela leaves (Achyrocline satureoides). No binders, fillers or additives are used. This plant is non-irradiated and not fumigated, and has grown naturally in the Amazon without pesticides or fertilizers.

Suggested Use:* This plant is best prepared as an infusion (tea): Use one teaspoon of powder for each cup of water. Pour boiling water over herb in cup and allow to steep 10 minutes. Strain tea (or allow settled powder to remain in the bottom of cup) and drink warm. It is traditionally taken in 1 cup dosages, 2-3 times daily. For more complete instrutions on preparing herbal infusions see the Methods for Preparing Herbal Remedies Page.

Contraindications: Not to be used during pregnancy or while breast feeding.

One study demonstrated barbiturate potentiation activity when a hot water extract of macela was injected in mice; it remains unclear if this effect is evident when taken orally. In herbal medicine systems, the plant is used as a sedative. Therefore this plant might enhance or increase the action of sedatives and barbiturates. Use with caution when taking other prescription sedatives and pain-killers.

A chemical in this plant has been documented with hypoglycemic effects in animal studies. People with hypoglycemia and/or diabetes should use with caution while monitoring blood glucose levels for this possible effect.