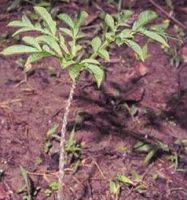 JERGON SACHA OUT OF STOCK

Jergón sacha is a rainforest understory plant that consists of a single, giant, deeply-divided leaf borne from an underground tuber on a long, thick stem which resembles the trunk of a sapling. When fertile, the flower stem emerges from near the base of the plant and rises up to 1–2 m in height. At the end is a large, maroon spathe (a single, petal-like sheath) with bright red-orange, berry-like seeds crowded on a fleshy stalk inside. This bloom resembles that of a caladium or dieffenbachia plant—only much larger. While it is considered a herbaceous perennial, it’s quite large for an herb—2–4 m tall! Thirteen species of Dracontium grow in the South and Latin American tropics. Four of these Amazonian species look almost identical and are used interchangeably in tropical herbal medicine systems: Dracontiumlongipes, D. loretense, D. peruviuanum, and D. asperum. While all four species are indigenous to the Amazon, D.asperum is more prevalent in the rainforests of Brazil, Suriname, and Guyana; longipes, loretense, and peruviuanum are more prevalent in the Peruvian, Colombian, and Ecuadorian rainforests.

Ethnobotanically, jergón sacha is considered a “signature plant”: the plant’s indigenous uses are directly related to its appearance. In this particular case, the trunk-like stem and its mottled coloring closely resembles a poisonous snake indigenous to the areas in which it grows. In Peru and Ecuador, the name of both snake and plant is jergón sacha and/or fer-de-lance. In Brazil the snake is named jararaca; the plant, erva-jararaca (jararaca herb). These common names refer to the highly poisonous Bothrops genus of snakes, several species of which are indigenous to the Amazon (including the common Bothrops jararaca, for which the plant is named).

Local villagers as well as Indian tribes throughout the Amazon rainforest use the large tuber or rhizome of the jergón sacha plant as an antidote for the bite of these snakes. In such a case, the tuber is chopped up quickly, immersed in cold water, and drunk. More tuber is chopped finely and placed in a large banana leaf, which is then wrapped around the bite area. This poultice is changed every hour or two; more of the tuber is eaten every 3-4 hours. The efficacy of this remedy is reputed to be quite high if employed immediately (up to an hour) after being bitten. In remote areas of the Amazon where no means exist to preserve snake antivenin that requires refrigeration (its exorbitant cost notwithstanding), this generations-old remedy has been developed out of necessity. Indian tribes in Guyana also employ it as an antidote for stingray wounds, spider bites, and for poison dart and arrow wounds (where the poison, called curare, is prepared with poisonous plant and animal parts, including snake and/or frog venom). Other Indian cultures believe that beating the legs and feet with the leaves and/or stems of jergón sacha will prevent snakes from biting them.

Jergón sacha made its way out of the jungle and into herbal medicine systems of South America for other purposes. In addition to snakebite, the powdered tuberous rhizome is taken internally for asthma, menstrual disorders, chlorosis, and whooping cough in Brazilian herbal medicine. The root powder is used topically for scabies and the juice of the fresh rhizome is applied externally to treat sores caused by blowflies (and put directly on the site of a snakebite). The whole plant is also decocted and put in baths for gout. Jergón sacha is also well known in current Peruvian herbal medicine systems; tablets, capsules, and tinctures of the rhizome can be found in many natural pharmacies and stores. It is touted there as a natural remedy for HIV/AIDS, cancerous tumors, gastrointestinal problems, hernias (as a decoction applied topically), hand tremors, heart palpitations, and to enhance immune function.

The use of jergón sacha for AIDS and HIV in Peru was fueled by several newspaper articles published in Peruvian newspapers and magazines beginning in the early 1990s. The subject of the articles was a Peruvian physician, Dr. Roberto Inchuastegui Gonzales, who was president of the Committee of AIDS and Transmissible Diseases at the Peruvian Institute of Social Security in Iquitos, Peru. The media reported that, in experiments with AIDS patients conducted from 1989 to 1993, the doctor administered two plant extracts with remarkable results. One was a rhizome extract of jergón sacha (D. peruviuanum) as an antiviral, and the other was an extract of two cat’s claw vines (Uncaria tomentosa and U. guianensis, which are also featured in this book) as immunostimulants. Dr. Inchuastegui reported that a majority of HIV patients treated had tested negative for the HIV virus and returned to normal lives after taking these two plant extracts for an average of six months. He has yet to publish any clinical trials. His work in Iquitos with AIDS patients has surfaced periodically in news and media reports over the last decade which continues to purport the use of jergón sacha for HIV and other viruses. This has fueled the market in Peru for the sale of jergón sacha and, in the late 1990s, news of his work was disseminated in Eastern Europe.

Thousands of kilos of jergón sacha rhizome have been exported annually to Poland, Russia, and other countries since. This type of large scale sales necessitated cultivation methods to be developed for the plant. Since the entire rhizome is harvested (which destroys the plant), it isn’t sustainable for wild harvesting in the rainforest. In the last five years, two Peruvian universities have developed sound cultivation methods for replanting jergón sacha into the rainforest as it is harvested. New venues – old coca plantations and previously deforested lands – were developed for its new market as a cash crop for local farmers in organic cultivation programs.

Initial phytochemical screening indicates that the rhizome contains alkaloids, flavonoids, phenols, saponins, sterols, triterpenes, and starch; yet, none of these have been quantified or identified.

Despite the large and growing market for jergón sacha, not a single clinical study has been published on its actions. If jergón sacha’s longstanding use as an effective snakebite remedy was clinically validated, it may explain its more recent use as an antiviral for HIV as well. The most recent class of drugs developed for HIV are called protease inhibitors. Protease inhibitors work by blocking an active component in HIV-its protease enzyme. With the protease enzyme blocked, HIV makes copies of its virus that are defective and can’t infect new cells. In current (mainstream) HIV therapy, protease inhibitor drugs are usually combined with other antiviral drugs (which kill the virus directly) after the protease inhibitors have disabled its replication. Proteases are ubiquitously present in every cell of every living organism: they are enzymes that digest proteins.

It is well known that proteases are also main ingredients in snake venom. Typically the snakebite site is a necrotic area – the skin sloughs off due to action by proteases in the venom, which first turn the area bruised and swollen before digesting skin and tissue. The stronger the protease in the venom and its quantity relate directly to how much skin and tissue damage results at the site of the bite. For this reason, many herbal remedies that have been validated as snakebite remedies (especially those employed at the site of the bite) have been shown to be natural protease inhibitors also. In fact, many pharmaceutical company researchers bio-prospecting for new chemicals and drugs in the Amazon are very interested in those plants the Indians employ as snakebite remedies for just this reason. It may be possible that Dr. Inchuastegui stumbled across one of these natural protease inhibitors in his work with HIV patients and jergón sacha. Clinical research is still required however, to verify the mechanisms of action in jergón sacha against viruses and against snakebite and, particularly, if they are one and the same.

Jergón sacha is one of the more unusual and interesting rainforest remedies coming from the Amazon today. Its “signature plant” status as a snakebite remedy is well known in South America and highly regarded. Without proper research to validate its traditional ethnomedical uses, however, it may take time for it to be a popular herbal remedy in North America. It is hoped that, with increasing sales in Peru and Eastern Europe for jergón sacha, someone will answer the call to perform this much-needed research – especially as it has application for treating such deadly viruses as HIV.

Traditional Remedy: In Peruvian herbal medicine, 2-3 g of the dry powdered rhizome is taken 2-3 times daily, or 3-5 ml of a rhizome tincture twice daily is recommended.

10. “Dracontium loretense Krause. Araceae. “Hierba del jergon”, “Jergón sacha”, “Fer-de-lance”. Tuber believed to help snakebites perhaps on account of the snakeskin like mottling of the petiole. Some people whip their feet and legs with the branches to repel snakes. The corms are used to control and steady the hands. The roots are reported to be edible (DAT).”

“Another herb that has gained popularity more recently, is Sacha jergon. An Indian friend of Alan’s who was familiar with it’s use, posed for our cameras holding Uña de gato in one hand and Sacha jergon in the other. Sacha jergon is another powerful botanical that has traditionally been used with other herbs to treat cancer. There is also some anecdotal evidence, that a combination of Uña de gato with Sacha jergon can be used in the treatment of AIDS. One doctor in Iquitos, Dr. Roberto Inchaustegui, has reported some preliminary success in reversing the various viral and bacterial infections associated with full blown AIDS in some of his patients using the two herbs together.”

Ingredients: 100% pure jergon sacha root/rhizome (Dracontium loretense). No binders, fillers or additives are used. It is organically grown product—grown naturally in the Peruvian Amazon without any pesticides or fertilizers.

Suggested Use: Take one teaspoon 1-3 times daily or as directed by a health care professional. This powder can be stirred into water, juice, or smoothies—heating or cooking is not required. It can be stuffed into capsules, or combined with other herbs or foods. For longer term storage, it can be prepared as a tincture.