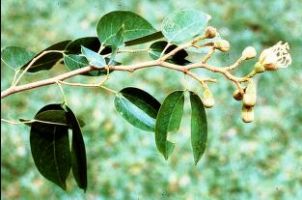 Jatobá is a huge canopy tree, growing to 30 m in height, and is indigenous to the Amazon rainforest and parts of tropical Central America. It produces bright green leaves in matched pairs, white, fragrant flowers that are pollinated by bats, and an oblong, brown, pod-like fruit with large seeds inside. The fruit is considered edible although hardly tasty; one of its common names, “stinking toe,” is used to describe the smell and taste of the fruit! In the Peruvian Amazon the tree is called azucar huayo and, in Brazil, jatobá. The Hymenaea genus comprises two dozen species of tall trees distributed in tropical parts of South America, Mexico, and Cuba.

Several species of Hymenaea, including jatobá, produce usable copal resins. At the base of the jatobá tree an orange, sticky, resinous gum collects, usually underground (however, the bark also produces smaller amounts of resin when wounded). The resin of Hymenaea trees converts to amber through a remarkable chemical process requiring millions of years. During this process, volatile plant chemicals leach out of the resin and other non-volatile chemicals bond together. This forms a hard polymer that is resistant to natural decay processes and the ravages of time. As portrayed in the Jurassic Park movies, amber of million-year-old Hymenaea trees have provided scientists with many clues to its prehistoric presence on earth as well as to the insects and other plants encased in it.

In the Amazon, jatobá’s aromatic copal resin is dug up from the base of the tree and burned as incense, used in the manufacture of varnishes, used as a glaze for pottery, and is employed medicinally. Indians in the Amazon have long used the resin in magic rituals, love potions and in wedding ceremonies. Although the name Hymenaea is derived from Hymen, the Greek God of marriage, it refers to the green leaflets that always occur in matching pairs, rather than the Indian’s use of it in marriage ceremonies. Jatobá’s bark and leaves also have an ancient history of use with the indigenous tribes of the rainforest. The bark of the tree is macerated by the Karaja Indians in Peru and Creole people in Guyana to treat diarrhea. In Ka’apor ethnobotany, jatobá bark is taken orally to stop excessive menstrual discharge, applied to wounded or sore eyes, and used to expel intestinal worms and parasites. The bark is used in the Peruvian Amazon for cystitis, hepatitis, prostatitis, and coughs. In the Brazilian Amazon, the resin is used for coughs and bronchitis, and a bark tea is used for stomach problems as well as foot and nail fungus.

With its long history of indigenous use, it would follow that jatobá has a long history of use in herbal medicine systems throughout South America. It was first recorded in Brazilian herbal medicine in 1930. The bark was described by Dr. J. Monteiro Silva who recommended it for diarrhea, dysentery, general fatigue, intestinal gas, dyspepsia, hematuria, bladder problems, and hemoptysis (coughing blood from the lungs). The resin was recommended for all types of upper respiratory and cardiopulmonary problems. In the mid-1960s an alcohol bark extract called Vinho de Jatobá was widely sold throughout Brazil as a tonic and fortificant, for energy, and for numerous other disorders.

In traditional medicine in Panama, the fruit is used to treat mouth ulcers and the leaves and wood are used for diabetes. In the United States, jatobá is used as a natural energy tonic, for such respiratory ailments as asthma, laryngitis, and bronchitis, as a douche for yeast infections and it is taken internally as a decongestant and for systemic candida in the stomach and intestines. It is also used in the treatment of hemorrhages, bursitis, bladder infections, arthritis, prostatitis, yeast and fungal infections, cystitis, and is applied topically for skin and nail fungus. At present, none of the research has indicated that jatobá has any toxicity. One study highlighted the mild allergic effect that jatobá resin may have when used externally.

Chemical analysis of jatobá shows that it is rich in biologically active compounds including diterpenes, sesquiterpenes, flavonoids, and oligosaccharides. The phytochemical makeup of jatobá is very similar to another resin-producing rainforest tree, copaiba, which is also featured in this book. Some of these same chemicals occuring in both plants (such as copalic acid, delta-cadinene, caryophyllene and alpha-humulene) have shown to exhibit significant anti-inflammatory, antibacterial, antifungal and antitumor activities in clinical studies. In other research, another of jatobá’s phytochemicals, astilbin, was shown in a 1997 clinical study to provide antioxidant and liver protective properties.

Jatobá also contains terpene and phenolic chemicals which are responsible for protecting the tree from fungi in the rainforest. In fact, the jatobá tree is one of the few trees in the rainforest that sports a completely clean trunk bark, without any of the usual mold and fungus found on many other trees in this wet and humid environment. These antifungal terpenes and phenolics have been documented in several studies over the years and the antifungal activity of jatobá is attributed to these chemicals.

In addition to its antifungal properties, jatobá also has been documented to have anti-yeast activity against a wide range of organisms including Candida. Other clinical studies have been performed on jatobá since the early 1970s which have shown that it has antimicrobial, molluscicidal (kills/controls snails & slugs), and antibacterial activities, including in vitro actions against such organisms as E. coli, Psuedomonas, Staphylococcus and Bacillus. In addition, a water extract of jatobá leaves has demonstrated significant hypoglycemic activity, producing a significant reduction in blood sugar levels (which validates another traditional use).

Practitioners have long reported that jatobá bark has shown dramatic results with acute and chronic cystitis and prostatitis. Many practitioners today are discovering that these chronic conditions oftentimes can be fungal in nature rather than bacterial. The widespread use of antibiotics to treat these conditions can actually kill off friendly bacteria which live off fungi – and increase the chances of a fungal problem or encourage fungal growth – even to the point of making the condition chronic. When these types of chronic prostatitis and cystitis cases react so quickly and dramatically to jatobá supplements, is it probably from jatobá’s antifungal and anti-yeast properties at work, not its antibacterial properties.

Natural health practitioners in the United States are learning of jatobá’s many uses and employing it as a natural remedy for prostatitis and cystitis, as a healthful tonic for added energy (without any caffeine or harmful stimulants), and for many fungal and yeast problems such as candida, athlete’s foot, yeast infections and stubborn nail fungus. It is a wonderful, helpful natural remedy from an important and ancient rainforest resource.

Cautions: It has a natural stimulant effect; take before 6 PM to avoid insomnia

Traditional Preparation: One-half to one cup bark decoction 1-3 times daily or 1-3 ml of a 4:1 tincture is taken twice daily. A strong bark decoction or standard tincture diluted with water and a small amount of cider vinegar is used topically for skin or nail fungi or employed as a douche for yeast infections.

Contraindications: Jatobá leaves have been documented to have a hypoglycemic effect and, as such, should be used under practitioner supervision by diabetics.

1. “This tonic and energizer is used by lumberjacks in the Brazilian Rainforests to help them feel strong and vigorous, keep a good appetite, and stay productive. The tea is effective in respiratory ailments such as chronic cough, asthma, lung weakness, laryngitis, and bronchitis. It works well as a decongestant and has anti-fungal properties. Other uses of Jatoba include the treatment of hemorrhage, bursitis, bladder infections, yeast and fungal infections, cystitis, arthritis, and prostatitis.”2. “Jatoba helps to decongest the urinary tract and can be excellent for cystitis, and bladder and prostate infections. It has been used as a system energizer, fortifier and decongestant. It has been used for treating respiratory problems.”

3. “ACTIONS: Decongests urinary tract, Enhances treatment of cystitis and prostatitis, Anti-inflammatory to bladder, System fortifier. TRADITIONAL USE: Jatoba is highly regarded as a natural energy tonic. Besides being an energizer and tonic, Jatoba is used for cystitis, prostatitis and diseases of the bladder. It has been used for treating respiratory problems. It is a decongestant and fortifier for the system. MERIDIAN INDICATIONS: Reduces damp heat in Lower Burner, Disperses blood stagnation, Reduces inflammation, Clears toxic pus, Painful urination / dribbling, Pain in testicles or prostate EAV POINTS: Bladder, Bladder 65, Triple Warmer. CAUTION: If condition persists, or in case of pain or high fever, consult your health care practitioner.”

8. “Brazilian uses and Folklore: Jatoba tea is a natural tonic for the organism. According to Dr. J. Monteiro Silva, whoever drinks Jatoba tea feels”. . . strong and .vigorous, with a good appetite, always ready to work”. Lumberjacks who work in the forests of Brazil generally take a jar of Jatoba tea or extract with them to drink during the day: it gives them energy. Besides being an energizer and tonic, Jatoba has also given very good results in cases of acute and chronic cystitis and prostatitis. When mixed with a little honey it is influential in treating respiratory problems such as bronchitis, chronic coughs and asthma. The resin of the tree is employed externally as an ointment to relieve aches and pains.Uses: For symptoms of cystitis, prostatitis, bronchitis, asthma, and chronic coughs. Tonic and energizer. Used in homeopathy as a mother tincture.

Large tree of the old fallow

Hymenaea has two dozen species of tall unarmed, resiniferous trees distributed in tropical parts of South America, Mexico and Cuba; the centre of speciation lies in the Amazon. Some yield excellent varnish resins. One, H. courbaril, has a yellowish or orange-colored resinous gum, collected in lumps at the base of the tree or by wounding the bark; it is employed as incense in churches and in the manufacture of varnishes. Terpenes and phenolics are responsible for the inhibition of growth of leaf fungus on these plants. (Arrhenius, 1983).

Ingredients: Pure 100% jatoba bark (Hymenaea courbaril) without any binders, fillers or other additives. This plant has been sustainably wild-harvested (without pesticides or fertilizers) in the Brazilian Amazon and is non-irradiated and non-fumigated.

Suggested Use: This plant is best prepared as a decoction. Use one teaspoon of powder for each cup of water. Bring to a boil and gently boil in a covered pot for 20 minutes. Allow to cool and settle for 10 minutes and strain warm liquid into a cup (leaving the settled powder in the bottom of the pan). It is traditionally taken in 1 cup dosages, 2-3 times daily. This decoction has also been traditionally used externally on the skin and as a douche. For more complete instructions on preparing herbal decoctions see the Methods for Preparing Herbal Remedies Page.

Contraindications: Not to be used during pregnancy or breast-feeding.

Other Practitioner Observations: Jatoba can provide a significant energy lift to some people. Take prior to 4 pm to avoid sleep disturbances.