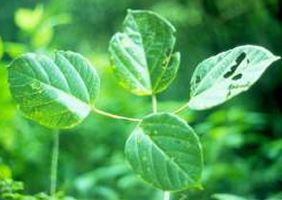 Iporuru is a shrubby tree that reaches 8-10 m in height with light-brown bark and violet flowers. It grows extensively in the lower elevations and flood plains of the Amazon River system in Peru, and is indigenous to the moist, tropical areas in Argentina, Bolivia, Brazil, Colombia, Paraguay, and Venezuela. Iporuru can be harvested only in the Amazon’s dry season; it spends the rainy season underwater. The locals believe that the active medicinal properties found in the bark are present only during the dry season.

For centuries the indigenous peoples of the Amazon have used the bark and leaves of iporuru for many different purposes and prepared it in many different ways. The plant commonly is used with other plants during shamanistic training and, sometimes, is an ingredient in ayahuasca (a hallucinogenic, multi-herb decoction used by South American shamans). Throughout the Amazon the bark or leaves are tinctured (generally with the local rum, called aguardiente) as a local remedy for rheumatism, arthritis, colds, and muscle pains. It is well known to the indigenous peoples of Peru for relieving the symptoms of osteoarthritis, and in aiding flexibility and range of motion. The Candochi-Shapra and the Shipibo Indian tribes use both the bark and roots for treating rheumatism. To prevent diarrhea, members of the Tikuna tribe take 1 tbsp. of bark decoction before meals. The pain-relieving properties of iporuru appear in topical treatments; crushed leaves are rubbed on painful joints and are beaten into a paste to apply to painful stingray wounds.

Today, iporuru remedies and products are sold in local markets and herbal pharmacies in Peru, where it is recommended highly for arthritis and rheumatism. In addition, locals prepare the leaves into a decoction for coughs. The leaves of iporuru are used in some parts of Peru to increase female fertility (mostly in cases where the male is relatively impotent). Richard Rutter, noted Peruvian ethnobotanist, insists that iporuru is widely used as an effective aphrodisiac and geriatric tonic for males. Throughout Peru it is regarded as a remedy for impotency as well as for balancing blood sugar levels in diabetics. Iporuru has been gaining popularity among North American athletes and health practitioners recently; reports have it that iporuru provides nutritional support to muscle and joint structures. Here in the U.S., its reported analgesic and anti-inflammatory properties have begun to make it popular also to those suffering from arthritis and other joint problems.

Little research has been done to catalog completely the phytochemicals in iporuru. Initial screening has revealed it to contain steroids, saponins, phenols, flavonols, flavones, tannins, xanthones, and alkaloids. The anti-inflammatory properties of iporuru are attributed to a group of alkaloids, including one called alchorneine, which are found in the bark of iporuru as well as several other species of Alchornea.

Likewise, there has been little clinical research on iporuru – despite its long history of use in South American herbal medicine. That which has been done, however, does help explain some of its traditional uses. Pharmacognosy students in Sweden documented that an ethanol extract of the stembark was capable of reducing lab-induced swelling and inflammation in rats when applied topically. These researchers also reported that the extract also was able to inhibit COX-1 prostaglandin synthesis. Prostaglandins, produced by the activity of the enzyme cyclooxygenase (COX), are linked to inflammatory processes and diseases. (COX-inhibitors are a newer class of anti-inflammatory and arthritis pharmaceutical drugs on the market.) This prostaglandin inhibition activity may, in part, explain the traditional use of iporuru for inflammatory joint and muscle disorders such as osteoarthritis, arthritis, and rheumatism. Other researchers in the U.S. confirmed these effects by injecting mice with an ethanol extract of iporuru and observing an anti-inflammatory effect against other chemical-induced inflammation.

While iporuru will probably long remain in the South American herbalist’s and shaman’s medicine chest of natural remedies for impotency, arthritis, pain and inflammation, its use by the rest of the world will be limited until more people and practitioners learn more about the plant and/or more research is performed. Very few iporuru products are sold here in the U.S., and it is only available through a handful of companies (which mostly include it in multi-herb combination formulas).

Traditional Preparation: The traditional impotency remedy in Peru calls for one cup of dried leaves to be macerated in 2 cups of water for one day, and 2-3 doses (of 1/2 cup) are drunk daily. For diabetes, 1/2 cup of dried leaves are infused in 4 cups of water, and one cup is drunk after each meal. As the leaves are prepared in standard infusions or cold macerations (indicating the beneficial chemicals providing the effects are water soluble), powdered leaves in capsules, tablets, or stirred into liquids can be substituted (1-2 g, two or three times daily).

1. “The bark of the Iporuru shrub is truly a treasure of the Amazon. It has been found to be very effective in cases of osteoarthritis. Unfortunately, this herb can only be harvested during the dry season in the Amazon for two reasons. First, during the rainy season, the shrubs are too far underwater and second, the active ingredients are present in the bark only in the dry season.”

2.”Iporuru is used by the indigenous peoples of Peru for relieving symptoms of osteoarthritis. It helps to increase flexibility in movement and range of motion.”

10. “Alchornea castaneifolia (Willd.) Juss. Euphorbiaceae. “Iporoni”, “lporuro”, “Ipururo”, “Ipurosa”, “Macochihua”. Alcoholic bark maceration used to treat rheumatism, arthritis, colds, and muscle pains after a long fishing day. The “Candochi-Shapra” and the “Shipibos” used the bark and roots to treat rheumatism. Iquitos herbalists recommend it for rheumatism (RVM). Pucallpa citizens take the leaf decoction orally for cough and rheumatism (VDF). “Tikunas” take one tablespoon bark decoction before meals for diarrhea (SAR). Around Piura, the leaves are used to increase fertility of females where the male is relatively impotent (FEO). Rutter stresses that it is an aphrodisiac and geriatric for males (RAR). Sometimes found in the famous “Rompe Calzon” aphrodisiac.”

11.”The primary Amazon herbs used for their synergistic effects during athletic training and recovery include the following: Catuaba and Marapuama as strong tonics and nervous system fortifiers; Marapuama also for its anti-rheumatic properties; Sarsaparilla to increase circulation, clear toxins and stimulate metabolism; Iporuru for support of muscle and joint structure; Samambaia for detoxification of waste products and anti-rheumatic properties; Una de gato for antioxidant properties; Tayuya to remove lactic acid accumulations; and Suma for anabolic (muscle-building) effects. (See Table 1)

There are 70 species of this pantropical genus. They are shrubs to medium-sized trees. The insect antifeedants of A. triplinervia have been studied (Hankinson, 1982); alkaloids have been found in A. floribunda (Khuong-Huu, 1972); the structure of the alkaloid alchomeine has been established (Cesario, 1970).

Amongst the Tikunas, a decoction of the bark, in one-tablespoon doses before meals, is considered to be a treatment for diarrhea. The crushed leaves are also rubbed on painful joints for relief. In Venezuela, a species of Alchornea is used in the form of cataplasm for wounds inflicted by the sting ray.

Igbeneghu, O. A., et al. “A study of the in vivo activity of the leaf extract of Alchornea cordifolia against multiply antibiotic resistant S. aureus isolate in mice.” Phytother. Res. 2007; 21(1): 67-71.

Ingredients: 100% pure iporuru leaves (Alchornea castaneifolia). No binders, fillers or additives are used. It is a wild harvested product—grown naturally in the Peruvian Amazon without any pesticides or fertilizers.

Suggested Use: This plant is best prepared as an infusion (tea): Use one teaspoon of powder for each cup of water. Pour boiling water over herb in cup and allow to steep 10 minutes. Strain tea (or allow settled powder to remain in the bottom of cup) and drink warm. It is traditionally taken in 1/2 cup amounts, 2-3 times daily. For more complete instructions on preparing herbal infusions, see the Methods for Preparing Herbal Remedies Page.