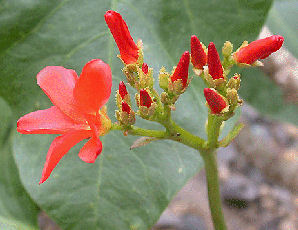 Huanarpo macho is medium shrubby tree (10 to 12 m in height) with pretty reddish-orange flowers. It is indigenous to Peru and can be found in abundance in the Marañon river valley in the Amazon and in the Puno district in Peru. Huanarpo macho is a plant that follows, what is termed in botany and ethnobotany as, the “Doctrine of Signatures.” The Doctrine is based on that, by observation, one can determine from the color of the flowers or roots, the shape of the leaves, the place of growing, or other “signatures,” what the plant should be used for. The young branch stems of the huanarpo macho tree are shaped like a man’s anatomy and for centuries these young branch stems have been used in traditional medicine systems to support, aid, and enhance male sexual function.

The Jatropha genus is a large tribe of plants with approximately 175 species of trees and shrubs in the tropics and subtropics of both hemispheres.

In herbal medicine systems in Peru, Huanarpo macho is considered aphrodisiac, anti-asthmatic, anti-diabetic, antitussive, anti-ulcerous, and nervine. It is widely used to restore male sexual potency, for premature ejaculation, erectile dysfunction, and as a male sexual tonic and aphrodisiac. It has recently been called “Peruvian Viagra” in various marketing programs and is as popular in Peru as a male aphrodisiac as muira puama is in Brazil for the same purpose. In addition, the branches and/or tree bark is also used in Peruvian herbal medicine for asthma, bronchitis, coughs, and diabetes in Peru. Herbalists and practitioners in Peru believe that huanarpo macho can block alpha-adrenoreceptors which reduce the effect of hormones that cause vasoconstriction of blood vessels in penile tissues and augment the production of norepinephrine which is essential in maintaining erectile function. Based on the chemistry of the plant, there is some support for that type of mechanism of action.

A different plant in the Jatropha family is also called “huanarpo” (Jatropha cilliata) in Peru. Although this plant also used as an aphrodisiac, this is a small perennial herb and the leaves and root are used to prepare a “huanarpo aphrodisiac” and it shouldn’t be confused with the huanarpo macho tree.

Several researchers reported in the last few years the possible role of proanthocyanidins as sexual stimulants, specifically able to correct erectile dysfunction and infertility. Thus, the high amount of these chemicals in huanarpo macho is in agreement with the traditional use of this plant as an aphrodisiac. The Italian researchers documenting the proanthocyanidins in huanarpo macho stated: “On the basis of these spectrometric data in J. macrantha stems extract proanthocyanidins exist with an extremely wide molecular weight range, from 290, corresponding to catechin, to 3144, corresponding to the oligomer generated from the condensation of 11 catechin units, and all the MW intermediates are present. This finding is very interesting considering that extracts rich in condensed tannins have been recently reported in literature to exert sexual stimulant activity and therapeutical activity in infertility; this is in agreement with the traditional use as an aphrodisiac of the plant under investigation.” A Peruvian researcher however, attributed the aphrodisiac effect of a tincture of huanarpo macho to its alkaloid content.

One of the main proanthocyanidins in huanarpo macho is one called proanthocyanidin B-3 and it occurs in large quantities in the young branch stems. Other researchers studying this antioxidant chemical report that it is capable of interacting with and regulating bradykinin (a hormone in the body). Both human and animal studies have demonstrated that the corpus cavernosum is capable of relaxing in the presence of bradykinin and impairment of endothelium-dependent cavernosal smooth muscle relaxation occurs in vascular-associated diseases, such as diabetes, hypertension, and hypercholesterolemia which cause erectile failure. Regulating bradykinin, in the manner which proanthocyanidin B-3 does, has also been suggested as a possible treatment for erectile dysfunction and/or achieving and maintaining an erection for longer periods of time.

With such a high amount of antioxidant proanthocyanidins, it’s not surprising that crude extracts of huanarpo macho root and bark were reported with antioxidant actions. In a study conducted with mice in 2003, researchers mixed 5 grams of huanarpo macho ground powder in 100 ml of water and gave it to mice to drink as their drinking water at will. At the end of thirty days, the group of mice receiving the huanarpo macho had increased their testosterone levels significantly over the control group which only received regular water. Progesterone and estrogen levels did not increase. These researchers attributed some of these hormonal effects to huanarpo macho’s sapogenin chemicals.

While scientists are still hypothesizing whether huanarpo macho’s beneficial effect on male sexual function stems from its alkaloid, proanthocyanidin, or sapogenin chemicals, it remains to be one of the most popular natural remedies in Peru for erectile dysfunction and as an overall male sexual stimulant and libido aid. It is gaining in recognition here in the United States and showing up in several male sexual stimulant products, and in combination with other plants such as maca, muira puama and catuaba (other South American aphrodisiac plants). Huanarpo macho can now be found in capsules, tinctures, and in combination products sold in the U.S. natural products industry.

Traditional Preparation: The young branch stems are typically prepared in alcoholic tinctures for its sexual stimulant actions. The branch stems and/or the tree bark are usually decocted in water for remedies pertaining to the upper respiratory system and lungs. See Traditional Herbal Remedies Preparation Methods page if necessary for definitions.

Zhao, J., et al. “Anti-tumor-promoting activity of a polyphenolic fraction isolated from grape seeds in the mouse skin two-stage initiation-promotion protocol and identification of procyanidin B5-3′-gallate as the most effective antioxidant constituent.” Carcinogenesis. 1999; 20:1737–1745.

Ingredients: 100% pure huanarpo macho stem wood and bark (Jatropha macrantha). No binders, fillers or additives are used. This plant is non-irradiated and non-fumigated, and has grown naturally in Peruvian Amazon without pesticides or fertilizers.

Suggested Use: Huanarpo Macho is best prepared as an alcohol tincture. Combine 1 part bark powder with 4 parts 90 proof alcohol (everclear or vodka). Allow to macerate for 2 weeks while agitating solution daily. Strain into a clean bottle and seal. It is traditionally taken in dosages of 3 ml (90 drops) twice daily or as needed. For more complete instructions on preparing herbal decoctions see the Methods for Preparing Herbal Remedies Page.