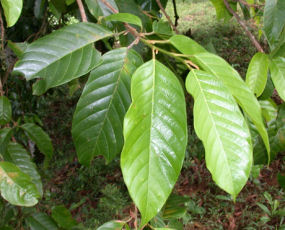 Huacapu is a huge canopy tree that can be found throughout the Amazon rainforest. It grows as far north as Nicaragua and Panama and can also be found in the rainforests of Costa Rica. Huacapu can grow up 25 meters high (8 stories high!) with a straight broad trunk up to 120 cm in diameter. The tree has a thin and fissured bark with many holes and it exudes a white latex when cut. Its leaves are 10-16 cm long by 4-6 cm wide and waxy in appearance. The huacapu tree blooms mainly during June and July with cascades of cream colored flowers on peduncles. Then it produces an oval drupe-like fruit with a single seed inside that is enjoyed by humans and animals alike. Fruits are dispersed in the forest by birds, bats and small rodents.

The huacapu tree is considered one of the most durable, heaviest, and hardest tropical woods of the Amazon. The tree is largely exploited and extracted by the timber and logging industries for lumber and house construction materials. It is commonly used by local inhabitants as foundation house poles since it is heavy, straight and rot-resistant. It has been so heavily logged in Costa Rica for construction materials, that it now appears on their local endangered species list.

The Indian tribes in the Amazon sometimes use huacapu bark as a fish poison. The Waorani and Ketchwa tribes in Ecuador pound the bark until it is bruised and then put it into small streams and ponds where it stuns the fish and they can be easily collected on the top of the water. The bark is also often used as a malaria remedy, as well as for tuberculosis, hepatitis, and rheumatism by various Indian communities in the Amazon. The outer bark is considered “too strong a medicine” therefore, more often, the inner bark is used when preparing remedies for humans.

In herbal medicine systems in Ecuador huacapu bark is prepared as a decoction and used as a respected remedy for herpes, lung cancer, hepatitis, and tuberculosis. It is also used for intestinal worms and parasites, muscular pain, and externally for skin irritations. The pulverized bark of huacapu is also used externally as a poultice for sore limbs, sore kidneys and skin problems.

In Peruvian herbal medicine systems huacapu is employed for many of the same conditions. An infusion or decoction of the bark is highly regarded for hepatitis, malaria, herpes, and rheumatism. It is also used for leishmaniasis (a tropical parasitic disease carried by sand flies), and used externally on lacerations and wounds. A common remedy for rheumatism is to macerate 200 grams of huacapu bark in a liter of alcohol for 7-10 days (a tincture). It is taken in tablespoon dosages each day for 15 days.

Huacapu bark contains triterpenes, xanthones, lipids, tannins, and acids. The main bioactive chemical in the bark is a lipid called minquartynoic acid. This plant chemical has been the subject of research and various scientists have reported that it is cytotoxic to a large diverse line of cancer cells including human lung cancer cell lines, ovarian, colon and neuroblastoma cancer cell lines. Another research group reported it passed the initial screening test for antitumor activity as well as demonstrated actions against the malaria and leishmania parasites. A research group reported in 2000 that minquartynoic acid demonstrated effective anti-viral actions against the HIV virus at as little as 2.2 mcg/ml which might explain why the tree bark has been so popularly used for other virus like hepatitis and herpes.

The research on huacapu to date is quite preliminary since scientists now seem more focused on its main bioactive chemical instead. Researchers in the United States first reported in 1988 and 1989 that a water extract of huacapu bark passed the initial antitumor screening test, as well as an in vitro cell culture test against cancer cells in amounts less than 4 mcg/ml. This was reconfirmed by a European research group who published similar reports in 2003 and 2004. In earlier research in 1996 researchers reported that a methanol extract of huacapu bark demonstrated antibacterial actions against two antibiotic-resistant strains of Staphylococcus, as well as Pseudomonas and Bacillus

While little research on the tree bark exists, research has been more forthcoming on huacapu’s main active plant chemical which is documented with antimalarial, antiviral, antumoral, and antibacterial actions. The actions of minquartynoic acid do help to explain and support huacapu’s main traditional uses for microbial diseases such as herpes, hepatitis, and tuberculosis, for lung cancer, and malaria. The tree bark is a significant source of this highly active plant chemical. Huacapu is quite popular in Ecuador and Peru, however it is not very well known here in the U.S; only one or two products are available for purchase in the American herbal market.

Traditional Preparation: Huacapu bark is traditionally prepared in infusions and decoctions. However, for rheumatism and muscle pain, it is traditionally prepared as an alcohol tincture. The bark is a source of tannins that have been used to dye clothing. Practitioners report using the bark in tinctures and decoctions can cause dark-colored stools which is normal and due to the tannin content of the bark.

Contraindications: None known. Large dosages are reported to have a laxative or purgative effect.