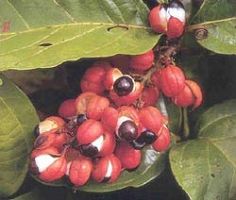 Guaraná is a creeping shrub native to the Amazon (and particularly the regions of Manaus and Parintins). In the lushness of the Brazilian Amazon where it originates, it often grows to 12 m high. The fruit is small, round, bright-red in color, and grows in clusters. As it ripens, the fruit splits and a black seed emerges – giving it the appearance of an “eye” about which Indians tell legends.

The uses of this plant by the Amerindians predates the discovery of Brazil. South American Indian tribes (especially the Guaranis, from whence the plant’s name is derived) dry and roast the seeds and mix them into a paste with water. They then use it much the same way as chocolate – to prepare various foods, drinks, and medicines. The rainforest tribes have used guaraná mainly as a stimulant and as an astringent (drying agent) for treating chronic diarrhea. It is often taken during periods of fasting to tolerate dietary restrictions better. Botanist James Duke cites past and present tribal uses in the rainforest: as a preventive for arteriosclerosis; as an effective cardiovascular drug; as an pain-reliever, astringent, stimulant, and tonic used to treat diarrhea, hypertension, fever, migraine, neuralgia, and dysentery.

Over centuries the many benefits of guaraná have been passed on to explorers and settlers. European researchers began studying guaraná (in France and Germany) in the 1940s, finding that Indians’ uses to cure fevers, headaches, cramps, and as an energy tonic were well-founded. Guaraná is used and well known for its stimulant and thermogenic action. In the United States today, guaraná is reputed to increase mental alertness, fight fatigue, and increase stamina and physical endurance. Presently, guaraná is taken daily as a health tonic by millions of Brazilians, who believe it helps overcome heat fatigue, combats premature aging, detoxifies the blood, and is useful for intestinal gas, obesity, dyspepsia, fatigue, and arteriosclerosis. The plant, considered an adaptogen, is also used for heart problems, fever, headaches, migraine, neuralgia, and diarrhea. Guaraná has been used in body care products for its tonifying and astringent properties, and to reduce cellulite. Guaraná also has been used as an ingredient in shampoos for oily hair and as a ingredient in hair-loss products. In Peru the seed is used widely for neuralgia, diarrhea, dysentery, fatigue, obesity, cellulite, heart problems, hypertension, migraine, and rheumatism.

The first chemical examination of guaraná seeds was performed by the German botanist Theodore von Martius in the 1700s. He isolated a bitter, white crystalline substance with a remarkable physiological action. Von Martius named this substance guaranine, and it was later renamed caffeine. Many today still believe guaranine to be a unique phytochemical in guaraná . It is, however (according to chemists), caffeine. As one group of researchers put it, guaranine is a product of crude laboratory processes and “should be considered non-existent, being in reality impure caffeine.” Guaranine is probably just caffeine bound to a tannin or phenol. In living plants, xanthines (such as caffeine) are bound to sugars, phenols, and tannins, and are set free or unbound during the roasting process. Guaraná seeds contain up to 4-8% caffeine (25,000 to 75,000 ppm), as well as trace amounts of theophylline (500 to 750 ppm) and theobromine (300 to 500 ppm). They also contain large quantities of alkaloids, terpenes, tannins, flavonoids, starch, saponins, and resinous substances.

*Based on quantities used in standard preparation methods

The xanthine alkaloids (caffeine, theophylline, theobromine) are believed to contribute significantly to guaraná’s therapeutic activity. In clinical studies, theophylline stimulates the heart and central nervous system, enhances alertness and alleviates fatigue. It also has strong diuretic activity and reduces constriction of the bronchials, making it useful in asthma. Theobromine has similar effects. Certainly many traditional uses of guaraná may be explained by its caffeine content. Among its many documented effects, caffeine has been shown to facilitate fat loss and reduce fatigue.

Toxicity studies with animals (in 1998) have shown that guaraná is non-toxic, even at high dosages (up to 2 g/kg of body weight). Toxicity has been reported in only one human: a female who had an existing heart condition (mitrial valve prolapse).

While the Indians have been using guaraná for centuries, Western science has been slowly, but surely, validating that the indigenous uses are well-grounded. In 1989, a U.S. patent was filed on a guaraná seed extract which was capable of inhibiting platelet aggregation (reducing sticky blood). The patent described guaraná’s ability to prevent the formation of blood clots and to help in the breakdown of already-formed clots. Clinical evidence was presented in conjunction with the 1989 patent and again in 1991 by a Brazilian research group that reported these antiaggregation properties. Once again, scientific validation is given to a plant used for centuries by the Indians as a heart tonic and to “thin the blood.”

The use of guaraná as an effective energy tonic, for mental acuity, and to enhance long-term memory recently was validated by scientists. In a 1997 in vivo study, guaraná increased physical activity of rats, increased physical endurance under stress, and increased memory with single doses as well as with chronic doses. Interestingly, the study revealed that a whole-seed extract performed more effectively than did a comparable dosage of caffeine or ginseng extract. Another Brazilian research group has been studying guaraná ‘s apparent effect of increasing memory, thought to be linked to essential oils found in the seed. The plant also was found to enhance memory retention and to have an anti-amnesic activity in mice and rats. A U.S. patent has been filed on a combination of plants (including guaraná) for promoting sustained energy and mental alertness “without nervousness or tension.” Guaraná (often in combination with other plants) also has been found to facilitate weight loss, by creating a feeling of fullness and having a mild thermogenic effect.

Guaraná has traditionally been used for headaches and migraines. A 1997 study found the plant to have pain-relieving activity, which may explain its use for not only headaches but neuralgia, lumbago and rheumatism. More recently (in 2001) a U.S. patent was filed on a combination of plants, including guaraná , to “relieve pain and other symptoms associated with migraines and headaches.”

Guaraná’s antibacterial properties against E. coli and Salmonella have been documented as well. Guaraná has also demonstrated antioxidant properties; researchers concluded, “Guaraná showed an antioxidant effect because, even at low concentrations (1.2 mcg/ml), it inhibited the process of lipid peroxidation.” In 1998, scientists demonstrated that a guaraná extract significantly increased the blood glucose levels and suppressed exercise-induced hypoglycemia in mice.

Guaraná’s good health benefits and its standing as a natural stimulant, has caused its popularity to grow steadily worldwide. It can be found under many labels and as an ingredient in many herbal formulas, energy drinks, and protein bars. Unfortunately, too many (unethical) manufacturers are simply adding the guaraná name to their labels to capitalize on its popularity – and adding chemical caffeine to their products instead. New, standardized extracts of guaraná are available these days that “guarantee” and “standardize” the extract to the caffeine content. Unfortunately, many of these comprise a seed powder or extract to which caffeine has been added – rather than concentrating the caffeine thru an extraction process of the natural seeds.

Recently, the Food and Drug Administration published results of their testing of 24 commercial guaraná products sold over the counter. They determined that “results and chromatographic profiles for 14 commercial products in solid dosage form indicate that a number of these products may not contain authentic guaraná as an active ingredient or contain less than the declared quantity of guaraná .” Consumers and manufacturers need be aware of these inconsistencies to deal with reputable suppliers in purchasing guaraná products and supplements. Manufacturers buying guaraná extracts and standardized extracts should demand assays that show not only the caffeine content – but the theobromine and theophylline content as well. This will determine if the actual seed was concentrated into an extract. A good hint is to compare the prices of a supplement and a kilo of guaraná extract-if the extract is less than 3-4 times the cost of natural seed powder, it is likely a natural seed powder with some added caffeine.

Cautions: Avoid if allergic or sensitive to caffeine.

Traditional Preparation: One-half to one cup seed infusion 1-3 times daily or 1-3 ml of a 4:1 tincture twice daily; 1-2 g of powdered seed in tablets or capsules (or stirred into water or juice) 1-3 times daily can be substituted, if desired. Therapeutic dosages are reported to be 4-5 g daily. Relatively new to the U.S. market are guaraná extracts that are concentrated and standardized to the caffeine content (between 5% and 15%). Follow the labeled instructions and dosages for these products.

Not to be used during pregnancy or while breast-feeding.

Guaraná contains caffeine and should not be used by those who are sensitive or allergic to caffeine or xanthines. Excessive consumption of caffeine is contraindicated for persons with high blood pressure, cardiac disorders, diabetes, ulcers, epilepsy, and other disorders.

Drug Interactions: May potentiate anticoagulant medications such as Warfarin. May have adverse effects (headaches) if used with MAO-inhibitors.

Ingredients: 100% pure guaraná seed powder (Paullinia cupana). No binders, fillers or additives are used. It is a wild harvested product—grown naturally in the Brazilian Amazon without any pesticides or fertilizers.

Suggested Use: This plant is best prepared as a decoction. Use one teaspoon of powder for each cup of water. Bring to a boil and gently boil in a covered pot for 20 minutes. Allow to cool and settle for 10 minutes and strain warm liquid into a cup (leaving the settled powder in the bottom of the pan). It is traditionally taken in 1 cup dosages, 1-3 times daily, or as desired. For more complete instructions on preparing herbal decoctions, see the Methods for Preparing Herbal Remedies Page.

Not to be used during pregnancy or while breast-feeding.

Guaraná contains caffeine and should not be used by those who are sensitive or allergic to caffeine or xanthines. Excessive consumption of caffeine is contraindicated for persons with high blood pressure, cardiac disorders, diabetes, ulcers, epilepsy, and other disorders.

Drug Interactions: May have adverse effects (headaches) if used with MAO-inhibitors.