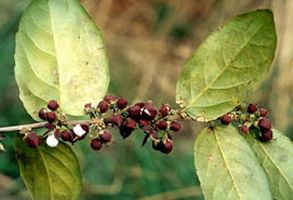 Guacatonga grows as a shrub or small tree usually 2 or 3 meters tall, but sometimes grows up to 10 meters in undisturbed areas of the Amazon. In the clay soils of the Amazon, the plant has adapted for nutrient absorption and support by forming extensive lateral roots that are white, stiff, and covered with a corky bark. The tree produces small white, cream, or greenish flowers (which smell like a mixture of honey and urine) crowded on short stalks on the leaf axils. After flowering it produces small fruits, 3-4 mm in diameter, which split open to reveal three brown seeds covered with a red-to-orange aril. Guacatonga grows wild throughout the tropics, adapting to both forests and plains. It is native to Cuba, Jamaica, Hispaniola, Puerto Rico, the Caribbean, Central America, and South America (including Brazil, Peru, Argentina, Uruguay, and Bolivia).

Guacatonga has a rich history in herbal medicine systems in nearly every tropical country where it grows. The Karajá Indians in Brazil prepare a bark maceration to treat diarrhea; the Shipibo-Conibo Indians of Peru use a decoction of the bark for diarrhea, chest colds and flu. Other Indian tribes in Brazil mash the roots or seeds of guacatonga to treat wounds and leprosy topically. Indigenous peoples throughout the Amazon rainforest have long used guacatonga as a snakebite remedy. A leaf decoction is brewed that is applied topically and also taken internally. The same jungle remedy is used topically for bee stings and other insect bites. This native use found its way out of the rainforest and into current herbal medicine practices in cities and villages in South America. It has been validated by scientists in the last several years who documented the leaf extract as capable of neutralizing several types of bee and snake venoms.

Guacatonga has a long history of use in Brazilian herbal medicine, documented in early folk medicine books as an antiseptic and wound healer for skin diseases (in 1939), as a topical pain-reliever (in 1941), and as an anti-ulcer drug (in 1958). It is currently used in Brazilian herbal medicine systems as a blood purifier, anti-inflammatory, and antiviral to treat rheumatism, syphilis, herpes, stomach and skin ulcers, edema, fevers of all kinds, diarrhea, and as an topical pain-reliever. It is also employed topically for burns, wounds, rashes, and such skin disorders as eczema and . The natural herbal remedy calls for 20 grams of dried leaves infused in 1 liter of water; quarter-cup amounts are taken orally 2-3 times daily.

The plant is also a popular herbal remedy employed in Bolivian herbal medicine, where it is considered to relieve pain, reduce inflammation, reduce stomach acid and prevent ulcers, stop bleeding and heal wounds. There it is used to treat skin diseases, cancer, stomach ulcers, snakebite and bee stings, herpes, and in dental antiseptic mouthwash products.

The chemical makeup of guacatonga is quite complex. Scientists conducting the antivenin research discovered that the leaves and twigs of the plant contain a phytochemical called lapachol. This is the well known and studied anticancerous/antifungal compound from which another rainforest plant, pau d’arco (Tabebuia impetiginosa), gained much renown. (Pau d’arco is also featured in this book.) While other researchers have been studying the anticancerous and antitumorous properties of guacatonga, a completely different set of phytochemicals has fueled their interest. These compounds, called clerodane diterpenes, are found abundantly in guacatonga and some have been patented as antisarcomic agents. Clerodane diterpenes have been documented with a wide range of biological activities ranging from insect antifeedants, to antitumorous, anticancerous, and antibiotic agents, to HIV replication inhibitors. Some of the clerodane diterpenes documented in guacatonga are novel chemicals which scientists have named casearins (A thru S). Other chemicals in guacatonga include caprionic acid, casearia clerodane I thru VI, casearvestrin A thru C, hesperitin, lapachol, and vicenin.

The research on guacatonga’s anticancerous properties began in 1988 by Japanese researchers from the Tokyo College of Pharmacy and Pharmacognosy. They published one preliminary trial in 1988 on their discovery of these novel clerodane diterpenes and their anticancerous and antitumorous activities. The study indicated that an ethanol extract of the leaf showed strong antitumorous activity in laboratory mice with sarcomas. As soon as they made this discovery, they rushed to patent it, filing a Japanese patent for the casearin chemicals they’d discovered as new antitumorous agents. They published a follow-up study in 1990, again reporting their results from injecting mice with sarcomas with an ethanol extract of guacatonga leaves (100 mg per gram of body weight) and confirming their previous findings. They then tested individual casearins against various human cancer cell lines and published two more studies in 1991 and 1992. These studies reported newly isolated casearin chemicals and their antitumorous and anticancerous actions against various cancer tumor cells. Oddly, the Japanese researchers have not published any further studies and, since they had already filed patents, other research groups have not been forthcoming in funding research dollars on these patented antitumorous plant chemicals.

In 2002, however, a well-known research group in North Carolina discovered three new casearins in the leaves and stems of guacatonga that the Japanese had not (and, obviously, hadn’t patented). They named the new chemicals casearvestrin A, B and C, and published their first study in February, 2002, stating: “All three compounds displayed promising bioactivity, both in cytotoxicity assays against a panel of tumor cell lines and in antifungal assays . . .” Their research tested the new plant chemicals against human lung, colon and ovarian tumor cells and indicated all three compounds had toxicity to cancer cells in very small amounts. This research was supported by a grant from the National Cancer Institute, National Institutes of Health (NCI) and performed by a non-profit biotech company, a large pharmaceutical company and a major university. The NCI has also performed research in-house on clerodane diterpenoids found in another Casearia plant species documenting the antitumor properties of its novel diterpenoids and another university research group has documented the anticancerous properties of this class of chemicals in a Casearia plant from the Madagascar rainforest as well. It will be interesting to see if this diversified group will actually develop these chemicals into new effective chemotherapeutic agents; their research is ongoing.

All other research on the chemicals and activities of guacatonga has been performed by Brazilian research groups over the years. The first published toxicity study with rats indicated no toxicity with an ethanol extract of the leaves at 1840 mg per kg. This research group, at the University of Sao Paulo, studied the anti-ulcer properties of the plant (based on its long history of use as an effective herbal remedy for ulcers). They published two studies confirming these benefits. The first study, with rats (in 1990), showed that a crude leaf extract reduced the volume of gastric secretion by 42%, but had little effect on pH. The extract also prevented lab-induced acute gastric mucosal injury which was equivalent to the antiulcer drug cimetidine (Tagamet®). Ten years later they published a second rat study, documenting that a crude leaf extract protected the stomach lining without changing gastric pH and sped healing of acetic acid-induced chronic ulcers and H. pylori ulcers.

Another Brazilian researcher documented that a bark-and-leaf infusion demonstrated pain relieving and mild anti-inflammatory properties in mice. A university researcher followed up on the anti-inflammatory research, publishing in her dissertation that an extract of the leaves was as effective against inflammation in mice as the NSAID drugs Prioxicam® and Meloxicam®. Leaf extracts have also been shown by two research groups to be active against common food poisoning bacteria strains, Bacillus cerus and B. subtilis, but inactive against such other common bacteria as Staphylococcus, Streptoccoccus, and E. coli.

It will be interesting to see what happens with guacatonga’s ongoing cancer research – especially with sarcomas. These types of tumors typically grow very quickly, are resistant to many of the approved cancer drugs, and represent a bleak prognosis for most cancer patients. In the meantime, guacatonga is considered a safe plant and a great natural herbal remedy for ulcers, inflammation, and pain, and will continue to be used as a snakebite remedy throughout the Amazon jungles by the indigenous peoples. Although not widely available in the U.S. market yet, hopefully as more people learn of its beneficial uses, the market demand for it will increase.

Traditional Preparation: Twenty grams of dried leaves are infused in a liter of water and quarter-cup amounts are taken 2-3 times daily with meals as a digestive and anti-ulcer aid. Since most of the chemicals are water soluble, powdered leaves in tablets or capsules (1-2 grams twice daily) can be substituted if desired. The above infusion can also be used topically for wounds, burns, skin rashes, and as a mouth wash after dental work or tooth extractions.

Ingredients: 100% pure guacatonga (Casearia sylvestris) leaf & stem. No binders, fillers or additives are used. This is a wild harvested plant—grown naturally in the Brazilian Amazon without any pesticides or fertilizers.

This plant is best prepared as an infusion (tea). Use one teaspoon of powder for each cup of water. Pour boiling water over herb in cup and allow to steep 10 minutes. Strain tea (or allow settled powder to remain in the bottom of cup) and drink warm. It is traditionally taken in ½ to 1 cup dosages, 2-3 times daily. For more complete instructions on preparing herbal infusions see the Methods for Preparing Herbal Remedies Page.