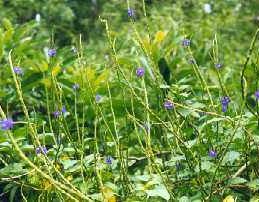 Gervâo is a weedy annual (and sometimes perennial) herbaceous plant that grows 60–120 cm tall. It bears small reddish-purple to deep blue flowers that grow along tall bracts that are favored by butterflies. It is indigenous to most parts of tropical America and, although some consider it a semi-invasive weed, it is sometimes cultivated as an ornamental plant for its blue flowers and deeply-serrated, dark green leaves. Gervâo belongs to the large Verbenaceae family, which comprises about 100 genera and 2,600 species (including the common vervain and verbena plants). It is often referred to as “bastard vervain” or “wild verbena.” While very similar to verbena and vervain in appearance and growth habits, gervâo is a different species of plant. Two very similar species of Stachytarpheta grow in the tropics and are used interchangeably (and share the same common names) in many countries’ herbal medicine systems—S. cayennensis and S. jamaicensis.

Gervâo is widely used by indigenous peoples throughout the Amazon. The Créoles use the leaf tea for dysentery, while the Kofans in northwest Amazonia drink a decoction of the plant to relieve stomach pains. Indigenous peoples of Peru use the plant for diabetes and the Wayãpi and Palikur Indians in Guyana use the plant in baths to relieve colds and headaches. Other tribes in the Amazon prepare an infusion or decoction of the plant to take internally for fevers (including yellow fever), allergies, stomach problems, and intestinal parasites.

In Brazilian herbal medicine systems the plant is considered to stimulate and aid digestion, suppress coughs, reduce fever, expel worms, increase perspiration, and promote menstruation. The natural remedy there is usually an infusion prepared with the leaves or entire aerial parts. It is employed mainly today by Brazilian herbalists and practitioners as a stomach tonic; to stimulate the function of the gastrointestinal tract; for dyspepsia, allergies, asthma, and fevers; and for chronic liver problems. Gervâo is also used in Brazil as a diuretic for various urinary complaints and as a mild laxative for constipation. Externally it is used to clean ulcers, cuts, and wounds. In Cuban herbal medicine (where the plant is named verbena cimarrona) the plant is considered to be abortive, laxative, diuretic, and sedative and used to reduce spasms, depress the central nervous system, promote menstruation, aid milk production, and reduce blood pressure.

In the West Indies, gervâo commonly is employed to expel intestinal worms and other parasites; several commercial preparations sold in Jamaica for parasites contain gervâo. One popular preparation combines gervâo with graviola (Annona muricata) and epazote (Chenopodium ambrosioides) into a natural remedy for this purpose (both plants are featured in this book). Besides its long history of use as a parasite remedy (which was documented as early as 1898), gervâo also has been used by women in Jamaica and the West Indies for many types of menstrual disorders and female complaints. In many parts of the West Indies, a leaf tea is drunk after childbirth to restore health and to increase the supply of mother’s milk. In Belize, a tea brewed from the aerial parts of the plant is taken for nervousness, heart conditions, stomachache, dyspepsia, neuralgia, cough, colds, fever, flu, and liver complaints. There the mashed leaves are also used in a poultice for boils and infected sores, and the leaf juice is taken internally for intestinal parasites.

Gervâo contains flavonoids, terpenes, phenols, and steroids. Several of these plant chemicals have been documented with biological activities that may help explain the plant’s indigenous uses (especially for liver ailments and respiratory problems). The first of these is an iridoid glycoside called verbascoside (also called acetoside), found in several plants in the Verbenaceae genus. In clinical research, this powerful antioxidant phytochemical has been documented with neuroprotective, antiviral, antibacterial, liver protective, cardioactive, and antitumorous effects. A flavonoid in gervâo called scutellarein has been documented with cardioprotective, anti-inflammatory and antiviral actions. Another flavonoid found in gervâo called hispidulin is also found in verbena and vervain and is considered one of the main “active” chemicals in all three plants. Hispidulin has been reported to have anti-asthmatic, bronchodilator, and antispasmodic properties; liver detoxifing actions; and helps to normalize sticky blood.

The first biological activity studies were published on gervâo in 1962 by researchers in India who reported that the plant demonstrated antispasmodic and vasodilator activities in several small animal studies. In 1990, two clinical studies reported that leaf extracts evidenced larvicidal effects, which might help explain its long history of use for intestinal parasites. In 1998, the anti-inflammatory and pain-relieving properties of gervâo were demonstrated in rats. In this study, researchers pre-treated rats with gervâo and showed that it inhibited significantly their ability to induce inflammation with chemical agents. They isolated two chemicals in the plant (vebascoside and another iridoid chemical, ipolamiide) and tested them individually for these effects. These chemicals demonstrated a marked anti-inflammatory effect in rats (administered 4 hours after chemically inducing inflammation) of 94% and 70%, respectively. They attributed this effect, in part, to the extract (and its phytochemicals) which inhibited a histamine reaction.

Another area of research has verified gervâo’s longstanding use for gastric and intestinal disorders. In a 1995 Brazilian study, a gervâo extract demonstrated anti-diarrhea effects in rats. Another (1997) Brazilian study demonstrated antacid, antiulcer, and laxative effects in mice. In this study, a water extract of the whole plant increased intestinal motility, protected against ulcers from various chemical agents, and inhibited gastric secretion. These researchers noted the same histamine-blocking properties in this ulcer model that was observed in the anti-inflammatory model, along with another possible pathway of action. They concluded that “whatever the mechanisms involved, the present data confirm the plant’s effectiveness as antacid/antiulcer and laxative.” In the mouse and rat studies performed thus far, no toxicity was noted when the plant was taken orally (at up to 2 g per kg of body weight).

In the mouse and rat studies noted above, no toxicity was noted when the plant was taken orally (at up to 2 g per kg of body weight). In herbal medicine today, gervâo is regarded as a safe, natural remedy when prepared in decoctions and infusions (taken orally or applied externally). A researcher in Panama, however (who injected mice intraperitoneally with varying dosages of a leaf extract) reported toxic effects and even death at the highest dosages.

In herbal medicine today, gervâo is regarded as a safe, natural remedy when prepared in decoctions and infusions (taken orally or applied externally). A researcher in Panama, however (who injected mice with varying dosages of a leaf extract) reported toxic effects and even death at the highest dosages. While gervâo is a well known and popular natural herbal remedy in South America for digestion and liver problems, colds, flu, asthma, and as a natural antihistamine and anti-inflammatory, practitioners in North America are just beginning to learn about its many uses. With its many applications, gervâo is sure to increase in popularity as more people learn of it many effective uses.

Cautions: Avoid use when pregnant, if allergic to aspirin or have a heart condition.

Traditional Preparation: One-half cup of a whole herb infusion is taken one to two times daily or 1–3 ml of a 4:1 tincture is taken twice daily. If desired, 1–2 g powdered herb in tablets, capsules, or stirred into juice or water daily may be substituted.

Gervâo has been used in herbal medicine as an abortive agent and, therefore, is probably contraindicated during pregnancy.

Gervâo has been documented with vasodilator properties in a animal study and, therefore, may lower blood pressure. Those with low blood pressure or those on antihypertensive medications should consult their doctor before using gervâo.

Stachytarpheta cayennensis (but not S. jamaicensis) has been reported to contain a small amount of naturally-occurring salicylic acid. This phytochemical is the natural precursor to aspirin. Those allergic to aspirin should probably avoid using this plant product.

Drug Interactions: None reported, however the plant might potentiate heart and blood pressure medications.

Hayashi, K., et al. “Acteoside, a component of Stachys sieboldii MIQ, may be a promising antinephritic agent (2): Effect of acteoside on leukocyte accumulation in the glomeruli of nephritic rats.” Jpn. J. Pharmacol. 1994 Sep; 66(1): 47-52.

Ingredients: 100% pure gervâo leaf (Stachytarpheta jamaicensis). No binders, fillers or additives are used. It is a wild harvested product—grown naturally in the Brazilian Amazon without any pesticides or fertilizers.

Suggested Use: This plant is best prepared as an infusion (tea). Use one teaspoon of powder for each cup of water. Pour boiling water over herb in cup and allow to steep 10 minutes. Strain tea (or allow settled powder to remain in the bottom of cup) and drink warm. It is traditionally taken in 1/2 cup amounts, twice daily. For more complete instructions on preparing herbal infusions, see the Methods for Preparing Herbal Remedies Page.

Not to be used during pregnancy or while breast feeding.

Drug Interactions: None reported, however gervâo might enhance the effect of blood pressure medications.

Share and Enjoy:
Tagged with: a stomach tonic • Allergies • Asthma • Fevers • for chronic liver problems • for dyspepsia. • Gervâo is also used in Brazil as a diuretic for various urinary complaints and as a mild laxative for constipation. • to stimulate the function of the gastrointestinal tract