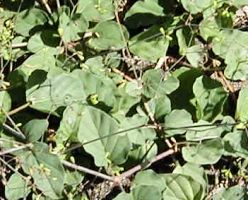 Synonyms: Boerhavia adscendens, B. caribaea, B. coccinea, B. erecta, B. paniculata, B. repens, B.viscosa

Erva tostão is a vigorous, low-growing, spreading vine with a long, tuberous tap root. It produces yellow and white flowers and is sometimes considered an invasive weed. It can be found in many tropical and warm-climate countries. Indigenous to Brazil, it is found in abundance along roadsides and in the forests in and near São Paulo, Rio de Janeiro, and Minas Gerais. Erva tostão is also indigenous to India, where it is found in abundance in the warmer parts of the country. Erva tostão is called punarnava in India, where it has a long history of use by indigenous and tribal people and in Ayurvedic herbal medicine systems.

The roots of erva tostão have held an important place in herbal medicine in both Brazil and India for many years. G. L. Cruz, one of Brazil’s leading medical herbalists, reports erva tostão is “a plant medicine of great importance, extraordinarily beneficial in the treatment of liver disorders.” It is employed in Brazilian herbal medicine to stimulate the emptying of the gallbladder, as a diuretic, for all types of liver disorders (including jaundice and hepatitis), gallbladder pain and stones, urinary tract disorders, renal disorders, kidney stones, cystitis, and nephritis. In Ayurvedic herbal medicine systems in India, the roots are employed as a diuretic, digestive aid, laxative, and menstrual promoter and to treat gonorrhea, internal inflammation of all kinds, edema, jaundice, menstrual problems, anemia, and liver, gallbladder, and kidney disorders. Throughout the tropics, erva tostão is considered an excellent natural remedy for guinea worms — a bothersome tropical parasite that lays its eggs underneath the skin of humans and livestock; the eggs later hatch into larvae or worms that eat the underlying tissue. The roots of the plant are normally softened in boiling water and then mashed up and applied as a paste or poultice to the affected areas to kill the worms and expel them from the skin.

Novel plant chemicals have been found in erva tostão, including flavonoids, steroids, and alkaloids, many of which drive its documented biological activities. The novel alkaloids found in erva tostão have been documented with immune modulating effects. In one study, the alkaloid fraction of the root evidenced a dramatic effect in reducing an elevation of cortisol levels under stressful conditions (cortisol is an inflammatory chemical produced in the body in an immune response). Simultaneously, the alkaloids (and a whole root extract) also prevented a drop in immune system performance indicating an adaptogenic immune modulation activity, which might suggest it could be helpful in preventing adrenal exhaustion.

Erva tostão has long been used in traditional medicine systems as a diuretic (to increase urination) for many types of kidney and urinary disorders. The diuretic action of erva tostão has been studied and validated by scientists in several studies. Researchers showed that low dosages (10–300 mg per kg of body weight) produced strong diuretic effects, while higher dosages (more than 300 mg/kg) produced the opposite effect—reducing urine output. Later research verified these diuretic and antidiuretic properties, as well as the beneficial kidney and renal effects of erva tostão in animals and humans. Research indicates that a root extract can increase urine output by as much as 100 percent in a twenty-four-hour period at dosages as low as 10 mg per kg of body weight.

The worldwide use of erva tostão for various liver complaints and disorders was validated in three separate studies. These indicated that a root extract provided beneficial effects in animals by protecting the liver from numerous introduced toxins and even repairing chemical-induced liver and kidney damage. In other clinical studies with animals, erva tostão extracts demonstrated smooth muscle and skeletal muscle stimulant activities in frogs and guinea pigs; anti-inflammatory actions in rats; hypotensive actions in dogs as well as in vitro hypotensive actions; antispasmodic actions in frogs and guinea pigs; analgesic activities in mice; and antiamebic actions in rats. In two studies with monkeys, a root extract was reported to reduce bleeding and uterine hemorrhaging commonly associated with wearing contraceptive IUDs. The traditional use of erva tostão for convulsions was verified by scientists in two studies, demonstrating that a root extract provided anticonvulsant actions in mice. In vitro testing of erva tostão confirmed its antibacterial properties against gonorrhea (another traditional use), as well as Bacillus, Pseudomonas, Salmonella and Staphylococcus. It was also shown to possess antiviral actions against several viral plant pathogens.

Many of these animal studies help to explain erva tostão’s long history of different uses in natural medicine. Clearly, it has played an important role in the herbal practitioner’s medicine chest of natural remedies for many maladies in both South America and India. It is an effective natural remedy, especially for the liver and kidneys, which is deserving of much more attention and use here in the United States. Several research groups studying various biological activities of erva tostão have shown the safety of the plant — indicating no toxicity of root and leaf extracts taken orally by mice at up to 5 g per kg of body weight. Another group of scientists studied the effects of erva tostão on pregnant rats and reported that it had no abortive effects and no embryotoxic or teratogenic (fetal death or birth defect) activity.

Cautions: It is contraindicated in some heart diseases; it has hypotensive (lowers blood pressure), cardiac depressant, and ACE-inhibitor effects.

Both in vivo and in vitro studies have demonstrated the hypotensive properties of erva tostão. Those with heart problems such as low blood pressure, or those taking medications to lower their blood pressure should not use this plant without the advice and supervision of a qualified health care practitioner as blood pressure levels should be monitored closely.

This herb has also demonstrated myocardial depressant activity and should therefore not be taken by anyone with heart failure or those taking heart depressant medications unless under the direction and care of a qualified health care practitioner.

Drug Interactions: Erva tostão may interfere with prescription diuretics and may potentiate cardiac depressant medications. Erva tostão has been documented in one in vitro study to have angiotensin-converting enzyme (ACE) inhibition action. Therefore, this plant may potentiate ACE inhibitor drugs for high blood pressure.

In one study, an oral dosage of 500 mg/kg (leaf extract) in mice inhibited barbiturates and decreased sleeping time. Therefore, the use of this plant may decrease the effect of barbiturates.

Sohni, Y., et al. “The antiamoebic effect of a crude drug formulation of herbal extracts against Entamoeba histolytica in vitro and in vivo.” J. Ethnopharmacol. 1995; 45(1): 43–52.

Hansen, K., et al. “In vitro screening of traditional medicines for anti-hypertensive effect based on inhibition of the angiotensin converting enzyme (ACE).” Ethnopharmacol. 1995; 48(1): 43–51.

Ingredients: 100% pure erva tostão (Boerhaavia diffusa) whole herb (root, stem, leaf). No binders, fillers or additives are used. It is a wild harvested product—grown naturally in the Brazilian Amazon without any pesticides or fertilizers.

Suggested Use: This plant is best prepared as a decoction. Use one teaspoon of powder for each cup of water. Bring to a boil and gently boil in a covered pot for 20 minutes. Allow to cool and settle for 10 minutes and strain warm liquid into a cup (leaving the settled powder in the bottom of the pan). It is traditionally taken in 1 cup amounts, 2-3 times daily. For more complete instructions on preparing herbal decoctions see the Methods for Preparing Herbal Remedies Page.

Animal studies have demonstrated the hypotensive properties of erva tostão. This plant is probably contraindicated for persons with low blood pressure.

This herb has also demonstrated myocardial depressant activity and should therefore not be taken by anyone with heart failure or those taking heart depressant medications unless under the direction and care of a qualified health care practitioner.

Drug Interactions: Erva tostão may enhance the actions of cardiac depressant medications. In an animal study erva tostão inhibited barbiturates and decreased sleeping time. Therefore, the use of this plant may decrease the effect of barbiturates.

Share and Enjoy:
Tagged with: a diuretic for all types of liver disorders including jaundice and hepatitis • and kidney disorders • and nephritis • Anemia • Cystitis • Digestive Aid • edema • gallbladder pain and stones • internal inflammation of all kinds • Jaundice • Kidney Stones • Laxative • liver gallbladder • menstrual problems • renal disorders • to stimulate the emptying of the gallbladder • Urinary Tract Disorders