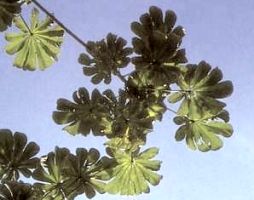 Embauba is native to Central and South America and the West Indies. It is a fast-growing, short-lived tree that springs up along riverbanks (where its seeds are deposited after annual flooding). It has large leaves (a foot wide) with a hollow stem, and bears a cylindrical fruit with soft, sweet flesh around many small seeds. The tree, growing 5-10 m tall, often is inhabited by stinging ants that are attracted to the honey-like sap produced by the leaves. The symbiotic relationship with the ants is thought to protect the tree from leaf-eating insects. There are many closely-related Cecropia species (including C. peltata, C. palmata, and C. obtusifolia) that may have different geographical locations yet all are very similar in appearance, chemical makeup, and traditional medicinal uses. Cecropia trees (nearly 100 tropical species in South and Latin America) are propagated by the many small fruit seeds they produce – bats, monkeys, and birds eat the succulent fruit and disperse the seeds in their droppings. Often, it can form dense stands of trees that choke the growth of other plants anywhere that the canopy is disturbed.

Indian tribes in the Amazon use embauba for its anti-inflammatory properties-typically for rheumatic, kidney and lung inflammations. The leaf is made into a tea and used widely for asthma and other upper respiratory complaints, as well as for diabetes. It also has been used for sores on the mouth and tongue. The Palikur indigenous people of Guyana wrap the large leaves around bone fractures, bruises and wounds, and use embauba to disinfect the genitalia and alleviate pain after childbirth.

In herbal medicine systems, embauba is used widely throughout Central and South America. In Brazil it is used for all types of respiratory complaints (such as asthma, bronchitis, coughs, whooping cough, and pneumonia). It is also used for diabetes, Parkinson’s disease, kidney disorders, high blood pressure, and to increase the contraction strength of the heart muscle. It is considered effective against Parkinson disease in Colombia, where it also is used as a substitute for digitalis-containing plants (for heart problems), and to facilitate childbirth and menstruation. The leaf is used in Guatemalan herbal medicine systems for asthma, edema, rheumatism, diabetes, fever, atherosclerosis, and gonorrhea. The plant is popular in Mexico, where it is used for diabetes, coughs, inflammation, diarrhea, bladder irritation, asthma, obesity, liver disorders, high blood pressure, and warts.

In Cuba, virtually every part of the plant is employed in herbal medicine. The latex is considered corrosive and astringent, and is used topically against warts, calluses, herpes (and other venereal diseases), and skin ulcers. The bark is used to reduce mucus; the roots for bile complaints; and the fruit is considered emollient (soothing and softening the skin). The leaves are considered to reduce pain, and are used for asthma, liver disorders, edema and to promote menstruation. In other parts of Latin America and the Amazon, it is often touted as a “cure” for asthma after only a few weeks of taking a tea brewed from its leaves. (This has not been confirmed with any clinical research, however).

Little research has been done to determine individual phytochemicals in embauba. In general, it is known to contain glycosides, lipids, alkaloids, flavonoids, tannins, cardenolids, triterpenes, polyphenols, steroids, and resins. A recent (2002) U.S. patent named ambain (a glycoside) and cecropin (an alkaloid) as the active plant chemicals in embauba that have cardiotonic and diuretic properties. The flavonoids and proanthocyanidins in embauba recently were reported to inhibit angiotensin-converting enzyme (ACE) in vitro. (ACE-inhibitors represent a class of pharmaceutical drugs used for hypertension which promote vasodilation and act as a diuretic.) The traditional use of embauba for high blood pressure might be explained if these chemicals can be demonstrated to inhibit ACE in humans and animals.

Preliminary research is just beginning to explain and verify some of embauba’s many uses in traditional medicine. Animal studies (with mice, rats, and guinea pigs) have shown that leaf extracts have pain-relieving, anti-inflammatory, and antispasmodic activities — which may explain, in part, its widespread traditional use in respiratory disorders. Cuban researchers, however, reported that leaf infusions did not evidence any bronchodilator activity (in guinea pigs. Other animal research has indicated that the plant can increase urination and lower blood pressure. One study reported that it increased urine flow in rats by 20 percent — without affecting the excretion of sodium and potassium. Two different research groups (in Costa Rica and Mexico) reported that leaf extracts reduced blood pressure in rats.

Another of embauba’s traditional uses has been for diabetes. This use also has been studied in animals and verified by researchers. Water extracts of the leaf given to mice and rats were shown to lower blood sugar levels in two studies; a hot water extract given to rabbits and dogs elicited the same blood sugar-lowering effect. One of these research groups attributed the hypoglycemic effect of the leaf, in part, to two flavone chemicals in embauba (isoorientin and chlorogenic acid) which, when tested individually, also demonstrated hypoglycemic activity in rats. Animal studies confirm the anti-inflammatory, pain-relieving, and antispasmodic properties of embauba.

Embauba has been reported to have in vitro antibacterial activity against various bacteria (such as Staphylococcus, E. coli, Pseudomonas, Salmonella, and Shigella). Water extracts seemed to have much more biological activity against bacteria than methanol or ethanol extracts in vitro. An ethanol extract of the leaf and stem was reported to have in vitro antifungal activity, but water extracts were inactive (which suggests that antibacterial actions are derived from different chemicals than those providing antifungal actions). Embauba has also shown antioxidant activity with potent free-radical scavenging action. In 2002 a U.S. patent was filed on various embauba extracts for use in cosmetics and dermatology. The patent reported the extracts had “pronounced action on lipolysis (fat-burning) which make them useful in slimming preparations, but also owing to their tightening effect, their smoothing properties and the improvement of the radiance of the skin.”

It is hoped that researchers will continue to study embauba and validate more of its traditional uses – in particular, its use in respiratory disorders such as asthma and bronchitis. In the meantime, healthcare practitioners and herbalists around the world are utilizing this plant for not only respiratory disorders, but also for its cardiotonic and hypotensive properties, antidiabetic activity, and for its (yet-to-be-studied) use in Parkinson’s disease. Generally, for upper respiratory problems and asthma; a standard leaf infusion is prepared and taken in 1 cup dosages 2-3 times daily. To help balance blood sugar levels, a cup of a leaf infusion is taken with each meal.

Cautions: It may increase the effect of diabetic and high blood pressure drugs.

Traditional Preparation: Traditionally, 1/2 to 1 cup of a standard leaf infusion is taken two to three times daily. If desired, 2-3 grams of powdered leaf in tablets or capsules twice daily can be substituted.

Embauba has a traditional use of aiding childbirth and to promote menstruation. It should not be taken during pregnancy.

The plant has been reported in animal studies to have cardiotonic properties, increasing the strength of cardiac muscle contraction. It should not be used by anyone with a cardiac disorder unless monitored by a medical doctor. Embauba also has demonstrated hypotensive activity in animal studies. Those with low blood pressure or those on medication to lower their blood pressure should seek the advice of a qualified healthcare professional prior to using this plant.

Embauba has demonstrated a hypoglycemic effect in animals. It is contraindicated for persons with hypoglycemia. Diabetics should use this plant with caution as blood sugar levels should be monitored closely.

Drug Interactions: None reported in literature; however, embauba may potentiate cardiotonics (such as digitalis) as well as antihypertensive and ACE-inhibitor drugs. It may potentiate anti-diabetic and insulin drugs.

Ingredients: 100% pure embauba leaves (Cecropia sp). No binders, fillers or additives are used. It is a wild harvested product—grown naturally in the Brazilian Amazon without any pesticides or fertilizers.

Suggested Use: This plant is best prepared as an infusion (tea): Use one teaspoon of powder for each cup of water. Pour boiling water over herb in cup and allow to steep 10 minutes. Strain tea (or allow settled powder to remain in the bottom of cup) and drink warm. It is traditionally taken in 1 cup amounts, 2-3 times daily. For more complete instructions on preparing herbal infusions, see the Methods for Preparing Herbal Remedies Page.

Not to be taken during pregnancy.

Embauba has demonstrated hypotensive activity in animal studies. It is probably contraindicated in persons with low blood pressure.

Embauba has demonstrated a hypoglycemic effect in animals and humans. It is contraindicated for persons with hypoglycemia. Diabetics should use this plant with caution as blood sugar levels should be monitored closely.

Drug Interactions: None reported in the literature; however, embauba may enhance the effect of blood pressure drugs and anti-diabetic drugs.

Share and Enjoy:
Tagged with: anti-inflammatory properties typically for rheumatic kidney and lung inflammations • as well as for diabetes • for asthma and other upper respiratory complaints