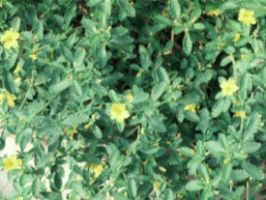 Damiana is a small shrub that grows 1-2 m high and bears aromatic, serrate leaves that are 10-25 cm long. Small yellow flowers bloom in early to late summer which are followed by small fruits with a sweet smell and fig-like flavor. The medicinal part of the plant is its leaves, which are harvested during the flowering season. Damiana is found throughout Mexico, Central America, and the West Indies, as well as in parts of South America. Turnera diffusa and T. aphrodisiaca are generally regarded as the same plant in herbal commerce. A closely-related species, T. ulmifolia, is similar in appearance, but it has different traditional medicinal uses. The botanical Latin name of the plant, Turnera aphrodisiaca, describes its ancient use as an aphrodisiac.

Damiana was recorded to be used as an aphrodisiac in the ancient Mayan civilization, as well as for “giddiness and loss of balance.” A Spanish missionary first reported that the Mexican Indians made a drink from the damiana leaves, added sugar, and drank it for its purported power to enhance lovemaking.

Damiana has a long history of use in traditional herbal medicine throughout the world. It is thought to act as an aphrodisiac, antidepressant, tonic, diuretic, cough-suppressant, and mild laxative. It has been used for such conditions as depression, anxiety, sexual inadequacy, debilitation, bed-wetting, menstrual irregularities, gastric ulcers, and constipation. In Mexico, the plant also is used for asthma, bronchitis, neurosis, diabetes, dysentery, dyspepsia, headaches, paralysis, nephrosis, spermatorrhea, stomachache, and syphilis. Damiana first was recorded with aphrodisiac effects in scientific literature over 100 years ago.

From 1888 to 1947 damiana leaf and damiana elixirs were listed in the National Formulary in the United States. For more than a century damiana’s use has been associated with improving sexual function in both males and females. Dr. James Balch reports in his book Prescription for Nutritional Healing that damiana “relieves headaches, controls bed-wetting, and stimulates muscular contractions of the intestinal tract. . . .” The leaves are used in Germany to relieve excess mental activity and nervous debility, and as a tonic for the hormonal and central nervous systems. E. F. Steinmetz states that in Holland, damiana is renowned for its sexual-enhancing qualities and its positive effects on the reproductive organs. The British Herbal Pharmacopoeia cites indications for the use of damiana for “anxiety neurosis with a predominant sexual factor, depression, nervous dyspepsia, atonic constipation, and coital inadequacy.”

Damiana’s chemical composition is complex and its components have not been identified completely. The leaves contain up to 1% volatile oil that is comprised of at least 20 constituents (including 1,8-cineole, p-cymene, alpha- and beta-pinene, thymol, alpha-copaene, and calamene). Damiana leaves also contain tannins, flavonoids, beta-sitosterol, damianin (a brown, bitter substance), and the glycosides gonzalitosin, arbutin, and tetraphyllin B. Damiana has been reported to be non-toxic in humans and animals.

Only one clinical study has been conducted to validate the traditional use of the plant for sexual dysfunction and impotence. In 1999, a group of researchers in Italy administered damiana to both sexually potent and sexually sluggish (or impotent) rats. The extract had no effect on sexually potent rats but, in the others, it increased the percentage of rats achieving ejaculation and made them more sexually active. A U.S. patent was awarded in 2002 for a combination of herbs, including damiana, to “overcome natural inhibitors of human sexual response and allow for improved response and psychological effects.” Another U.S. patent was awarded for an herbal combination for females, with inventors reporting that damiana could “. . . relieve anxiety, depression, headaches during menstruation, and exhaustion. Damiana also helps to balance female hormone levels and control hot flashes.” A 1998 in vitro clinical study reported that components in damiana bound to progesterone receptors in cultured human breast cancer cells, leading researchers to surmise that it had a neutral or anti-estrogenic activity.

Central nervous system depressant activity has been attributed to damiana and verified by research. Damiana also has been used in combination with other plants for its thermogenic activity. Two U.S. patents have been filed on oral appetite suppressants containing damiana, citing its inclusion as an anti-anxiety and thermogenic substance.

Damiana’s traditional use for diabetes has been studied by scientists as well. In 1984, Mexican researchers reported the hypoglycemic activity of the plant when a leaf infusion was given to diabetic mice. This effect was re-verified in Mexico when the plant was prepared in the traditional manner (as an infusion) and given orally to hyperglycemic rats. This study reported that damiana reduced blood glucose levels as well. A more recent (2002) study however, reported that an ethanol extract of damiana evidenced no hypoglycemic activity. These conflicting studies suggest that the active “hypoglycemic” chemicals in damiana may be extracted in the traditional (hot water) process, and are lost or not extracted in alcohol.

With such an ancient history of traditional uses worldwide, it’s not unusual that the plant appears in many books on herbal remedies published world wide. Damiana is also widely available in most health food and natural product stores in a variety of forms – from tea blends, capsules and tablets to liquid tinctures and extracts. Most herbalists prefer to use damiana in combination with other medicinal plants; therefore, it can be found in quite a few herbal combination formulas for sexual potency, weight loss, depression, hormonal balancing, and overall tonics. Most of the damiana sold in herbal commerce today originates from Mexican and Latin American cultivation projects.

Cautions: May reduce the absorption of iron.

Traditional Preparation: The traditional remedy calls for 2-4 g of dried leaves infused in a cup of boiling water; 2-3 cups are taken daily. Alternatively, 2-4 ml of a liquid extract or 3-4 grams of powdered leaf in tablets or capsules taken twice daily can be substituted if desired.

Damiana has demonstrated mild hypoglycemic effects in animals. Persons with diabetes and hypoglycemia should use this plant with caution, as blood sugar levels should be monitored accordingly for this possible effect.

Damiana has a traditional use as an abortive and is contraindicated during pregnancy.

Drug Interactions: None reported, however, it might potentiate antidiabetic medications.

7. “Almost all cultural traditions in the world have favourite herbs that have the reputation of increasing libido and of reversing impotence. For one of them, Damiana, such a reputation was even carried into its botanical name, Turnera aphrodisiaca. Actions: Nerve tonic, anti-depressant, urinary antiseptic, laxative. Indications: Damiana is an excellent strengthening remedy for the nervous system. It has an ancient reputation as an aphrodisiac. Whilst this may or may not be true, it has a definite tonic action on the central nervous and the hormonal system. The pharmacology of the plant suggests that the alkaloids could have a testosterone-like action (testosterone is a male hormone). As a useful anti-depressant, Damiana is considered to be a specific in cases of anxiety and depression where there is a sexual factor. It may be used to strengthen the male sexual system.”

15. “Mexican damiana is classed as aphrodisiac, stimulant, tonic, and diuretic. The herb has been scientifically accepted in Mexico as a reliable remedy for exhaustion, catarrhal inflammation of the bladder, and cases of sexual impotence especially when caused by excesses. It is also used for orchitis (inflammation of a testicle) and spermatorrhea (involuntary emissions). The plant is said to exert a favorable influence on the spinal column, and some Mexican physicians employ it as a brain tonic. It is also prescribed in nephritis (kidney inflammation).

In England and Germany, damiana is used for its aphrodisiac properties. In Holland, medical herbalist Steinmetz states that the herb is so esteemed not only for its sexual enhancing qualities, but also for “its excellent effect on the reproductive organs.”

Unproven Uses: Damiana preparations are used as an aphrodisiac and for prophylaxis and treatment of sexual disorders.

No health or side effects are known in conjunction with the proper administration of designated therapeutic dosages.

“Actions: Nerve tonic, anti-depressant, urinary antiseptic, laxative. Indications: Damiana is an excellent strengthening remedy for the nervous system. It has an ancient reputation as an aphrodisiac. Whilst this mayor may not be true, it has a definite tonic action on the central nervous andthe hormonal system. As a useful anti-depressant, Damiana is considered to be aspecific in cases of anxiety and depression where there is a sexual factor. It may be used to strengthen the male sexual system.

Ellingwood describes this herb thus: (please note that the language is that of Ellingwood, reflecting the time it was written) “A mild nerve tonic claimed to be valuable in the treatment of sexual impotence. Some of our physicians praise it highly for its influence in sexual neurasthenia, and it is said to correct frigidity in the female. It had long enjoyed a local reputation as a stimulant tonic of the sexual apparatus among the natives of Mexico, before it attracted the attention of the profession. Besides its peculiar action on the sexual appetite and function, it is a general tonic, some what cathartic and is slightly cholagogue. The midwives and women of loose morals of western Mexico also attribute emmenagogue properties to it.

“Dr. Reid uses Damiana in all conditions where a general tonic is needed, especially if there be enfeeblement of the central nervous system. He esteems it most highly, prescribing it constantly for this purpose. It is valuable in renal and cystic catarrh and in general irritation of the urinary passages, through its influence in soothing irritation of mucous membranes. This latter property renders it valuable in the treatment of respiratory disorders, especially those accompanied with profuse secretion. “In terms of the action of this remedy in its influence upon the reproductive organs, Dr. Reid mentions dysmenorrhea, headache, at the menstrual epoch, bad complexion, rough or discolored patches on the skin with acne, especially of asevere type, depending upon uterine irritation. Eruption resembling eczema, from insufficient menstruation. Dr. Watkins gives as its further indications, delayed or suppressed menstruation in young girls, irregularity at the beginning of menstruation, amenorrhoea in very young girls. It will certainly allay sensitiveness of the sympathetic nervous system to irritations caused by disorders of the womb and ovaries. The remedy must be given in full doses, to accomplish these results. From 5 to 10 grains of the extract is necessary 3 or 4 times a day, and persisted in.”

Ingredients: 100% pure damiana leaves (Turnera aphrodisiaca). No binders, fillers or additives are used. It is a wild harvested product—grown naturally in the Brazilian Amazon without any pesticides or fertilizers.

Suggested Use: This plant is best prepared as an infusion (tea): Use one teaspoon of powder for each cup of water. Pour boiling water over herb in cup and allow to steep 10 minutes. Strain tea (or allow settled powder to remain in the bottom of cup) and drink warm. It is traditionally taken in 1 cup amounts, 2-3 times daily. For more complete instructions on preparing herbal infusions, see the Methods for Preparing Herbal Remedies Page.

Not to be used while pregnant.

Animal studies suggest that damiana has hypoglycemic actions. People with low blood sugar should be monitored more closely for this possible effect.

Drug Interactions: Damiana might enhance the action of antidiabetic drugs.