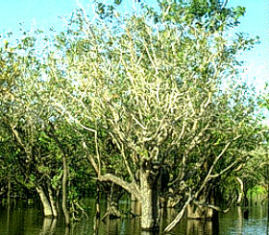 Cumaseba is a tropical rainforest tree that grows up to 15 meters high. It can be found in lower elevations throughout the Amazon basin area in Brazil, Peru, Colombia, Venezuela and the three Guianas (Guyana, French Guiana, & Suiname). It has olive-green lanceolate leaves, produces small white flowers, and a smooth, brown seed pod with 2 large seeds inside.

The Swartzia family comprises approximately 133 species of mostly trees, many of which are native only to the Amazon rainforest.

In the Amazon, the bark and/or wood of the cumaseba tree is employed as a postpartum tonic, for rheumatism, and to speed the healing of bone fractures and dislocations. The Tirio Indians in Suriname prepare the bark in a decoction for malaria. The Shipibo-Conibo Indians in the Peruvian Amazon use the bark as an antiseptic, and use the tree resin dropped into the eyes for eye infections, failing eyesight and for optic nerve injuries. Other tribes in the Amazon believe that the tree bark gives strength and prevents laziness. It is also used to strengthen the body during illness and to speed healing.

In Peruvian herbal medicine systems cumaseba bark is considered an aphrodisiac and tonic; it is recommended for yeast infections, colds and flu, rheumatism, for female disorders and as a postpartum tonic.

Cumaseba is rich is flavonoids and isoflavones. It contains a significant amount of an isoflavone chemical called biochanin A which has been well studied and documented (over 150 studies published to date). Biochanin A is a chemical referred to as a “phytoestrogen” which is found in other plants like red clover (the richest source of biochanin A documented thus far). Phytoestrogens are molecules that closely resemble human hormones (estrogen and/or progesterone) and that may exert some type of estrogenic activity by interacting with estrogen receptor sites in the human body (called Selective Estrogen Receptor Modulators or SERMs). SERMs are reported with anticancer effects (especially to hormone-driven breast and prostate cancers). While there is research that is conflicting, generally biochanin A has been documented with SERM actions, the ability to lower PSA levels in prostate cancer cells, cancer-preventative actions, and direct anti-tumor and cytotoxic actions against colon, breast and prostate cancer cell lines.

Scientists have confirmed through in vitro testing that cumaseba is a good antimicrobial. It has been reported to kill Mycobacterium tuberculosis, including several antibiotic-resistant strains, the stomach bacteria linked to ulcers and stomach cancer, H. pylori, several types of mouth bacteria that cause cavities and gingivitis, and other gram-positive strains of bacteria. Cumaseba has also been documented to have actions against fungus and candida. Most of these researchers have attributed the antimicrobial actions of cumaseba to its isoflavone chemicals.

A Brazilian research group screening plants against cancer reported that cumaseba bark was toxic to colon and lung cancer cell lines in vitro but the action was not very strong. Another research group identifying a new isoflavone in cumaseba reported that an ethanol extract of the heartwood (as well as the new chemical they discovered) was able to inhibit Protein Kinase C (PKC). PKC inhibitors have attracted a great deal of scientific interest worldwide, as there is evidence that too much PKC enzyme is involved in a wide variety of disease processes including arthritis, asthma, brain tumors, cancer, and cardiovascular disease.

Cumaseba’s documented antimicrobial activity does support the plant’s traditional uses for colds and as an antiseptic. Its use as a female tonic, postpartum tonic and aphrodisiac is probably related to the phytoestrogen chemicals that are documented as major constituents in cumaseba. Scientists have yet to confirm why the plant is so widely used for rheumatism and other painful and inflamed joint, muscle and bone problems. It continues to be a popular remedy in Peru but American consumers know very little about cumaseba. Only a few companies offer it in the U.S.

Traditional Preparation: Cumaseba bark is traditionally prepared in the Amazon in alcohol tinctures. When it is used externally (for fractures and dislocations), sometimes it is prepared in a decoction and the affected part of the body is soaked in the warm decoction. See Traditional Herbal Remedies Preparation Methods page if necessary for definitions.

This is a genus of about 125 species of tropical American and African unarmed shrubs and small or large trees, rarely lianas. The centre of speciation is the Amazon. The genus contains a number of chemical compounds with potential medicinal or toxic properties: triterpene glycosides (Jewers, 1971), pterocarpanoids (Harper, 1969), anthraquinones (Formiga, 1975), lignans (Braz Filho, 1980), flavone glycosides (Bezauger-Beauquesne, 1967) and isoflavones (Harborne, 1975). In view of the sparsity of reports of medicinal and toxic applications of Swartizia in South America, the mention of several species in the native pharmacopoeias of the northwest Amazon assumes an unusual importance. The major uses of Swartzia center on the excellent quality of the wood of a number of species.

Ingredients: 100% pure cumaseba bark (Swartzia polyphylla). No binders, fillers or additives are used. This plant is non-irradiated and non-fumigated, and has grown naturally in Peruvian Amazon without pesticides or fertilizers.

Suggested Use: Cumaseba is best prepared as an alcohol tincture. Combine 1 part bark powder with 4 parts 90 proof alcohol (everclear or vodka). Allow to macerate for 2 weeks while agitating solution daily. Strain into a clean bottle and seal. It is traditionally taken in dosages of 2-4 ml (60-120 drops) twice daily or as needed. Can also be used externally by applying to the skin twice daily and letting dry completely. For more complete instructions on preparing herbal tinctures see the Methods for Preparing Herbal Remedies Page.

Share and Enjoy:
Tagged with: a powerful diuretic • For rheumatism • Malaria • postpartum tonic • To speed the healing of bone fractures and dislocations