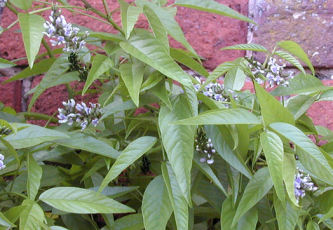 Culen is a deciduous shrubby bush found in the warmer humid valleys of the mid Andes Mountains in Peru, Chile, and Bolivia. It grows 3 to 5 m in height and has a trunk that is around 25 cm in diameter. Culen produces aromatic leaves that are about 2-5 cm long and small yellow to cream flowers on bracts.

Culen belongs to the Otholobium genus, although for many years it was classified in the Psoralea genus. In fact most of the literature published prior to the early 1990s refers to culen as Psoralea glandulosa. The plant is thought to originate in Chile, but it has been cultivated as a medicinal plant for many years all along the Andes Mountains. It can be found growing wild alongside the roads in the Junin District in Peru.

Culen is used in Bolivia as an emmenagogue with the leaves brewed into a tea to balance menstrual cycles and for various female complaints. In Brazil, the leaf tea (infusion) is considered to be antiasthmatic, antidiabetic, diaphoretic, emollient and vulnerary. In herbal medicine systems in Chile culen is used as an as an anti-inflammatory, anthelmintic, appetitive, bronchodilator, carminative, diaphoretic, emetic, emollient, febrifuge, purgative, stomachic, and vulnerary. It is often relied on for enteritis, digestive disorders, hemorrhoids, intestinal worms, skin problems, syphilis, and wounds.

Culen was introduced into the United States in the late 1800s. It appeared in several early pharmaceutical texts and journals in the 1890s where it was reported with anthelmintic, emetic, tonic and vulnerary actions and recommended for for anorexia, debility, diarrhea, dyspepsia, fatigue, intestinal worms, and wounds.

Culen contains two well known furanocoumarin chemicals called psoralen and angelicin. These chemicals have long been documented with UV light-induced photosensitizing activity and have been used in various drugs for the photodynamic destruction of tumor cells and in other skin diseases like psoriasis and vitiligo. In addition, angelicin has been documented with anti-inflammatory and fever-reducing actions and has shown some promise in the possible treatment of sickle-cell anemia. Another main constituent in culen is a well known chemical called bakuchiol. Many of culen’s traditional uses can be explained by the documented properties and actions researched and verified for this particular chemical found in culen. Bakuchiol has been documented with liver-protecting, cholesterol-lowering, fever-reducing, anti-inflammatory, antioxidant, antimutagenic, and anticancerous actions in various animal and test tube studies. In addition, bakuchiol has been reported with broad-spectrum antimicrobial actions against numerous types of bacteria, mycobacteria, fungus, and viruses.

Much of the research on culen follows closely with the reported actions of the plant’s main active constituents. In animal testing culen was reported with fever-reducing actions as well as anti-inflammatory, and anti-tumor actions. In test tube studies, culen has demonstrated antibacterial, and antiviral actions.

Toxicity studies with animals indicate that culen leaves are non-toxic when administered orally. One research group gave mice up to 12 grams per kilogram of body weight without any noted toxicity.

With culen’s documented antiviral actions against influenza and well as its fever reducing and bronchodilator actions, it makes a great natural cold and flu remedy. It is also well used in South America as a digestive tonic for many types of digestive disorders. The aromatic leaves makes a tasty, refreshing, and cooling tea or beverage to settle the stomach, and relieve gas and indigestion. Culen has also long been used for intestinal worms and parasites.

While culen is popular in the Andean regions of South America, it is not very well known here in the U.S. Only a few products are available in the American natural products market.

Cautions: May cause photosensitivity in high dosages.

Traditional Preparation: Natural fresh or dried culen leaves are traditionally prepared in infusions. A handful of products in capsules or liquid extracts can be found in South American stores and pharmacies to provide easier use by consumers. See Traditional Herbal Remedies Preparation Methods page if necessary for definitions.

Contraindications: Culen contains furanocoumarin chemicals which might cause photosensitivity in some people.

Bondarenko, A., et al. “Antimicrobial and antiviral activity of essential oil from Psoralea drupacea and its activity.” Rast. Resur. 1974; 583.

Ingredients: 100% pure culen leaves(Otholobium glandulosum). No binders, fillers or additives are used. This plant is non-irradiated and non-fumigated, and has grown naturally in Peru without pesticides or fertilizers.

Suggested Use: This plant is best prepared as an infusion (tea): Use one teaspoon of powder for each cup of water. Pour boiling water over herb in cup and allow to steep 10 minutes. Strain tea (or allow settled powder to remain in the bottom of cup) and drink warm. It is traditionally taken in 1 cup dosages, 2-3 times daily. For more complete instructions on preparing herbal infusions see the Methods for Preparing Herbal Remedies Page.

Contraindications: Culen contains furanocoumarin chemicals which might cause photosensitivity in some people.