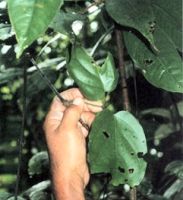 Clavo huasca is a large, woody vine that grows up to 80 m in length and is indigenous to the Amazon rainforest and other parts of tropical South America. It produces very small, white flowers (which are pollinated by bees and butterflies) and elongated, flat, bean-like fruits. The vine bark and root has a distinctive, clove-like aroma (as do the leaves, somewhat), earning its common name clove vine or white clove. The vine, when cross-sectioned, has a distinctive “Maltese cross” design in the wood (with a darker, reddish color as the background and a golden color in the heartwood). Two species of plants are sold in herbal commerce as “clavo huasca” – the true Tynanthus vine, and another, completely different, Mandevilla genus vine.

The Shipibo-Conibo, Kayapó, and Assurini Indian tribes in the Amazon rainforest regard clavo huasca highly as an impotency remedy, for weak erections, and as an effective aphrodisiac for both men and women. It is also used as an adjunctive ingredient in various ayahuasca recipes (or taken shortly after taking the concoction) to settle the stomach. Ayahuasca is a phytochemically-rich combination of plants brewed by Indian shamans to connect to the spirit world. Through a series of reactions among chemicals from several plants working together, a hallucinogenic plant extract is created. While clavo huasca is not itself a hallucinogen, the ayahuasca brew also can be quite purgative-causing vomiting and diarrhea. Clavo huasca is sometimes added to the brew or taken simultaneously to help reduce these effects.

Clavo huasca is also widely regarded as an aphrodisiac for both men and women in Peruvian herbal medicine today. It is an ingredient in two famous herbal formulas for impotency and frigidity which are sold widely in the herbal markets and stores in Peru as aphrodisiacs and for sexual potency. One is called Siete Raices (“seven roots”) and the other is Rompe Calzon (“bust your britches”). In addition, this vine tincture is also employed for fever, aching muscles and arthritis pain in Peruvian herbal medicine. The fresh sap or resin from the root of the plant is used as a toothache remedy-containing a chemical called eugenol which acts as a topical pain-reliever. As an aphrodisiac, clavo huasca is traditionally prepared by macerating the vine bark and wood in alcohol, or most commonly, the local sugar cane rum called aguardiente. In Brazilian herbal medicine, the plant is called cipó cravo; it is considered an excellent remedy for dyspepsia, difficult digestion, and intestinal gas (when brewed as a water decoction) and an aphrodisiac (when macerated in alcohol into a tincture).

Preliminary phytochemical analysis by Brazilian scientists have discovered an alkaloid they named tinantina as well as tannic acids, eugenol, and other essential oils.

Despite its long and popular use in South America, there are no published clinical studies as yet on clavo huasca.

Clavo huasca is still widely employed as a natural aphrodisiac for both men and women in South America today. It’s reported to be highly effective, especially for pre-menopausal women (but not as effective for libido loss after menopause). This use has caught on here in the U.S., and more clavo huasca products are now available in natural product stores. It is also showing up as an ingredient in various herbal libido formulas for men and women as well. For its aphrodisiac qualities, its best prepared in its time-honored traditional method: as an alcohol tincture.

Traditional Preparation: As a libido-aid, 3-4 ml of a 4:1 tincture is taken twice daily. As a digestive aid and appetite stimulant, 1 cup of a vine wood or leaf infusion is prepared. See instructions for Herbal Preparation Methods if necessary.

The pieces of roots and stems are macerated in aguardiente to make a stimulant liqueur, good for rheumatism (RVM). Resin used for fevers (DAT). Some explorama visitors have used it, effectively, for toothache, being as effective as, and probably chemically similar to clove oil (JAD). Some visitors believe, others disbelieve, that the rays of the cross, steeped in aguardiente, are aphrodisiac, some for females, some for males, some for both. We have no incontrovertible empirical evidence, one way or the other.

“Clavohuasca (Tynnanthus panurensis) is an aromatic vine that is often found climbing to the forest canopy in Amazonian Peru, where I lead my Rainforest Pharmacy Workshops. One traveler in my first Physician’s Workshop, an acclaimed herbalist himself, says he has empirical evidence that tincture of clavohuasca, a rather pleasant and warming liquer, sexually exites both the male and female of the human species – namely him and his wife.”

Ethnobotany of the Peruvian Amazon. http://www.biopark.org/Plants-Amazon.html

“Clavo huasca is a forest liana vine in the same botanical family as the legendary ayahuasca. The name means ‘clovevine’ (‘clavo’ = ‘clove’ or ‘nail'; ‘huasca’ = ‘vine’) and refers to the rich clove-like scent of the trunk and leaves. Sections of the trunk and stems are macerated in aguardiente (sugar cane liquor), producing a drink said to be an aphrodisiac and an effective treatment for fever and rheumatism. It contains the clove-scented chemical eugenol, which soothes toothache. It is a fundamental component of the famed Amazonian tonics siete raices (seven roots)and veinti uno raices (twenty-one roots). Clavo huasca is comonly sold in the Belén medicinal market in Iquitos, Perú.”

This viny cousin of ayahuasca produces no hallucinations and is good for rheumatism and arthritis when cuttings from the stem are steeped in aguardiente. Also, the root has anaesthetic properties good for tooth pain when sap is squeezed onto the tooth.”

Ingredients: 100% pure clavo huasca vine (Tynanthus panurensis). No binders, fillers or additives are used. This product is non-irradiated and non-fumigated. It is a wild harvested product—grown naturally in the Peruvian Amazon without any pesticides or fertilizers.

Suggested Use: The active chemicals in this plant are not very water soluble. It is best prepared as an alcohol tincture. Combine 1 part powder with 4 parts 90 proof alcohol (everclear or vodka). Allow to macerate for 2 weeks while agitating solution daily. Strain into a clean bottle and seal. It is traditionally taken in dosages of 2-3 ml (60 to 90 drops) 2-3 times daily. For more complete instructions on preparing herbal tinctures, see the Methods for Preparing Herbal Remedies Page.

Other Observations: Some women have reported becoming too sexually aggressive on clavo huasca with continued daily use. If this occurs reduce usage to 2-3 times weekly.