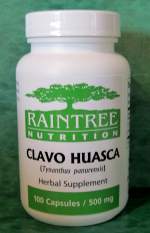 In Peruvian herbal medicine, Clavo huasca (Tynanthus panurensis) is widely regarded as an libido booster for both men and women.

It is an ingredient in two famous formulas for which are widely sold in the herbal markets and stores in Peru for sexual potency; one called Siete raices (Seven Roots) and the other is Rompe Calzon (Bust your Britches).

Clavo huasca is traditionally prepared by macerating the vine bark and wood in alcohol or most commonly, the local sugar cane rum called aguardiente.

Clavo huasca is in the clove family and the name Clavo huasca means “Clove Vine” due to this vine’s distinctive clove scent and flavor. For more information about this vine, check out the Plant Database File on Clavo huasca.

It is highly concentrated with the equivalent of 500 mg of Clavo huasca vine in 1 milliliter of extract (30 drops). It is rich in active and beneficial phytochemicals which occur naturally in this plant and is unconditionally guaranteed.

Clavo huasca extract was featured in an HSI article on the female libido.

Traditional Uses: As a female aphrodisiac for pre-menopausal women; for muscle pain and aches; as a digestive aid to calm the stomach, increase appetite, and expel intestinal gas; as a male aphrodisiac and for erectile function; as a general tonic (tones, balances, strengthens overall body functions)

Contraindications: Not to be used during pregnancy or while breast feeding.

Other Observations: Some women have reported becoming too sexually aggressive on clavo huasca with continued daily use. If this occurs reduce usage to 2-3 times weekly.

The extract is blended with 40% alcohol to stabilize and preserve the active ingredients and much as it has been prepared traditionally for hundreds of years. Generally 60 drops (2 dropperfuls) are recommended as an average serving size.

See the Plant Database File on it.

Raintree Nutritions work and testing with the plant indicates that Clavo huasca is a much better aphrodisac for women rather than men. In testing with over 100 women, beneficial results were reported within only a few days with a noticeable rise in desire and libido.

In fact, many of the test subjects decided that taking the extract on a daily basis was too much libido and preferred taking it only when needed or wanted.

To see what other women say about Clavo Huasca, please go to the Testimonial section.

Amazon Passion Oil On women, the scent can be sensuous, sweet to spicy. While on men, the aroma can be strong – yet subtle and is more cedar-like to peppery.

Amazon Passion Oil On women, the scent can be sensuous, sweet to spicy. While on men, the aroma can be strong – yet subtle and is more cedar-like to peppery.

Catuaba For a lowered libido in both men and women.

In tests quick, beneficial results were reported, with a noticeable rise in desire and libido.