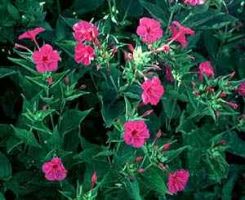 Clavillia is a perennial herb that reaches a height of 50-100 cm from a tuberous root. Some cultivated hybrid species also can grow up to a meter in height. It produces beautiful flowers that usually open around 4 o’clock in the afternoon-hence its common name, four o’clocks. It is a popular ornamental plant grown worldwide for the beauty of its flowers (which can be white, red, pink, purple, or multicolored) and their sweet fragrance. It was officially botanically recorded in 1753 although it already had long been distributed as an ornamental plant throughout the tropics of the world. There is some disagreement about where it came from originally: Mexico, Chile, or India. Today, clavillia is naturalized throughout the tropics of South America, Latin America, France, and India. In Brazil the plant is known as clavillia, maravilha, or bonina; in Peru it is known as jalapa or maravilla. Hybrids of clavillia can be found in nurseries throughout the U.S. where they are sold as ornamental landscape plants.

The indigenous people of the Amazon enjoy the beauty of clavillia’s flowers as much as city dwellers, and often plant it in their gardens. They employ the plant medicinally as well. Indigenous Peruvian people use a root decoction as a diuretic; the Shipibo-Conibo Indians put the flowers in baths to treat colds and flu. In Brazil, the Kayapo Indians inhale the powdered, dried flowers as a snuff for headaches, and use a root decoction to wash wounds and to treat such skin afflictions as leprosy. The Assuraní Indians in Brazil crush the seeds to use as a peppery condiment on foods, and grate the tuberous root into cold water and drink it for intestinal parasites. The tribal people of Orissa, India grind the roots of the plant into a paste with black pepper and take it orally for conjunctivitis. They also apply the juice of the leaves to fungal infections of the skin.

These indigenous practices impelled clavillia’s presence in herbal medicine systems around the world. In Peru, the plant and/or tuber is used as a diuretic, laxative, and bowel cleanser. The juice of the flower is used to clear herpes lesions and for earaches. In Brazilian herbal medicine, a paste is made of the leaf and flower and applied to affections of the skin such as itchiness, eczema, herpes, skin spots, and skin infections. The juice of the root is dropped into the ear for earaches. Brazilians also use the root to combat worms, intestinal parasites, leucorrhea, edema, diarrhea, dysentery, abdominal colic, syphilis, and liver affections. In Mexico, the entire plant is decocted and used for dysentery, vaginal discharge, infected wounds, and bee and scorpion stings. In the United States, the plant is used for mumps, bone fractures, and as an uterine stimulant to hasten childbirth.

Chemical analysis of clavillia shows that it is rich in many active compounds including triterpenes, proteins, flavonoids, alkaloids, and steroids. Of particular interest to researchers is a group of amino acid-based proteins, called mirabilis antiviral proteins (MAPs). These chemicals have shown specific antiviral and antifungal actions. They are produced in the seeds, roots, and young shoots, and help the plant protect against various plant viruses and soil-borne fungi. In 1994, a Japanese tobacco company was awarded a U.S. patent on the MAPs in clavillia as being effective in protecting economically-important crops (such as tobacco, corn, and potatoes) from a large variety of plant viruses (such as tobacco mosaic virus, spotted leaf virus and root rot virus). Researchers in Hong Kong isolated another MAP in the roots of clavillia with the same antiviral actions, and also noted, “The MAP demonstrated to possess abortifacient [abortion-causing] activity in pregnant mice, inhibitory effects on cell-free protein synthesis, and antiproliferative effects on tumor cells.” The MAPs found in clavillia have shown to inhibit cellular processes in viral cells.

The highest concentration of MAPs are found in the seeds of the plant, followed by the roots, then leaves. The seeds, however, are a significant source of other peptide chemicals with actions similar to the neurotoxic peptides found in spider venom. These peptides are in the same classification as (and act similarly to) another plant-derived toxic peptide, ricin (now being employed as a biological weapon). As compared with ricin, though, clavillia’s peptides are only about 1/30th as toxic. Because of this toxicity, though, the seeds are not generally used in herbal medicine systems (despite researchers’ documentation of the significant antimicrobial actions attributed to them).

The plant and root have demonstrated other biological activities in addition to the antiviral actions of the MAPs. In 2001, researchers found new phenolic compounds in clavillia which demonstrated in vitro action against the yeast Candida albicans. A hot water extract of the flower, leaf, and root of clavillia has shown antifungal activity in another in vitro study. Other research on the leaf and branches of clavillia did not confirm any antimicrobial actions, therefore, these properties are probably attributed only to the root of the plant. In early research, the root of the plant (in water and ethanol extracts) also demonstrated mild uterine stimulant actions in rats, and antispasmodic actions in guinea pigs.

Clavillia, the lovely, sweet-smelling ornamental, has also earned its place in herbal medicine practices around the world; its array of biological activities continue to support its use worldwide for viruses, fungi and yeast. As most research surrounding this plant’s activity has occurred in the past ten years, more findings regarding clavillia’s power and versatility will likely explain more of its indigenous uses and unearth new applications for it. Today, clavillia is generally employed as an antiviral herbal remedy for herpes, hepatitis, influenza and other upper respiratory viruses as well as for candida and yeast infections.

Cautions: Do not use during pregnancy.

Traditional Preparation: For viruses and candida generally one-half cup of a standard root infusion or 1-2 ml of a 4:1 tincture is taken twice daily. 1 gram of powdered root in capsules or tablets twice daily can be substituted if desired.

The seeds of the plant contain neurotoxic chemicals and should not be ingested.

Chemicals found in clavillia have been documented to have abortive actions. Clavillia itself has been documented with a mild uterine stimulant effect, therefore; its use during pregnancy is not advised.

Caceres, A., et al. “Plants used in Guatemala for the treatment of dermatophytic infections. Screening for antimycotic activity of 44 plant extracts.” J. Ethnophamacol. 1991; 31(3): 263–76.

Caceres, A., et al. “Screening of antimicrobial activity of plants popularly used in Guatemala for the treatment of dermatomucosal diseases.” J. Ethnopharmacol. 1987; 20(3): 223–37.

Ingredients: 100% pure clavillia (Mirabilis jalapa) whole herb (root, stem, leaves). No binders, fillers or additives are used. This plant is non-irradiated and non-fumigated, and has grown naturally in the Amazon without pesticides or fertilizers.

Suggested Use:This plant is best prepared as an infusion (tea): Use one teaspoon of powder for each cup of water. Pour boiling water over herb in cup and allow to steep 10 minutes. Strain tea (or allow settled powder to remain in the bottom of cup) and drink warm. It is traditionally taken in 1/2 cup dosages, twice daily. For more complete instructions on preparing herbal infusions see the Methods for Preparing Herbal Remedies Page.

The seeds of the plant contain neurotoxic chemicals and should not be ingested.

Chemicals found in clavillia have been documented to have abortive actions. Clavillia itself has been documented with a mild uterine stimulant effect, therefore; its use during pregnancy is contraindicated.