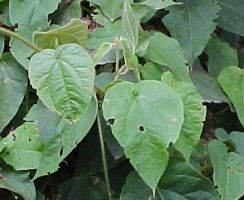 Cipó cabeludo is a very small, shrubby vine that grows only 13–18 cm tall and produces small, white flowers. A member of the Mikania genus (which comprises over 300 neotropical species of climbing vines), it is indigenous to many parts of Brazil, including the Amazon region. It is also indigenous to Bolivia, Colombia, Costa Rica, Ecuador, French Guiana, Guyana, Honduras, Panama, Paraguay, Peru, Suriname, and Venezuela. In Brazil its common name is cipó cabeludo or guaco-cabeludo. It sometimes is confused with other Mikania vines that grow in the same regions—Mikania guaco or M. cordifolia—whose common name is “guaco” (which is also featured in this book).

Cipó cabeludo is widely used in Brazilian herbal medicine and highly regarded as a powerful diuretic. Its main documented uses there are for cystitis, prostatitis, urethritis, gout, urinary tract infections, excessive mucus, gallstones, kidney stones, and to help lower uric acid levels in the urine and blood. It is a preferred natural remedy for nephritis and prostatitis and is considered helpful in removing excessive mucous from the urinary and bronchial tracts. It also is employed as an pain-reliever for neuralgia, chronic rheumatism and arthritis, and general muscle pain.

Chemical screening has revealed that cipó cabeludo contains coumarin, sesquiterpenes, flavonols, saponins, and kaurenoic acid derivatives. These acid derivatives are chemicals that have been documented with various biological activities. Several of the known kaurenoic acids in cipó cabeludo (and other Mikania species) have demonstrated in vitro antibacterial properties against Gram-negative and Gram-positive bacteria in published research. Cipó cabeludo (and other Mikania plants) contain the natural plant chemical coumarin. Coumadin (an anticoagulant prescription drug with blood-thinning effects) is derived and/or synthesized from this natural plant chemical. The main chemicals in this vine include coumarin, essential oils, flavonols, flavones, kaurenoic acid diterpenes, resins, saponins, and tannins.

This particular species of Mikania was described by a Brazilian researcher at the University of São Paulo in the early 1970s. In the mid-eighties, other Brazilian researchers documented that an extract of cipó cabeludo had powerful molluscicidal effects (it had a lethal effect against adult snails) at only 10 ppm concentration. This type of test generally is conducted on plants in the ongoing search for new products to treat the common and highly problematic tropical disease, schistosomiasis. More recently, cipó cabeludo has interested a research group in Japan. Their first study (in 1999) reported the discovery of two novel sesquiterpene chemicals as well as nine other known compounds. They tested eleven of the isolated compounds against leukemia cells in vitro and reported that four of them “showed relatively strong cytotoxicity.” Their second (2000) study reported that cipó cabeludo contained five biologically-active kaurenoic acids (which also occur in other Mikania species) as well as a novel one-which they named mikanialactone.

Little research has been conducted thus far on cipó cabeludo; virtually none of its longstanding traditional uses have been confirmed by animal studies. Its use for various urinary infections may be related to the documented antimicrobial kaurenoic acid derivative chemicals found in the vine but, again, these effects haven’t been confirmed in animals or humans. One rat study was recorded in 2002 that tested the anti-inflammatory effects of several Mikania species (some guaco species are known for their anti-inflammatory properties). While they noted no anti-inflammatory effect for cipó cabeludo, they reported there were no signs of toxicity in rats at a dosage of 400 mg per kg of body weight with a standard leaf decoction.

Today, cipó cabeludo is mainly used in various products and formulas in Brazil for kidney problems and prostatitis. It is not widely known or used outside of Brazil and very few products are available in the U.S. market.

Cautions: Contains coumarin and might thin the blood and/or increase the effect of coumadin drugs.

Cipó cabeludo is used in herbal medicine as a diuretic. While these effects have not been confirmed scientifically, use of this plant may be contraindicated in various medical conditions where diuretics are not appropriate. Chronic long-term use of any diuretic can cause electrolyte and mineral imbalances as well as other medical problems and are generally not recommended; therefore, it is probably best to avoid chronic use of this plant.

While not substantiated scientifically, it is possible that cipó cabeludo may demonstrate an blood thinning effect due to its coumarin content. Consult your doctor before using this plant if you are taking coumadin drugs (or if coumadin anticoagulant-type drugs are contraindicated for your condition).

The above text has been pprinted from The Healing Power of Rainforest Herbs by Leslie Taylor, copyrighted © 2005 All rights reserved. No part of this document may be reproduced or transmitted in any form or by any means, electronic or mechanical, including photocopying, recording, or by any information storage or retrieval system, including websites, without written permission.

Ingredients: 100% pure cipó cabeludo leaves (Mikania hirsutissima). No binders, fillers or additives are used. It is a wild harvested product—grown naturally in the Brazilian Amazon without any pesticides or fertilizers.

Suggested Use: This plant is best prepared as an infusion (tea): Use one teaspoon of powder for each cup of water. Pour boiling water over herb in cup and allow to steep 10 minutes. Strain tea (or allow settled powder to remain in the bottom of cup) and drink warm. It is traditionally taken in 1/2 cup amounts, twice daily. For more complete instructions on preparing herbal infusions, see the Methods for Preparing Herbal Remedies Page.

Contraindications: While not substantiated scientifically, it is possible that cipó cabeludo may demonstrate an blood thinning effect due to its coumarin content. Consult your doctor before using this plant if you are taking coumadin drugs (or if coumadin anticoagulant-type drugs are contraindicated for your condition).

Drug Interactions: Might enhance the action of anticoagulant drugs.