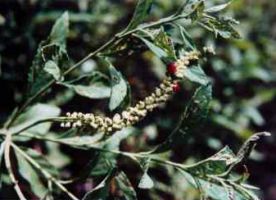 Chá de bugre is a small tree growing 8-12 meters in height with a trunk 30-40 cm in diameter. It is indigenous to Brazil and can be found growing predominately in the Brazilian states of Minas Gerais, Bahia, Acre and Goias. It is also found in tropical forest areas of Argentina and Paraguay. In Brazil, the tree is botanically classified as Cordia salicifolia and in Paraguay the same tree is classified as Cordia ecalyculata. In Brazil, it is commonly called café do mato (coffee of the woods) because it produces a red fruit resembling a coffee bean which is roasted and brewed into tea as a coffee substitute.

Chá de bugre products are highly commercialized as a weight loss aid in Brazil where tea bags, fluid extracts and tinctures of chá de bugre are commonly seen in pharmacies, stores, and even in the beach-front eateries and refreshment stands along Rio de Janeiro’s beaches (where bikinis rule!). It has long been a popular weight loss product which has been marketed as a diuretic, appetite suppressant, and believed to help prevent or reduce fatty deposits and cellulite. Several years ago an enterprising Brazilian company re-launched a chá de bugre weight loss product calling it by its Indian name, porangaba and market demand in Brazil has been fierce ever since. Dr. C.L. Cruz in his book, Dictionary of the Plants Used in Brazil, recommends chá de bugre as an excellent diuretic and weight loss aid as well as a good general heart tonic which can help stimulate circulation. It is also used in Brazil and Haiti as a tea to help relieve coughs, regulate renal function, reduce uric acid and externally to heal wounds.

Despite the popularity of chá de bugre in Brazil very little has been done to analyze the phytochemicals in the plant. At present it is known to contain caffeine, potassium, allantoin and allantoic acid. The red fruits or berries of chá de bugre (resembling a coffee bean) contain caffeine. The allantoin and allantoic acid may explain the traditional use of the plant for wound healing. Main plant chemicals include allantoin, allantoic acid, caffeine, potassium.

Since chá de bugre is a commonly sold and popular natural product already, very little clinical research or interest has been shown to study the plant in Brazil. A Japanese university however has discovered some new uses for chá de bugre. In 1990, they demonstrated that a leaf extract reduced herpes virus penetration by 99% when they pre-treated cells with the extract. In 1994, they demonstrated that the Herpes virus yield was reduced by 33% with as little as 0.25 mcg/ml and also discovered that it had toxic activity against cancer cells (demonstrating a 40% inhibition) utilizing an extract of the branches and leaves. Then in 1997, research with rabbits and guinea pigs validated the traditional use of the plant as a heart tonic when they reported cardiotonic and increased cardiovascular actions using a leaf extract.

CURRENT PRACTICAL APPLICATIONSOne certainly sees less cellulite on Rio’s beaches than most American beaches, however, this phenomenon is probably not attributed to just chá de bugre! Whether it is called chá de bugre or porangaba, it will probably long be sold as a natural weight loss aid in Rio and throughout Brazil. It is a great appetite suppressant – but rather than cutting off appetite all together (then causing intense hunger when it wears off at the wrong time) it gives one a sense of being full and satiated after eating only a few bites of food. This seems to promote much smaller meals, more often, which is what many practitioners believe is better for sustained weight loss and keeping the metabolism going throughout the day. It works best if taken 30 minutes to one hour prior to a meal. Chá de bugre is not widely available in the U.S. market today, but give it some time . . . these types of natural weight loss aids are just as popular (and profitable) here as they are in South America – especially if they work.

Traditional Remedy: One cup of a leaf infusion 2-3 times daily thirty minutes before meals, or 2-3 ml of a 4:1 leaf tincture twice daily. 2 to 3 grams of powdered leaf in tablets or capsules 1-3 times daily can be substituted if desired.

Ingredients: 100% pure chá de bugre (Cordia salicifolia) whole herb. No binders, fillers or additives are used. This product is non-irradiated and non-fumigated. It is a wild harvested product—grown naturally in the Brazilian Amazon without any pesticides or fertilizers.

Suggested Use: This plant is best prepared as an infusion (tea). Use one teaspoon of powder for each cup of water. Pour boiling water over herb in cup and allow to steep 10 minutes. Strain tea (or allow settled powder to remain in the bottom of cup) and drink warm. It is traditionally taken in 1 cup amounts, ½ to 1 hour before meals. For more complete instructions on preparing herbal infusions see the Methods for Preparing Herbal Remedies Page.