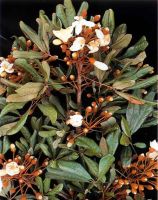 Erythroxylum catuaba is a vigorous-growing, small tree that produces yellow and orange flowers and small, dark yellow, oval-shaped, inedible fruit. It grows in the northern part of Brazil in Amazonas, Para, Pernambuco, Bahia, Maranhao, and Alagoas. This catuaba tree belongs to the family Erythroxylaceae, whose principal genus, Erythroxylum, contains several species that are sources of cocaine. Catuaba, however, contains none of the active cocaine alkaloids.

A large amount of confusion exists today regarding the actual species of tree that is harvested in Brazilian forests and sold around the world as “catuaba.” Experienced Brazilian harvesters will refer to two species: a “big catuaba” and a “small catuaba.” The confusion thickens when relating these trees to approved botanical species names. “Small catuaba” is Erythroxylum catuaba (A. J. Silva ex. Raym.-Hamet – the name was accepted in 1936), which grows 2-4 m tall and sports yellow-to-orange flowers and, in Brazil, is referred to as catuaba. “Big catuaba,” in the mahogany family, is Trichilia catigua (A. Juss.), which grows 6-10 m tall, has cream-colored flowers and – in Brazil – is referred to as catiguá and angelim-rosa. Moreover, three other (unapproved) botanical names for catuaba are used incorrectly in herbal commerce today: Juniperus brasiliensis (which is thought to refer to “small catuaba”), and Anemopaegma mirandum and Eriotheca candolleana, which are completely different species altogether. Anemopaegma is a huge tree in the Bignonia family, growing to 40 m tall and called catuaba-verdadeira in Brazil. This species of tree is now harvested and exported out of Brazil by inexperienced or unethical harvestors (resulting in the incorporation in herbal products sold in the U.S. today) as just “catuaba.” Erythroxylum catuaba and Trichilia catigua are the preferred Brazilian herbal medicine species, with the longest documented history of use as “big and little catuaba.” Both types are used interchangeably in Brazilian herbal medicine systems for the same conditions.

Catuaba has a long history of use in herbal medicine as an aphrodisiac. The Tupi Indians in Brazil first discovered the aphrodisiac qualities of the plant and over the last few centuries they have composed many songs praising its wonders and abilities. Indigenous and local peoples have used catuaba for generations. It is the most famous of all Brazilian aphrodisiac plants. In the Brazilian state of Minas there is a saying, “Until a father reaches 60, the son is his; after that, the son is catuaba’s!”

In Brazilian herbal medicine today, catuaba is considered a central nervous system stimulant with aphrodisiac properties. A bark decoction is commonly used for sexual impotency, agitation, nervousness, nerve pain and weakness, poor memory or forgetfulness, and sexual weakness. According to Dr. Meira Penna, catuaba “functions as a stimulant of the nervous system, above all when one deals with functional impotence of the male genital organs . . . it is an innocent aphrodisiac, used without any ill effects at all.” In Brazil it is regarded as an aphrodisiac with “proven efficacy” and, in addition to treating impotence, it is employed for many types of nervous conditions including insomnia, hypochondria, and pain related to the central nervous system (such as sciatica and neuralgia). In European herbal medicine catuaba is considered an aphrodisiac and a brain and nerve stimulant. A bark tea is used for sexual weakness, impotence, nervous debility, and exhaustion. Herbalists and health practitioners in the United States use catuaba in much the same way: as a tonic for genital function, as a central nervous system stimulant, for sexual impotence, general exhaustion and fatigue, insomnia related to hypertension, agitation, and poor memory. According to Michael van Straten, noted British author and researcher of medicinal plants, catuaba is beneficial to men and women as an aphrodisiac, but “it is in the area of male impotence that the most striking results have been reported” and “there is no evidence of side effects, even after long-term use.”

The chemical constituents found in catuaba include alkaloids, tannins, aromatic oils and fatty resins, phytosterols, cyclolignans, sequiterpenes, and flavonoids. One Brazilian researcher documented (in 1958) that catuaba contained the alkaloid yohimbine (but it was unclear which species of tree he was studying). A mixture of flavalignans, including cinchonain (also found in quinine bark), was isolated from the bark of Trichilia catigua and reported to have antibacterial and anticancerous properties.

Clinical studies on catuaba also have shown results related to its antibacterial and antiviral properties. A 1992 study indicated that an extract of catuaba (Erythoxlyum catuaba) was effective in protecting mice from lethal infections of Escherichia coli and Staphlococcus aureus, in addition to inhibiting HIV significantly. The study found that the pathway of catuaba’s anti-HIV activity stemmed (at least partially) from the inhibition of HIV absorption into cells, and suggested that catuaba had potential against opportunistic infections in HIV patients. A U.S. patent was granted (in 2002) to a group of Brazilian researchers for a catuaba bark extract (Trichilia catigua). Its patent refers to animal studies it conducted that reported that it relieved pain and relaxed and dilated blood vessels in rats, rabbits and guinea pigs. A study published in 1997 reported that catuaba bark had significant pain relieving activity in vivo.

CURRENT PRACTICAL USESTo date, no toxicity studies have been done on catuaba – but its long history of use in Brazil has reported no toxicity or ill effects. In fact, according to Dr. Meira Penna, the only side-effects are beneficial – erotic dreams and increased sexual desire! While no clinical research has validated the traditional use of catuaba as an aphrodisiac, it continues to be used widely for its ability to enhance sexual drive and increase libido in both men and women. In the last several years, its popularity has grown in the North American herbal market, with various products (especially libido formulas) now available in health food stores. Catuaba is also showing up in other formulas for depression, stress and nervous disorders. (The jury’s still out as to which species is being sold, however!) Interested consumers should seek a reputable manufacturer and product – with a verified plant source and botanical species for the herbal ingredient being sold.

The above text has been quoted from The Healing Power of Rainforest Herbs by Leslie Taylor, copyrighted © 2005

1. “This nervous system fortifier and male libido enhancer has resulted in the Tupi Indians of Brazil praising its wonders in many songs. Historical uses include its use as a male aphrodisiac and a tonic to the male organs. It is also used for male impotency. It is a strong tonic and fortifier of the nervous system, capable of giving strength to people with general fatigue. It helps eliminate restless sleep and insomnia from hypertension, and has been known to help failing memories.”

2. “Catuaba is excellent for the male reproductive organs. It can increase circulation and libido. It is famous as a stimulant to the nervous system and brain. It can be used in cases of impotence.”

Science on these plants is still modest, but reports in scientific journals and at conferences have supported their use for sexual enhancement. In catuaba, a group of three alkaloids dubbed catuabine A, B and C are believed to enhance sexual function by stimulating the nervous system. In muirapuama, chemists have identified a group of sterols including beta-sitosterol, thought to be responsible for the herb’s aphrodisiac effects. In one study using muirapuama, 51 percent of men with erectile problems reported improvement, and 62 percent experienced an increase in libido.

After our time in Manaus, Bernie and I boated down the Amazon river where we stayed with Ipixuna and Crinicoru indians in floating shacks on the water. While there we ventured into the rain forest with native guides who showed us catuaba and muirapuama trees growing in different places. We also witnessed the harvesting of catuaba bark and its subsequent sale to a local buyer. We learned that most natives use these plants by placing a small handful of their combined barks in a glass of room-temperature water, let the herbs sit overnight, and drink the resulting amber infusion in the morning.

To confirm what we had read about catuaba and muirapuama, and what Antonio Matas had imparted, Bernie and I set off to interview a couple of elderly women shamans, both of whom were experts in the preparation and use of Amazon medicinal plants. Each woman told us that the sexual restorative virtues of catuaba and muirapuama were significant. One 89-year-old shaman named Therese echoed Antonio’s words when she told us, “Catuaba and muirapuama together can make people sexually young again.”

Throughout history, people have sought to increase libido and improve sexual function through the use of reputed aphrodisiac plants. Catuaba and muirapuama, two common trees growing widely across the Amazon river basin, enjoy centuries of safe, effective use as bona fide aphrodisiacs. “

ngredients: 100% pure catuaba bark (Erythroxylum catuaba). No binders, fillers or additives are used. This product is non-irradiated and non-fumigated. It is a wild harvested product—grown naturally in the Brazilian Amazon without any pesticides or fertilizers.

Suggested Use: This plant is best prepared as an infusion (tea): Use one teaspoon of powder for each cup of water. Pour boiling water over herb in cup and allow to steep 10 minutes. Strain tea (or allow settled powder to remain in the bottom of cup) and drink warm. It is traditionally taken in ½ to 1 cup dosages, 2-3 times daily. For more complete instructions on preparing herbal infusions see the Methods for Preparing Herbal Remedies Page.

Share and Enjoy:
Tagged with: an aphrodisiac and libido stimulant for males and females • balances • Emotional Stress • for nervousness • for poor memory Alzheimer's disease and dementia • over stimulation • strengthens overall body functions) • to tone balance and calm the central nervous system and for nerve pain & exhaustion