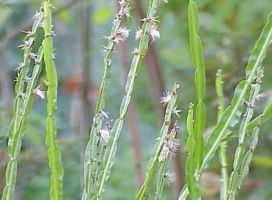 Carqueja is a perennial green herb that grows nearly vertical to a height of 1–2 meters and produces yellowish-white flowers at the top of the plant. The bright green, flat, winged stalks have a fleshy, succulent consistency and the “wings” take the place of leaves. The Baccharis genus is composed of more than 400 species native to tropical and subtropical America. Carqueja is known by several botanical names in Brazil, including Baccharis genistelloides, B. triptera, and B. trimera. It is found throughout the Amazon rainforest in Peru, Brazil, and Colombia, as well as in tropical parts of Argentina, Paraguay, and Uruguay. Other common species called carqueja in Brazil include Baccharis trinervis and B. gaudichaudiana which look similar (smaller in height and smaller wings) and are sometimes used as substitutes for B. genistelloides. Another well known species in the family is a small shrub, B. cordifolia, which is toxic to grazing animals.

Indigenous peoples of the rainforest have utilized this herb for centuries to cure common ailments. Its uses in herbal medicine were first recorded in Brazil in 1931 by Pio Correa, who wrote about an infusion of carqueja being used for sterility in women and impotency in men. Correa described carqueja as having the therapeutic properties of a tonic, bitter, febrifuge, and stomachic, with cited uses for dyspepsia, gastroenteritis, liver diseases, and diarrhea. Since that time, carqueja has long been used in Brazilian medicine to treat liver diseases, to strengthen stomach and intestinal function, and to help purge obstructions of the liver and gallbladder. Almost every book published in Brazil on herbal medicine includes carqueja, since it has shown to be so effective for liver and digestive disorders as well as a good blood cleanser and fever reducer. Other popular uses for carqueja in Brazilian herbal medicine today are to treat malaria, diabetes, stomach ulcers, sore throat and tonsillitis, angina, anemia, diarrhea, indigestion, hydropsy, urinary inflammation, kidney disorders, intestinal worms, leprosy, and poor blood circulation.

In Peruvian herbal medicine today, carqueja is used for liver ailments, gallstones, diabetes, allergies, gout, intestinal gas and bloating, and venereal diseases. Herbalists and natural health practitioners in the United States are just learning of the many effective uses of carqueja. They document that it helps strengthen digestive, ileocecal valve, stomach, and liver functions; fortifies and cleanses the blood; expels intestinal worms; is helpful for poor digestion, liver disorders, anemia, or loss of blood; and removes obstructions in the gallbladder and liver.

Carqueja is a rich source of flavonoids. Certain flavonoids, such as silymarin in milk thistle, have shown liver-protective properties and are used for many liver conditions in herbal medicine systems. Carqueja is rather like the South American version of milk thistle. It contains up to 20% flavonoids, including quercetin, luteolin, nepetin, apigenin, and hispidulin. The flavonoids are considered carqueja’s main active constituents. Several novel plant chemicals called clerodane diterpenoids have been identified in carqueja and, in 1994, scientists showed that these chemicals had maximum effects against worms. This could possibly explain carqueja’s long history of use as an agent to expel intestinal worms.

Other traditional uses of carqueja have been studied and validated by research. Its antacid, antiulcer, and hypotensive properties were documented in two Brazilian animal studies in 1992. Its antiulcer and pain-relieving properties were reported in a 1991 clinical study that showed that carqueja reduced gastric secretions and had an analgesic effect in rats with H. pylori ulcers. That study concluded that carqueja “may relieve gastrointestinal disorders by reducing acid secretion and gastrointestinal hyperactivity.” A later study, in 2000, confirmed its antiulcerogenic effect when a water extract of carqueja administered to rats protected them from alcohol-induced ulcers. Other researchers documented carqueja’s pain-relieving effects. This same research group in Spain also reported a strong anti-inflammatory effect – a 70%-90% inhibition-when mice were treated with the carqueja extract prior to being treated with various chemicals that induced inflammation.

Carqueja has also long been used in South America as a natural aid for diabetes, and several studies confirm its blood sugar-lowering effect in mice, rats, and humans (in both normal and diabetic subjects).

Finally, carqueja’s traditional use for colds, flu, and stomach viruses has also been verified by research. Some of the more recent research has focused on its antiviral properties. In a clinical study published in 1999, researchers in Spain reported that a water extract of carqueja showed in vitro antiviral actions against Herpes simplex I and Vesicular stomatitis viruses at low dosages. Researchers in Texas had already reported in 1996 that a water extract of carqueja provided an in vitro inhibition of HIV virus replication in T-cells. In subsequent research, they’ve attributed this anti-HIV effect to a single chemical they found in the water extract of carqueja- 3,5-dicaffeoylquinic acid-and reported that this plant chemical is a potent inhibitor of HIV at dosages as low as only 1 mcg/ml.

Carqueja is one of the more widely known and used medicinal plants in Brazil and other parts of South America. It is as popular in Brazil as a natural herbal liver aid and digestive aid as milk thistle is in the United States and Europe. Many of its traditional uses have been verified by research, and it appears in the official pharmacopeias of several South American countries as a specific liver and digestive aid. Carrqueja is considered safe and non-toxic. Toxicity studies with rats indicated no toxic effects when various leaf/stem extracts were given at up to 2 g/kg in body weight.

Herbalists and natural health practitioners in the United States are just learning of the many effective uses of carqueja. They document that it helps strengthen digestive, ileocecal valve, stomach, and liver functions; fortifies, cleanses and detoxifies the blood and the liver; expels intestinal worms; is helpful for poor digestion, liver disorders, anemia, or loss of blood; and removes obstructions in the gallbladder and liver.

Cautions: It has hypotensive (lowers blood pressure) and hypoglycemic actions. It should not be used during pregnancy.

Traditional Preparation: Traditionally, 2 g in capsules or tablets or 2-4 ml of a standard tincture are taken with each meal as a digestive aid or liver remedy. Alternatively, a standard infusion is prepared with 5 g (about a teaspoon) of dried herb to 4-6 ounces water and infused for 10 minutes. This traditional remedy is usually taken two or three times daily with meals as a digestive aid. For topical use (pain and inflammation), 60 g of herb (about 2 ounces) is decocted in 1 liter of water and applied to the affected area.

Carqueja should not be used during pregnancy, as it has demonstrated uterine stimulant and abortive effects in rats.

The use of this plant is contraindicated in persons with low blood pressure due to its documented hypotensive effects. Persons with any heart condition or taking heart medications should check with their physician prior to using this plant.

Carqueja has been documented to lower blood glucose levels in human and animal studies. As such, it is contraindicated in persons with hypoglycemia, and people with diabetes should check with their doctor prior to using this plant, and use with caution while monitoring their blood sugar levels accordingly.

Drug Interactions: Carqueja may potentiate the effects of antihypertensive drugs and insulin and anti-diabetic drugs.

1. “Carqueja helps maintain healthy functioning of the ileocecal valve. It is used for poor digestion and stomach pain. Research has also found that it has anthelmintic properties (against worms). Carqueja is used for hepatic dysfunctions, effectively removing liver obstructions. Carqueja is good in cases of anemia or loss of blood and is known for its blood-fortifying properties.”2. “Carqueja can be used to strengthen stomach and intestinal function. It helps purge obstructions of the liver and gallbladder. It helps strengthen digestion and the ileocecal valve and fortifies the blood. It can also support and tonify the nervous system and increases stomach yin.”

Oliveira, A. C., et al. “Effect of the extracts and fractions of Baccharis trimera and Syzygium cumini on glycaemia of diabetic and non-diabetic mice.” J. Ethnopharmacol. 2005 Dec; 102(3): 465-9.

Ingredients: Pure 100% carqueja (Baccharis genistelloides) whole herb (stem, leaves, flowers). No binders, fillers or additives are used. It is a wild harvested product—grown naturally in the Brazilian Amazon without any pesticides or fertilizers.

Suggested Use: This plant is best prepared as an infusion (tea): Use one teaspoon of powder for each cup of water. Pour boiling water over herb in cup and allow to steep 10 minutes. Strain tea (or allow settled powder to remain in the bottom of cup) and drink warm. It is traditionally taken in 1/2 cup dosages, 2-3 times daily. For more complete instructions on preparing herbal infusions, see the Methods for Preparing Herbal Remedies Page.

Not to be used during pregnancy as carqueja has demonstrated uterine stimulant and abortive effects in rats.

The use of this plant is contraindicated in persons with low blood pressure due to its documented hypotensive effects.

Carqueja has been documented to lower blood glucose levels in human and animal studies. As such, it is contraindicated in persons with hypoglycemia. Diabetics should monitor their blood sugar levels more closely if they use carqueja.

Drug Interactions: None reported, however, it may increase the effect of diabetic and antihypertensive drugs.