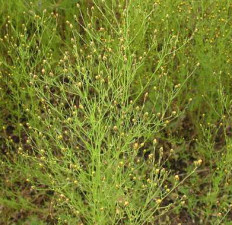 Canchalagua is a weedy annual herb that grows to about 70 cm high. It produces numerous small yellow flowers on numerous airy erect stems which grow more woody as it matures. Canchalagua is native to South America and is usually found in drier mountainous regions at around 2000 to 3000 meters in elevation. It is found abundantly in the inter-Andean valleys of Peru. Canchalagua has been introduced into and cultivated in other countries and can be found in Latin America, Mexico, Africa, and even in parts of southern Arizona and Texas where it has escaped cultivation and flourished as an annual weed.

Canchalagua is the Peruvian name given to this plant by the Ketchwa indigenous people of the Andes. They have long used this plant as an effective blood cleanser. Usually the entire plant is uprooted and chopped up and brewed into an infusion (fresh plant) or a decoction (dried plant) for this local remedy. Many types of skin problems, including eczema, dermatitis, and acne, are believed to cause by toxins and partially digested bacteria circulating in the bloodstream, and this canchalagua herbal remedy is used as a natural remedy for those types of skin conditions as well.

In Peruvian herbal medicine systems canchalgua is regarded as an anti-inflammatory, digestive, antitussive (stops coughing), capillary tonic, diuretic, and hypoglycemic. It is employed as an herbal remedy there for kidney, liver, and renal problems, malaria, diabetes, allergies, yeast infections, prostate inflammation, digestive disorders and intestinal gas, rheumatism, and various skin conditions such as acne, dermatitis, and eczema. When taken internally it is thought to help regulate hormones and skin oil content for juvenile acne and is also used in a topical application for blackheads, pimples and acne. It is also considered a good diuretic and used for various kidney and renal disorders including urinary tract infections and kidney pain. It is also often relied on as a soothing tea to ease nausea and stomachaches, and as a general digestive aid.

In herbal medicine systems in Argentina the plant is considered a natural antibiotic remedy and typically used for urinary tract infections, respiratory tract infections, diarrhea, and as an antiseptic wash for wounds. In Kenya, the plant is mostly regarded as a digestive aid and used for various digestive complaints and stomachaches. In several South and Latin American countries canchalagua is dried and reduced to a powder and is used in the house to repel or kill fleas and lice.

The naturalization of canchalagua into North America and its use as a medicinal plant was quite a few years ago—it was included in the Materia Medica of the New Mexican Phamacopeia which was printed in the American Journal of Pharmacy in 1885. There, it was called by it’s Mexican name, anisillo cimmaron, and attributed with antispasmodic actions.

Canchalagua contains germacranolides, heliangolides, sesquiterpene lactones, flavonoids, and sulfur compounds. The plant’s anti-inflammatory reputation might be attributed to a sesquiterpene found in canchalagua named costunolide which has been documented to inhibit NF-kappaB (a chemical involved in the inflammatory process in the body). Costunolide was also documented to suppress nitric oxide production which is recognized as a mediator and regulator of inflammatory responses. This chemical was also shown in rat studies to lower blood sugar levels and cholesterol levels and to be toxic to certain cancer cells. Canchalgua’s long standing reputation in the United States as an antispasmodic might be related to a chemical called pectolinarigenin which has been reported with antispasmodic and anti-inflammatory actions.

Canchalagua’s traditional use as an antimicrobial remedy against various infections is beginning to be validated thru various test tube studies. It was shown to be active against several fungus, yeast and mold strains and using the entire plant rather than just the leaves yielded much better activity. Its actions against bacteria has been mixed, but in the tests reported, they were mostly working with just leaves and not the entire plant. The leaf was shown to be active against Bacillus, but inactive against the other bacterial strains it was tested against.

Canchalgua has also been used in several countries as a traditional remedy for malaria. In a laboratory study with rats conducted in 2000, researchers in Bolivia reported that an ethanol extract of the entire plant did evidence antimalarial actions in animals.

By far, the most popular use for canchalgua in Peru is for its blood cleansing effect and as a digestive remedy. It is a highly regarded and respected herbal remedy for these purposes. Since circulating blood toxins are associated in a variety of skin problems, it is commonly relied on for both juvenile and adult acne, dermatitis and eczema. It is taken internally as well as used topically for these common skin issues. When used topically, it is thought to enhance capillary circulation to the skin as well. While canchalagua is well known in Peru, U.S. consumers know very little about this effective medicinal plant. As more natural body and facial care products enter the growing natural skin care market here, look for canchalagua making an appearance as a new ingredient used for natural therapeutic skin products.

Traditional Preparation: When the entire plant is prepared as a natural remedy, typically a decoction method is used. When just the leaves, and/or flowers are used, an infusion method is usually preferred. The decoctions and infusions are used both internally as well as topically for various skin issues. See Traditional Herbal Remedies Preparation Methods page if necessary for definitions.

Ingredients: 100% pure canchalagua (Schkuhria pinnata) whole herb (leaves, stem, flowers). No binders, fillers or additives are used. This is a wild harvested plant—grown naturally in Peru without any pesticides or fertilizers.

Suggested Use: This plant is best prepared as an infusion (tea): Use one teaspoon of powder for each cup of water. Pour boiling water over herb in cup and allow to steep 10 minutes. Strain tea (or allow settled powder to remain in the bottom of cup) and drink warm. It is traditionally taken in 1 cup dosages, 2-3 times daily. For more complete instrutions on preparing tinctures see the Methods for Preparing Herbal Remedies Page.

Share and Enjoy:
Tagged with: anti-malarial • cleanses blood • heals wounds • reduces acne • reknowned for its blood cleansing effect and as a digestive remedy