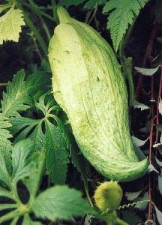 Caigua is a slender tropical vine that is indigenous to South America. It grows up to 40 feet in length with long tendrils for climbing. The leaves are 4-5 inches wide and divided into several lobes. It produces a pale green, semi-flattened fruit resembling a cucumber that is 4-6 inches long and 2-3 inches wide. Unlike a cucumber, the inside of the ripe fruit is hollow (much like a bell-pepper), with several black seeds attached to a placenta. In South America the fruits are eaten much like bell peppers – either raw or cooked (after the seeds are removed). They are also prepared as stuffed peppers; stuffed with meat, fish or cheese and then baked – earning it’s name “stuffing cucumber.” Caigua is currently cultivated as a food in the Carribean, Central and South America. It has been introduced into Florida where it is called “wild cucumber” and is considered a weed pest in lawns and gardens.

There are about 30 species of Cyclanthera that are native to warm-temperate and tropical America. Caigua can stand more cold than many others and it can be found growing prolifically in mountainous valleys in South America up to 2,000 m in elevation. The plant is known in Peru by its Spanish name caigua or caihua. Its indigenous Quechua name is achocha or achoccha.

In herbal medicine systems in Peru, a tea from the fruit seeds is used for controlling high blood pressure. The seeds are also dried and crushed and taken in 1 gram doses for intestinal parasites. The seeds and/or the fruits are also recommended for gastrointestinal disorders. The leaves of caigua are considered hypoglycemic and prepared in a decoction for diabetes. The fruits are boiled in milk and gargled for tonsilitis. The fruit juice is also recommended for high cholesterol, hypertension, tonsilitis, arteriosclerosis, circulatory problems, diabetes and as a diuretic. The fruit and/or the leaves are boiled in olive oil and used externally as a topical anti-inflammatory and analgesic. The roots are used to clean the teeth.

Caigua seeds contain 28-30 amino acids as well as a group of trypsin inhibitors. The leaves of the plant were recently reported to contain two new malonyl derivatives. The fruits are known to contain flavonoid glycosides including four novel ones never reported before that have shown an antioxidant effect in laboratory research. In addition, the fruits have yielded nine triterpenoid saponins, among them six new natural compounds never seen before.5 The seeds have been reported with six new cucurbitacin glycosides

Research conducted in Peru has reported that caigua can lower cholesterol levels in humans. A double-blind placebo study with 60 patients over one year reported that 82% of the patients lowered their LDL cholesterol by an average of 18.3% by reducing HDL by 23% and raising HDL-levels by 42%. Patients were given either a placebo, or 4 or 6 300 mg capsules daily of dehydrated fruit juice. Another study with 29 patients reported similar results in 10 days with total cholesterol dropping by 21.1% (HDL decreased by 63.55% and triglycerides by 36.37%). These subjects were given 100 cc daily of fruit juice (the equivalent of about 6 fresh fruits). Another study with 17 patients reported an average drop in cholesterol of 21.51% after 21 days taking two (300 mg dehydrated fruit juice) capsules daily (LDL decreased by 22.57% and triglycerides by 16.33%). In a 12-week study with postmenopausal women taking 6 (300 mg) capsules of caigua dehydrated fruit juice, they reported women lowered LDL cholesterol by 33% and increased HDL by 33%. There were no drug interactions, contraindications or side effects reported in any of the studies.

Caigua products have been gaining in popularity and availability in the U.S. natural products market over the last several years. Most are marketing these supplements as a cholesterol management aid, for hypertension, and blood-sugar regulation. Most of the available products in the United States are tablets or capsules of the dried or freeze-dried fruit juice.

Traditional Preparation: In Peru, the fresh fruits are typically put into a blender and juiced. The juice is taken in 1/4 to 1/2 cup amounts twice daily. The fruits are also simply eaten as a vegetable, either fresh or cooked. For manufactured juice powder products in capsules or tablets, follow the label instructions.

Ingredients: 100% pure caigua fruit powder (Cyclanthera pedata). No binders, fillers or additives are used. This is a wild harvested plant—grown naturally in the Peruvian Amazon without fertilisers

Suggested Use: This natural fruit juice powder can simply be stirred into juice or water, added to smoothies or other drinks, prepared into tea (an infusion), or stuffed into capsules. The suggested use is 1 teaspoon 2-3 times daily. For more complete instrutions on preparing herbal infusions see the Methods for Preparing Herbal Remedies Page.

Share and Enjoy:
Tagged with: Arteriosclerosis • circulatory problems • diabetes and as a diuretic. • For high cholesterol • hypertension • tonsilitis