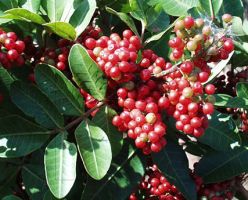 Brazilian peppertree is a shrubby tree with narrow, spiky leaves. It grows 4 to 10 m tall, with a trunk 25 to 35 cm in diameter. It produces an abundance of small flowers formed in panicles that bear a great many small, flesh-colored, berry-like fruits in December and January. It is indigenous to South and Central America and can also be found in semitropical and tropical regions of the United States and Africa. In both North and South America, three different trees – Schinus molle, Schinus aroeira, and Schinus terebinthifolius – are all interchangeably called “peppertrees.”

All parts of the tree have high oil and essential oil contents that produce a spicy, aromatic scent. The leaves of the Brazilian peppertree have such high oil content that leaf pieces jerk and twist when placed in hot water as the oil is released. The berries, which have a peppery flavor, are used in syrups, vinegar, and beverages in Peru; are added to Chilean wines; and are dried and ground up for a pepper substitute in the tropics. The dried berries have also been used as an adulterant of black pepper in some countries.

Virtually all parts of this tropical tree, including its leaves, bark, fruit, seeds, resin, and oleoresin (or balsam) have been used medicinally by indigenous peoples throughout the tropics. The plant has a very long history of use and appears in ancient religious artifacts and on idols among some of the ancient Chilean Amerindians.

Throughout South and Central America, Brazilian peppertree is reported to be an astringent, antibacterial, diuretic, digestive stimulant, tonic, antiviral, and wound healer. In Peru, the sap is used as a mild laxative and a diuretic, and the entire plant is used externally for fractures and as a topical antiseptic. The oleoresin is used externally as a wound healer, to stop bleeding, and for toothaches, and it is taken internally for rheumatism and as a purgative. In South Africa, a leaf tea is used to treat colds, and a leaf decoction is inhaled for colds, hypertension, depression, and irregular heart beat. In the Brazilian Amazon, a bark tea is used as a laxative, and a bark-and-leaf tea is used as a stimulant and antidepressant. In Argentina, a decoction is made with the dried leaves and is taken for menstrual disorders and is also used for respiratory and urinary tract infections and disorders.

Brazilian peppertree is still employed in herbal medicine today in many countries. It is used for many conditions in the tropics, including menstrual disorders, bronchitis, gingivitis, gonorrhea, gout, eye infections, rheumatism, sores, swellings, tuberculosis, ulcers, urethritis, urogenital disorders, venereal diseases, warts, and wounds. In Brazilian herbal medicine today, the dried bark and/or leaves are employed for heart problems (hypertension and irregular heart beat), infections of all sorts, menstrual disorders with excessive bleeding, tumors, and general inflammation. A liquid extract or tincture prepared with the bark is used internally as a stimulant, tonic, and astringent, and externally for rheumatism, gout, and syphilis.

In laboratory tests, the essential oil (as well as leaf and bark extracts) has demonstrated potent antimicrobial properties. Brazilian peppertree has displayed good-to-very strong in vitro antifungal actions against numerous fungi, as well as Candida. One research group indicated that the antifungal action of the essential oil was more effective than the antifungal drug Multifungin®. The essential oil and leaves have clinically demonstrated in vitro antibacterial activity against numerous bacterial strains (which probably explains why it is an herbal remedy for so many infectious conditions in its native countries). In 1996, a U.S. patent was awarded for an essential oil preparation of Brazilian peppertree as a topical bactericidal medicine used against Pseudomonas and Staphylococcus for humans and animals, and as an ear, nose, and/or throat preparation against bacteria. Another patent was awarded in 1997 for a similar preparation used as a topical antibacterial wound cleanser. In much earlier in vitro tests, a leaf extract of Brazilian peppertree demonstrated antiviral actions against several plant viruses. In addition to these documented antimicrobial properties, Brazilian peppertree passed an anticancer plant screening program in 1976 by demonstrating antitumorous actions. More recently, in 2002, researchers in Argentina documented that it was toxic in vitro against a human liver cancer cell line.

Over the years, several research groups have conducted animal studies on Brazilian peppertree that have further substantiated some of its many traditional uses in herbal medicine. A fruit extract and a leaf extract were shown to lower blood pressure in dogs and rats, as well as to stimulate uterine activity in guinea pigs and rabbits. Leaf extracts have clinically demonstrated pain-relieving activity in mice and antispasmodic properties in rats and guinea pigs (including uterine antispasmodic actions). In 1974, the anti-inflammatory effect of Brazilian peppertree was documented; the herb was used to treat 100 patients with chronic cervicitis and vaginitis effectively. In 1995 and 1996, other researchers documented the anti-inflammatory properties of this herb once again.

A monograph published in 1976 on Brazilian peppertree’s essential oil indicated no toxicity in animals and humans ingesting or applying the essential oil topically. Today, herbalists and natural health practitioners in both North and South America use Brazilian peppertree mostly for colds, flu, and other upper respiratory infections; as a remedy for hypertension and for irregular heartbeat; for fungal infections and Candida; and as a female balancing herb for numerous menstrual disorders, including menstrual cramps and excessive bleeding.

Cautions: It has as a mild hypotensive effect (lowers blood pressure).

Traditional Preparation: The leaves are best prepared as an infusion, and the bark is best prepared as a decoction or an alcohol tincture. Generally, 1/2 cup of a bark decoction twice daily is used for colds, flu, sore throats and other upper respiratory infections; 2-3 ml of a 4:1 tincture taken two or three times daily can be substituted, if desired. This traditional remedy is also used as a heart tonic and for irregular heartbeat. A leaf decoction twice daily or as needed is generally used for menstrual disorders. See Traditional Herbal Remedies Preparation Methods page if necessary for definitions.

Contraindications: This plant was shown to stimulate the uterus in animal studies and therefore should not be used in pregnancy.

Drug Interactions: None reported. However, this plant has exhibited hypotensive actions in animal studies; in light of such, it is conceivable that the use of this plant may potentiate high blood pressure medications.

† The statements contained herein have not been evaluated by the Food and Drug Administration. The information contained in this plant database file is intended for education, entertainment and information purposes only. This information is not intended to be used to diagnose, prescribe or replace proper medical care. The plant described herein is not intended to treat, cure, diagnose, mitigate or prevent any disease. Please refer to our Terms and Conditions for using this plant database file and web site.

The leaves contain unknown bitter substances and tannis, which make administration for inflammatory alterations of the skin and oral mucous membranes plausible.

The fruit resin is purgative in effect. The essential oil is fungicidal and is said to be excreted primarily through the lungs and the kidneys. No experimental data are available for the traditional areas of administration.

Unproven Uses: Internal uses in folk medicine include infections of the pharynx, repiratory tract conditions, rheumatism (decoction), for leucorrhea, suppuration of the mucous membranes and hypertension (infusion), for swellings, loss of teeth, conjunctivitis (leaf juice), and as a diuretic. External applications are considered to include uterus prolapse, eye inflammations, joint pains, colds (used as healing baths), as a vulnerary and for rheumatism.

Precautions and adverse reactions: No health hazards are known in conjunction with the proper administration of designated therapuetic dosages.

Daily Dosage (leaves): To prepare an infusion, use 30 g drug to 500 ml water. For inflammation of the mucous membranes, gargle with infusion 3 times daily. For wound cleansing, wash wounds with infusion.

Machado, D., et al. “Antidepressant-like effect of rutin isolated from the ethanolic extract from Schinus molle L. in mice: evidence for the involvement of the serotonergic and noradrenergic systems.” Eur. J. Pharmacol. 2008 Jun; 587(1-3): 163-8.

Machado, D., et al. “Antidepressant-like effect of the extract from leaves of Schinus molle L. in mice: Evidence for the involvement of the monoaminergic system.” Prog. Neuropsychopharmacol. Biol. Psychiatry. 2007 Mar; 31(2): 421-8.

Ingredients: 100% pure Brazilian peppertree (Schinus molle) bark. No binders, fillers or additives are used. It is a wild harvested product—grown naturally in the Brazilian Amazon without any pesticides or fertilizers.

Suggested Use: Brazilian peppertree is best prepared as an alcohol tincture. Combine 1 part bark powder with 4 parts 90 proof alcohol (everclear or vodka). Allow to macerate for 2 weeks while agitating solution daily. Strain into a clean bottle and seal. It is traditionally taken in dosages of 2-3 ml (60 to 90 drops) 2-3 times daily. Take 60 drops (2 ml) 2-3 times daily or as needed. Can also be used externally by applying to the skin twice daily and letting dry completely. As a gargle or mouth rinse, dilute 60 drops (2 ml) in a small amount of warm water and swish in mouth 2-3 times daily. For more complete instructions on preparing herbal remedies, see the Methods for Preparing Herbal Remedies Page.

Contraindications: This plant has been documented with uterine stimulant and uterine antispasmodic actions in animal studies and should therefore not be used in pregnancy.

This plant has a traditional use in South America for heart problems (hypertension and arrhythmia). Studies with rats and dogs reported a hypotensive effect. People with low blood pressure should be monitored for this possible effect.