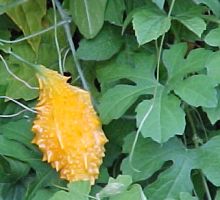 Bitter melon grows in tropical areas, including parts of the Amazon, east Africa, Asia, and the Caribbean, and is cultivated throughout South America as a food and medicine. It’s a slender, climbing annual vine with long-stalked leaves and yellow, solitary male and female flowers borne in the leaf axils. The fruit looks like a warty gourd, usually oblong and resembling a small cucumber. The young fruit is emerald green, turning to orange-yellow when ripe. At maturity, the fruit splits into three irregular valves that curl backwards and release numerous reddish-brown or white seeds encased in scarlet arils. The Latin name Momordica means “to bite,” referring to the jagged edges of the leaves, which appear as if they have been bitten. All parts of the plant, including the fruit, taste very bitter.

In the Amazon, local people and indigenous tribes grow bitter melon in their gardens for food and medicine. They add the fruit and/or leaves to beans and soup for a bitter or sour flavor; parboiling it first with a dash of salt may remove some of the bitter taste. Medicinally, the plant has a long history of use by the indigenous peoples of the Amazon. A leaf tea is used for diabetes, to expel intestinal gas, to promote menstruation, and as an antiviral for measles, hepatitis, and feverish conditions. It is used topically for sores, wounds, and infections and internally and externally for worms and parasites.

In Brazilian herbal medicine, bitter melon is used for tumors, wounds, rheumatism, malaria, vaginal discharge, inflammation, menstrual problems, diabetes, colic, fevers, worms. It is also used to induce abortions and as an aphrodisiac. It is prepared into a topical remedy for the skin to treat vaginitis, hemorrhoids, scabies, itchy rashes, eczema, leprosy and other skin problems. In Mexico, the entire plant is used for diabetes and dysentery; the root is a reputed aphrodisiac. In Peruvian herbal medicine, the leaf or aerial parts of the plant are used to treat measles, malaria, and all types of inflammation. In Nicaragua, the leaf is commonly used for stomach pain, diabetes, fevers, colds, coughs, headaches, malaria, skin complaints, menstrual disorders, aches and pains, hypertension, infections, and as an aid in childbirth.

Bitter melon contains an array of biologically active plant chemicals including triterpenes, proteins, and steroids. One chemical has clinically demonstrated the ability to inhibit the enzyme guanylate cyclase that is thought to be linked to the cause of psoriasis and also necessary for the growth of leukemia and cancer cells. In addition, a protein found in bitter melon, momordin, has clinically demonstrated anticancerous activity against Hodgkin’s lymphoma in animals. Other proteins in the plant, alpha- and beta-momorcharin and cucurbitacin B, have been tested for possible anticancerous effects. A chemical analog of these bitter melon proteins has been developed, patented, and named “MAP-30″; its developers reported that it was able to inhibit prostate tumor growth. Two of these proteins-alpha- and beta-momorcharin-have also been reported to inhibit HIV virus in test tube studies. In one study, HIV-infected cells treated with alpha- and beta-momorcharin showed a nearly complete loss of viral antigen while healthy cells were largely unaffected. The inventor of MAP-30 filed another patent which stated it was “useful for treating tumors and HIV infections . . . ” Another clinical study showed that MAP-30’s antiviral activity was also relative to the herpes virus in vitro.

In numerous studies, at least three different groups of constituents found in all parts of bitter melon have clinically demonstrated hypoglycemic (blood sugar lowering) properties or other actions of potential benefit against diabetes mellitus. These chemicals that lower blood sugar include a mixture of steroidal saponins known as charantins, insulin-like peptides, and alkaloids. The hypoglycemic effect is more pronounced in the fruit of bitter melon where these chemicals are found in greater abundance.

To date, close to 100 in vivo studies have demonstrated the blood sugar-lowering effect of this bitter fruit. The fruit has also shown the ability to enhance cells’ uptake of glucose, to promote insulin release, and to potentiate the effect of insulin. In other in vivo studies, bitter melon fruit and/or seed has been shown to reduce total cholesterol. In one study, elevated cholesterol and triglyceride levels in diabetic rats were returned to normal after 10 weeks of treatment.

Several in vivo studies have demonstrated the antitumorous activity of the entire plant of bitter melon. In one study, a water extract blocked the growth of rat prostate carcinoma; another study reported that a hot water extract of the entire plant inhibited the development of mammary tumors in mice. Numerous in vitro studies have also demonstrated the anticancerous and antileukemic activity of bitter melon against numerous cell lines, including liver cancer, human leukemia, melanoma, and solid sarcomas.

Bitter melon, like several of its isolated plant chemicals, also has been documented with in vitro antiviral activity against numerous viruses, including Epstein-Barr, herpes, and HIV viruses. In an in vivo study, a leaf extract increased resistance to viral infections and had an immunostimulant effect in humans and animals, increasing interferon production and natural killer cell activity.

Many in vivo clinical studies have demonstrated the relatively low toxicity of all parts of the bitter melon plant when ingested orally. However, toxicity and even death in laboratory animals has been reported when extracts are injected intravenously. Other studies have shown extracts of the fruit and leaf (ingested orally) to be safe during pregnancy. The seeds, however, have demonstrated the ability to induce abortions in rats and mice, and the root has been documented as a uterine stimulant in animals. The fruit and leaf of bitter melon have demonstrated an in vivo antifertility effect in female animals; and in male animals, to affect the production of sperm negatively.

Over the years scientists have verified many of the traditional uses of this bitter plant that continues to be an important natural remedy in herbal medicine systems. Bitter melon capsules and tinctures are becoming more widely available in the United States and are employed by natural health practitioners for diabetes, viruses, colds and flu, cancer and tumors, high cholesterol, and psoriasis. Concentrated fruit and seed extracts can be found in capsules and tablets, as well as whole herb/vine powders and extracts in capsules and tinctures.

Cautions: It lowers blood sugar levels and has abortive and contraceptive effects.

Traditional Preparation: 1 cup of a standard leaf or whole herb decoction is taken one or two times daily, or 1-3 ml of a 4:1 tincture is taken twice daily. Powdered leaf in tablets or capsules – 1 to 2 g can be substituted, if desired. The traditional South American remedy for diabetes is to juice 1-2 fresh bitter melon fruits and drink twice daily. For seed or fruit extracts in capsules or tinctures, follow the label instructions.

Bitter melon traditionally has been used as an abortive and has been documented with weak uterine stimulant activity; therefore, it is contraindicated during pregnancy.

This plant has been documented to reduce fertility in both males and females and should therefore not be used by those undergoing fertility treatment or seeking pregnancy.

The active chemicals in bitter melon can be transferred through breast milk; therefore, it is contraindicated in women who are breast feeding.

All parts of bitter melon (especially the fruit and seed) have demonstrated in numerous in vivo studies that they lower blood sugar levels. As such, it is contraindicated in persons with hypoglycemia. Diabetics should check with their physicians before using this plant and use with caution while monitoring their blood sugar levels regularly as the dosage of insulin medications may need adjusting.

Although all parts of the plant have demonstrated active antibacterial activity, none have shown activity against fungi or yeast. Long-term use of this plant may result in the die-off of friendly bacteria with resulting opportunistic overgrowth of yeast (Candida). Cycling off the use of the plant (every 21-30 days for one week) may be warranted, and adding probiotics to the diet may be beneficial if this plant is used for longer than 30 days.

10.Momordica charantia L. Cucurbitaceae. “Papailla”, “Balsam pear”. Fruit edible cooked. Plant decoction used for colic, and worms; infusion of fruit and flowers used for hepatitis. Seed pulp mixed with lard as a suppurative (SOU). Considered vermicide, stomachic, emmenagogue, and very effective in the expulsion of Trichocephalos. Fruit decoction used as febrifuge and emetic (PEA). Leaf decoction used by the “Cuna” for measles (RVM), by Brazilians for fever, itch, and sores (BDS). Seeds and pericarp contain saponin glycosides which produce elaterin and alkaloids, which causes vomiting and diarrhea (LAE). Leaf infusion a common folk remedy for diabetes around Iquitos (AYA). TRAMIL cites it as relatively POISONOUS (TRA). On the patent for Compound Q for AIDS, as a source of momocharin. Also contains rosmarinic acid, with antiviral activity and calceolarioside and verbascoside.”

Teoh, S., et al. “A histological study of the structural changes in the liver of streptozotocin-induced diabetic rats treated with or without Momordica charantia (bitter gourd).” Clin Ter. 2009 Jul-Aug; 160(4): 283-6.

Reyes, B. A., et al. “Anti-diabetic potentials of Momordica charantia and Andrographis paniculata and their effects on estrous cyclicity of alloxan-induced diabetic rats.” J. Ethnopharmacol. 2005 Nov 16;

Ingredients: 100% pure bitter melon (Momordica charantia) whole herb (root, leaf, stem, flowers). No binders, fillers or additives are used. It is a wild harvested product—grown naturally in the Brazilian Amazon without any pesticides or fertilizers.

Suggested Use: This plant is best prepared as a decoction. Use one teaspoon of powder for each cup of water. Bring to a boil and gently boil in a covered pot for 20 minutes. Allow to cool and settle for 10 minutes and strain warm liquid into a cup (leaving the settled powder in the bottom of the pan). It is traditionally taken in one cup dosages, 2-3 times daily. For more complete instructions on preparing herbal decoctions, see the Methods for Preparing Herbal Remedies Page.

Do not use if pregnant or breast feeding.

This plant has been documented in animal studies to reduce fertility in both males and females and should therefore not be used by those undergoing fertility treatment or seeking pregnancy.

Bitter melon has demonstrated in numerous in vivo studies that it lowers blood sugar levels. As such, it is contraindicated in persons with hypoglycemia. Diabetics should use with caution while monitoring their blood sugar levels regularly.

Drug Interactions: It may potentiate insulin and anti-diabetic drugs.

Share and Enjoy:
Tagged with: and as an antiviral for measles • and feverish conditions • and infections and internally and externally for worms and parasites • for diabetes • for sores • Hepatitis • to expel intestinal gas • to promote menstruation • Wounds