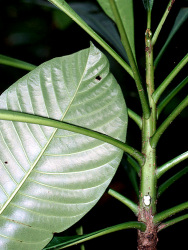 Bellaco-caspi is a tropical rainforest tree growing 8-16 m in height with a tall, narrow, pyramidal crown. The trunk is 30-40 cm in diameter with rough mottled bark. The tree produces white perfumed flowers and a 20 cm seed pod with numerous winged seeds inside. The leaves are bright green and about 25 – 30 cm long by 3-5 cm wide. When the leaves are broken off their stems, and the stems are broken from the branches, a milky white latex is exuded. Wounding the tree bark will also exude the latex.

There are 7 to 8 species of Himatanthus trees that can be found from Central America to Northern South America—most indigenous to the Amazon are medium to large trees found in the moist and flooded forests at lower elevations (below 500 m).

The bark and the latex of bellaco-caspi has a long history of use among the Indians in the Amazon. The Karijonas powder the tree bark and sprinkle it directly onto stubborn wounds and sores. The Shipibo-Conibo Indians in Peru prepare a decoction of the bark and take it internally for rheumatism and body aches and pain. They also put the latex in warmed baths and bathe the part of the body suffering from arthritis, pain and/or inflammation, as well as put the latex directly onto abscesses, sores, and skin ulcers. The Ka’apor Indians in the Brazilian Amazon take a bark decoction for stomachaches and use the decoction topically for dog mange and feed it to dogs who are sick and skinny. The Tikuna Indians also apply the latex topically to treat wounds and the Waoranis rub the latex on bot-fly bites to suffocate and kill the larvae under the skin (in animals and humans).

Bellaco-caspi is also popular as a natural remedy in Peruvian herbal medicine systems. It is considered a pain-reliever, blood cleanser, fever-reducer, astringent, anti-inflammatory and laxative. It is often employed for arthritis, rheumatism and back pain; cancer and tumors; skin issues such as wounds, abscesses, ulcers, boils, rashes and sores; gastric ulcers, intestinal and skin parasites (worms); and for tuberculosis and fevers.

Bellaco-caspi is found in The Dispensatory of the United States of America which was published in 1918 and asserted febrifuge, anthelmintic and emmenagogue actions to the tree.

A review of some of the chemicals found in bellaco-caspi might explain some of the many traditional uses of this tropical rainforest tree. An antitumor iridoid compound and two depsides showing inhibitory activity of monoamine oxidase B (MAO-B) have been isolated from bellaco-caspi bark. In addition, two iridoid chemicals called plumericin and isoplumericin have been found in the tree bark and the latex. These two chemicals have been reported with cytotoxic, anticancerous, antifungal and antibacterial actions in laboratory research. The latex also contains a polymeric material called cis-polyisoprene as well as calcium, magnesium, arabinose, glucose, xylose, rhamnose and glalctose.

Many of bellaco-caspi’s traditional uses are being verified in preliminary studies and laboratory research. In 2005, Brazilian researchers verified bellaco-caspi’s traditional use for stomach ulcers and digestion problems. They reported that an extract of the bark significantly protected rats from lab-induced ulcers and reduced gastric hypersecretion through several novel mechanisms of actions. The tree’s long standing use for healing wounds was verified by Peruvian researchers in an animal study published in 1997. Brazilian researchers confirmed in 2000 that the latex evidenced significant anti-inflammatory and pain relieving actions in laboratory animals which confirmed earlier anti-inflammatory research in 1978. They reported that bellaco-caspi could exert anti-inflammatory effects even in the acute phase of the inflammatory process and attributed these effects to the cinnamate chemicals found in the latex and bark.

In 2001, researchers in the United States reported that the bark of bellaco-caspi was significantly cytotoxic in vitro to 5 different human cancer cell lines which may help explain why the tree has been used against cancer and tumors for many years in South America. They related this anti-cancerous action to the iridoids and triterpenoids in the tree bark. It also passed a brine shrimp assay which predicts anti-tumor activitiy in 2003.

Bellaco-caspi’s uses for infected wounds, tuberculosis, syphilis, and even mange might be explained by the tree’s documented antimicrobial actions. In 1998, researchers in Brazil reported that the bark evidenced a greater antifungal effect than the control drug that was used (nistatin) and related this action to the triterpenic esters found in the bark. Research published in Brazil in 2006 and 2004 also reported in vitro antimicrobial effects of the bark against, candida, E. coli, Staphylococcus, Bacillus, Mycobacterium phlei, and other Gram (+) and Gram (-) pathogenic bacteria. The latex was also documented with in vitro actions against Bacillus and Pseudomonas. Its use for asthma might be explained by the smooth-muscle relaxant actions documented in 2005 by Brazilian researchers working with a bark extract.

Toxicity studies in laboratory animals indicate that the use of bellaco-caspi at traditional dosages is non-toxic. Even when a bark extract was given to pregnant rats, there were no toxic, abortive, or birth defects reported.

Bellaco-caspi is a well respected and widely used medicinal plant in herbal medicine systems in the Amazon and South America. With many of its traditional uses being explained and verified by research, it is sure to remain an important plant in the naturopathic and herbal medicine practitioner’s treasure chest of natural remedies. It is gaining some recognition outside of the South America and a handful of bark extract and latex extract products can now be found for sale in the United States and Europe. It is mainly used for pain and inflammation related to many conditions (including female reproductive organ conditions), cancerous tumors (internal and external), and as a broad spectrum antimicrobial for various internal and external infections.

Cautions: None reported. High dosages may have a laxative or purgative effect.

Traditional Preparation: In traditional Indian medicine systems the bark is prepared as a decoction or infusion and the straight latex is applied to the skin topically and ingested in a small amount of water. In herbal medicine systems in the cities of South America, various tinctures, fluid extracts, and capsules are sold in the market place for easier use and longer storage.

Castillo, D., et al. “Spirolactone iridoids might be responsible for the antileishmanial activity of a Peruvian traditional remedy made with Himatanthus sucuuba (Apocynaceae).” J. Ethnopharmacol. 2007 Jun 13; 112(2): 410-4.

The Karijonas, who formerly lived in the Rio Ajaju area, dried and powdered the flaky lactiferous bark and sprinkled the powder on wounds that would not heal. The Tikunas put the fresh latex on wounds. Tropical warble fly infections are treated with the white latex of this plant amongst the Waoranis. The latex is rubbed over the bite to suffocate and kill the larva.

Ingredients: 100% pure bellaco-caspi bark (Himatanthus sucuuba). No binders, fillers or additives are used. This is a wild harvested plant—grown naturally in the Peruvian Amazon without any pesticides or fertilizers.

Suggested Use: Bellaco-caspi is best prepared as an alcohol tincture. Combine 1 part bark powder with 4 parts 90 proof alcohol (everclear or vodka). Allow to macerate for 2 weeks while agitating solution daily. Strain into a clean bottle and seal. It is traditionally taken in dosages of 2-4 ml (60-120 drops) twice daily or as needed. Can also be used externally by applying to the skin twice daily and letting dry completely. For more complete instrutions on preparing herbal tinctures see the Methods for Preparing Herbal Remedies Page.