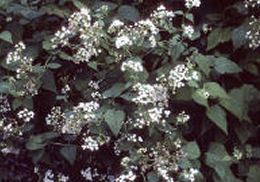 Ayapana is an ornamental erect perennial herb with aromatic leaves that grows 20 to 30 cm high. The 5-8 cm long leaves are smooth, opposite and lanceolate The many flowering heads are each 6 to 13 millimeters long and bear about twenty pink flowers, which are 6 to 7 millimeters long. Ayapana is native to South America and can be found in the Amazon region of Brazil, Ecuador, Peru, and the three Guyanas. It has been introduced into the U.S. and can be found in Puerto Rico and Hawaii and it has naturalized in other tropical countries as well. Ayapana has three different Latin names (Ayapana triplinervis,Eupatorium ayapana, and E. triplinerve) but all three names refer to the same plant.

Ayapana is in the large Asteraceae plant family (which is also called the sunflower or daisy family). The Asteraceae is the second largest family in its Division with some 1,100 genera and over 20,000 recognized species. Two common and well known North American medicinal plant species in the family are boneset (Eupatorium perfoliatum) and Joe-Pye-weed (Eupatorium purpureum).

The Shipibo-Conibo Indians of Peru take the leaf and stem of the plant internally for colic, stomach pain, edema, and as a depurative. They prepare a paste of the leaves to use externally on wounds and hemorrhages. For internal hemorrhages, snake bite and vomiting they juice the leaves and drink it internally. In Peruvian herbal medicine the plant is believed to be sudorific, cicatrizant, astringent, stomachic, stimulant, febrifuge, antidiarrhetic, and anti-tumorous. The leaves are prepared in infusions, decoctions, baths and plasters to protect the liver, for inflammation of the urinary tract, and for tetanus. An infusion of the leaf and stem is used as a digestive stimulant. Ayapana is thought to be antineoplastic and used for cancerous tumors in both Peru and Argentina. An infusion of the entire plant is also used in Argentina to stimulate menstruation.

In Brazilian herbal medicine the leaf juice and an infusion of the leaves and stems are considered tonic, stimulant, astringent, antidysenteric and sudorific. An infusion of the leaves is mixed with honey and used for coughs and sore throats. A leaf infusion is also used for queasy stomachs, indigestion, diarrhea, fever, headaches, insomnia, nausea and vomiting, and stomach ulcers. The leaf juice is used externally as an astringent and emollient and is rich in vitamin C. The leaf juice is swished in the mouth for gingivitis and mouth ulcers. The leaf juice is also highly reputed against snakebite in the Brazilian Amazon and it’s considered a good sedative when taken internally and recommended externally for simple wounds and stubborn ulcers. Ayapana is also used for angina, gastric ulcers, cholera, eye and ear problems in Brazil.

In the Amazon region of the Guyanas (Surinam, Guyana, and French Guiana) ayapana is considered a febrifuge (reduces fever), alexiteric (anti-infective), sudorific (causes sweating), digestive, and laxative. A leaf infusion is employed for headaches, colds and flu, mouth sores and ulcers, and hypertension. The whole plant is decocted to relieve nausea and vomiting caused from malaria by the Palikur of French Guiana and this same decoction is used in Surinam for chronic diarrhea.

Ayapana can be found outside the Amazon where it is also used in other herbal medicine systems. In India a leaf infusion is considered a cardiotonic, diaphoretic, emetic, hemostat, laxative, stimulant, and tonic. In Trinidad, the plant is used for chest colds, constipation, fevers, flu, pneumonia, and yellow fever. In Malaya it is considered sudorific and used for bronchitis and diarrhea.

Ayapana was first written about in the United States in the1887 American Journal of Pharmacy which noted: “The leaves are recommended against indigestion, pectoral complaints and in cholera, and were used for similar purposes in Europe in the early part of the present century.” Ayapana leaves are official in the French Pharmacopoeia.

Ayapana is a rich source of naturally occurring coumarin chemicals. Coumarins are chemical compounds found in many plants and which usually have a sweet scent—much like newly-mown hay. Coumarin has clinical value as the precursor for several anticoagulant drugs; most notably, one widely prescribed drug called warfarin. Two of ayapana’s coumarin chemicals are called ayapanin and ayapin which were first discovered in the late 1930’s. These chemicals were reported to have pronounced blood-thinning or anticoagulant actions in four early studies.

Ayapana also contains a coumarin named hernarin (7-methoxycoumarin) which may help explain why the plant is used in herbal medicine as an anti-tumor remedy. Recent research in 2005 reported that this chemical was toxic to cancer cells—including multi-drug resistant cancer cells and leukemic cells.

In a laboratory study in 1998, a methanol extract of the dried leaves of ayapana did not evidence any antibacterial activity but did show a weak antifungal activity by researchers in Mauritius. Other researchers in India working with a pet ether extract of the leaves also reported marginal or no results against various strains of bacteria and fungi. An ethanol extract of the entire plant (harvested in Surinam) was reported to be active against Bacillus subtilis at 50 mg/ml but inactive against other bacterial, yeast and fungal strains tested. Researchers in India reported a weak activity against several fungal strains with the leaf essential oil.

The essential oil of the flowers has yielded much better antimicrobial results than the plant itself. In 1979, researchers in India reported a strong activity against 10 strains of fungi in vitro using the essential oil of ayapana flowers. In 1993, the essential oil from the flowers of ayapana was reported to possess antibacterial (against staph, cholera, pneumonia, and shigella), as well as antiparasitic (Ascaris), and anthelminitic (Taenia) actions by researchers in India. In an early animal study, the flower essential oil injected into mice was reported to have CNS depressant, analgesic, and sedative effects (as well as an in vitro antibacterial effect).

Several universities are supporting research concerning ayapana’s use as an additive to stored food crops to keep common pests and insects from feeding on them.

Several companies specializing in “amazon remedies” have launched products into the U.S. natural products market recently that classify their products as Eupatorium triplinerve and Eupatorium ayapana. However, consumers should be aware that these products are not, in fact, the ayapana plant described herein. These companies are using the Peruvian common name of “asmachilca” to market their product. This plant, is in fact, a completely different plant that derives from the mid- to high-Andes region up to 4000 m in elevation (and is not found in the Amazon at all). It is properly classified as Aristeguieta gayana (which has a synonym of Eupatorium gayanum), but it is NOT Eupatorium ayapana. Asmachilca is the indigenous name given to this plant by the Quechua or Ketchwa people of the Andes in Peru and Ecuador, and, in their herbal medicine system, this plant is mostly employed for asthma and as a diuretic. There are no published clinical studies, laboratory tests, chemical analyses, or toxicity studies on asmachilca, which is probably why these companies are trying to market their products incorrectly under the Eupatorium ayapana name instead.

While ayapana remains a popular herbal remedy in Peru today, due to the misleading or inaccurate marketing issues here, it is unclear whether there are actually any true Ayapana triplinervis products for consumers to choose from in the United States today. American consumers should consider these types of issues when looking for a reliable source of South American botanical products as well as reliable information about them.

Cautions: Contains natural coumarins which may thin the blood.

Traditional Preparation: Generally, if the entire plant is prepared into a natural remedy, a decoction method is use. When using the leaves, dried or fresh, an infusion method is typically used. See Traditional Herbal Remedies Preparation Methods page if necessary for definitions.

Contraindications: Ayapana leaves contain naturally occurring coumarins. Coumarin has an anti-coagulant and blood thinning effect and is a precursor to coumadin drugs. Consult with your physician before taking this plant if you are taking coumadin drugs or if coumadin anticoagulant type drugs are contraindicated for your condition.

Drug Interactions: Ayapana may enhance or increase the effect of blood-thinning medications.

USES: The expressed juice and infusion of the whole plant are tonic, stimulant. astringent, antidysenteric, and sudorific; for cough and inflamed throat. Externally for curing gingivitis and aphthae. Leaf juice is a cicatrizant and highly reputed against snakebite.”

Ingredients: 100% pure ayapana leaves (Ayapana triplinervis). No binders, fillers or additives are used. This is a wild harvested plant—grown naturally in the Peruvian Amazon without any pesticides or fertilizers.

Suggested Use: This plant is best prepared as an infusion (tea): Use one teaspoon of powder for each cup of water. Pour boiling water over herb in cup and allow to steep 10 minutes. Strain tea (or allow settled powder to remain in the bottom of cup) and drink warm. It is traditionally taken in 1 cup dosages, twice daily. For more complete instrutions on preparing herbal infusions see the Methods for Preparing Herbal Remedies Page.

Ayapana leaves contain naturally occurring coumarins. Coumarin has an anti-coagulant and blood thinning effect and is a precursor to coumadin drugs. Consult with your physician before taking this plant if you are taking coumadin drugs or if coumadin anticoagulant type drugs are contraindicated for your condition.

Drug Interactions: Ayapana may enhance or increase the effect of blood-thinning medications.

Share and Enjoy:
Tagged with: a paste of the leaves to use externally on wounds and hemorrhages • and as a depurative • edema • for internal hemorrhages • snake bite and vomiting they juice the leaves and drink it internally. • stomach pain • Take the leaf and stem of the plant internally for colic