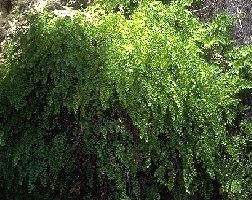 Avenca is a small, slow-growing evergreen fern found throughout the world in moist forests. It reaches 35 cm tall, growing in stands from its creeping rhizome, and bears leaves up to 50 cm long. It can be found in the rainforests of the Amazon as well as in the more temperate, moist forests of Southern Europe and the United States (where it is commonly referred to as maidenhair fern). It is called culantrillo in Peru and avenca in Brazil. These days avenca can be found in many plant stores and nurseries where it is sold as an ornamental landscape fern for shade gardens.

In the Peruvian Amazon, local people prepare the fronds of the plant as an infusion or syrup and use it as a diuretic, as an expectorant and to calm coughs, to promote perspiration and menstruation, and to treat urinary disorders, colds, rheumatism, heartburn, gallstones, alopecia (hair loss), and sour stomach. In the highlands of the Peruvian Andes, local shamans and healers decoct the rhizome and use it for alopecia, gallstones, and jaundice. In the Brazilian Amazon, it is recommended as a good expectorant and used for bronchitis, coughs, and other respiratory problems.

Avenca has long held a place in herbal medicine systems worldwide. In European herbal medicine, its documented use predates the era of Dioscorides and Pliny (23-79 A.D.). Culpepper (1787 ed.) said, “This and all other Maiden Hair Ferns is a good remedy for coughs, asthmas, pleurisy, etc., and on account of its being a gentle diuretic also in jaundice, gravel and other impurities of the kidneys.” In France, the fronds and rhizomes were once made into a syrup called “Sirop de Capillaire,” which was a favorite medicine for upper respiratory problems such as coughs and excessive mucus. The plant is also used widely throughout the world for dandruff, hair loss, and menstrual difficulties.

In Brazilian herbal medicine today, the frond and leaf are employed for hair loss, coughs, bronchitis, laryngitis and throat dryness, and to improve appetite and digestion, stimulate renal function, regulate menstruation, and facilitate childbirth. In Peruvian herbal medicine, the frond and rhizome are used for hair loss, gallstones, hepatic calculi, hydrophobia, asthma, coughs, catarrh, and to regulate menstruation. In India, the entire plant is used for its cooling effects, for diabetes, colds, bronchial disease, and for its menstrual promoting properties. Externally it is used for boils, eczema, and wounds.

Chemical analysis of avenca reveals an array of compounds including triterpenes, flavonoids, phenylpropanoids, and carotenoids. Interestingly, despite its ancient use, there has been no specific research on avenca to isolate and test its chemicals for biological activities.

The plant has demonstrated little toxicity. However, in animal studies, it has been shown to have an antifertility effect. In the 1980s, two separate researchers in India found that a pet ether extract of the plant had an anti-implantation effect in rats, preventing conception.

In 1989 scientists in Iraq demonstrated avenca’s antimicrobial properties. A methanol extract of the aerial parts was reported to have in vitro antimicrobial actions against Bacillus, E. coli, Staphylococcus, Proteus, Pseudomonas, and Candida. French scientists demonstrated that an ethanol extract of the rhizome evidenced antiviral properties in vitro against Vesicular stomatitis virus. Other early (1967) research showed that a water extract of the entire plant had hypoglycemic activity when given to mice (10 mg/kg) orally. Much later (in 1993), Belgium scientists confirmed that avenca leaves had in vivo hypoglycemic properties in mice. In one study, a water extract of the aerial parts was given to mice (25 mg/kg) orally and found to reduce glucose-induced hyperglycemia. An ethanol extract, however, showed no activity. They reconfirmed these findings in 1995 by demonstrating that a water extract reduced glucose-induced hyperglycemia.

Despite the plant’s ancient history of use for respiratory disorders, no clinical research has been done to validate these traditional uses. In spite of the lack of scientific research done on avenca, herbalists and healthcare practitioners throughout the world continue to use the plant based on its traditional uses (for literally thousands of years): for respiratory disorders and hair loss, and to regulate menstruation.

Cautions: It has been documented in animals to have contraceptive and anti-fertility effects. It may lower blood sugar levels.

Avenca has a long history of use in herbal medicine systems to stimulate the uterus and promote menstruation; it is contraindicated in pregnancy.

The plant has shown to have an anti-implantation effect in animal studies and may prevent conception. Couples seeking fertility treatment or pregnancy should not take avenca.

Due to its effect on fertility and menstruation, avenca may have estrogen-like effects and should probably be avoided by women with estrogen-positive cancers.

All rights reserved. No part of this document may be reproduced or transmitted in any form or by any means, electronic or mechanical, including photocopying, recording, or by any information storage or retrieval system, including websites, without written permission

Medicinal Action and Uses—Has been used from ancient times medicinally, being mentioned by Dioscorides. Its chief use has been as a remedy in pectoral complaints. A pleasant syrup is made in France from its fronds and rhizomes, called Sirop de Capillaire, which is given as a favourite medicine in pulmonary catarrhs. It is flavoured with orange flowers and acts as a demulcent with slightly stimulating effects. Narbonne Honey is generally added to the syrup.

‘This and all other Maiden Hairs is a good remedy for coughs, asthmas, pleurisy, etc., and on account of its being a gentle diuretic also in jaundice, gravel and other impurities of the kidneys. All the Maidenhairs should be used green and in conjunction with other ingredients because their virtues are weak.’

Gerard writes of it:

‘It consumeth and wasteth away the King’s Evil and other hard swellings, and it maketh the haire of the head or beard to grow that is fallen and pulled off.’

Ingredients: 100% pure avenca (Adiantum capillus-veneris) leaf powder. No binders, fillers or additives are used. This is a wild harvested plant—grown naturally in the Brazilian Amazon without any pesticides or fertilizers.

Suggested Use: This plant is best prepared as an infusion (tea). Use one teaspoon of powder for each cup of water. Pour boiling water over herb in cup and allow to steep 10 minutes. Strain tea (or allow settled powder to remain in the bottom of cup) and drink warm. It is traditionally taken in 1/2 cup amounts, twice daily. For more complete instrutions on preparing herbal infusions see the Methods for Preparing Herbal Remedies Page.

Not to be used while pregnant.

Avenca has been documented to lower blood sugar levels in animal studies. It is probably contraindicated for people will hypoglycemia.

The plant has shown to have an anti-implantation effect in animal studies and may prevent conception. Couples seeking fertility treatment or pregnancy should not take avenca.

Due to its effect on fertility and menstruation, avenca may have estrogen-like effects and should probably be avoided by women with estrogen-positive cancers.

Share and Enjoy:
Tagged with: Alopecia • and sour stomach • and to treat urinary disorders • as an expectorant and to calm coughs • colds • gallstones • Hair Loss • Heartburn • Rheumatism • to promote perspiration and menstruation • use it as a diuretic