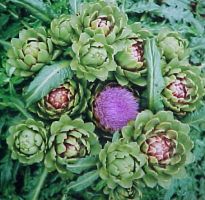 Alcachofra is the Brazilian name for the globe artichoke. A member of the milk thistle family, it grows to a height of about 2 m and produces a large, violet-green flower head. The flower petals and fleshy flower bottoms are eaten as a vegetable throughout the world, which has led to its commercial cultivation in many parts of South and North America (chiefly California) as well as in Europe. The artichoke was used as a food and medicine by the ancient Egyptians, Greeks, and Romans; in Rome, the artichoke was an important menu item at feasts. It wasn’t until the fifteenth century, however, that it made its appearance throughout Europe.

Artichoke has been used in traditional medicine for centuries as a specific liver and gallbladder remedy. In Brazilian herbal medicine systems, leaf preparations are used for liver and gallbladder problems, diabetes, high cholesterol, hypertension, anemia, diarrhea (and elimination in general), fevers, ulcers, and gout. In Europe, it is also used for liver and gallbladder disorders; in several countries, standardized herbal drugs are manufactured and sold as prescription drugs for high cholesterol and digestive and liver disorders. Other uses around the world include treatment for dyspepsia and chronic albuminuria. In France, a patent has been filed that describes an artichoke extract for treating liver disease, high cholesterol levels, and kidney insufficiency. In all herbal medicine systems where it is employed, artichoke is used to increase bile production in the liver, increase the flow of bile from the gallbladder, and to increases the contractive power of the bile duct. These bile actions are beneficial in many digestive, gallbladder, and liver disorders. Artichoke is also often used to mobilize fatty stores in the liver and detoxify it, and as a natural aid to lower cholesterol.

The artichoke is popular for its pleasant bitter taste, which is attributed mostly to a plant chemical called cynarin found in the green parts of the plant. Cynarin is considered one of artichoke’s main biologically active chemicals. It occurs in the highest concentration in the leaves of the plant, which is why leaf extracts are most commonly employed in herbal medicine. Other documented “active” chemicals include flavonoids, sesquiterpene lactones, polyphenols and caffeoylquinic acids.

In the 1970s, European scientists first documented cynarin’s ability to lower cholesterol in humans. Over the years, other researchers have continued to document artichoke’s or cynarin’s effect in this area. One of the more recent studies, published in 2000, was a double-blind, randomized, placebo-controlled study that used an artichoke leaf extract that was standardized to its cynarin content. For six weeks, 143 patients with high cholesterol were given the extract; at the end of the test, results showed a decrease of 10%-15% in total cholesterol, low density lipoprotein (LDL), and ratio of LDL to high-density lipoprotein (HDL) cholesterol. Scientists now report that the cholesterol-lowering effect of artichoke can be attributed to chemicals other than just cynarin, including several newly discovered ones.

The liver detoxifying and protective properties of artichoke first came to the attention of researchers in 1966 (in a study that supported its effect on liver regeneration in rats). A 1987 study that focused on the effects of rat liver cells subjected to harmful chemical agents found both cynarin and caffeic acids (both in artichoke) to have significant protective effects.

Investigations are still being conducted on artichoke’s beneficial effects on liver and gallbladder functions. The most recently documented finding, in 2002, noted that an artichoke leaf extract reversed damage done by harmful chemicals in rat liver cells and, in doing so, enhanced bile production.

A portion of artichoke’s liver protective properties is thought to be attributed to its documented antioxidant actions. A 2002 study focused on the antioxidant effects of artichoke extract in cultured blood vessel cells and reported that the extract demonstrated “marked protective properties against oxidative stress induced by inflammatory mediators . . .” Artichoke’s antioxidant properties were also confirmed in an earlier (2000) study that focused on human white blood cells under various induced oxidative stresses.

A 1999 clinical investigation focused on gallbladder function. It “showed the efficacy and safety of artichoke extracts (Cynara scolymus L.) in the treatment of hepatobiliary dysfunction and digestive complaints, such as sensation of fullness, loss of appetite, nausea and abdominal pain.” A 2000 study took this notion a step further. It was known that artichoke extract was indicated for dyspepsia, a digestive disorder involving the esophagus, duodenum, and upper gastrointestinal tract, but there are many symptom overlaps between dyspepsia and irritable bowel syndrome (IBS). A subgroup of patients with IBS was distilled from the dyspepsia study group and was monitored for 6 weeks after the original study had ended. Of the IBS patients, 96% rated artichoke leaf extract as better than or at least equal to previous therapies administered for their IBS symptoms.

The history of artichoke is a perfect example of science finally catching up to the longstanding traditional uses of a medicinal plant. While scientists still argue today over which specific chemical or group of chemicals is responsible for each documented beneficial action, the traditional uses for high cholesterol, as well as for liver, gallbladder, and digestive disorders, are being validated. While many Europeans still have to see their doctors for an artichoke extract prescription, concentrated natural leaf extracts and standardized extracts are widely available in the United States at health food stores. With the growing American trend to find more natural and healthy alternatives, these products will probably gain in popularity as consumers learn more of the most recent research studies. However, the most effective method to control cholesterol is with a sensible diet. Unfortunately, there are no magic bullets.

Traditional Preparation: Traditionally, 1 to 3 cups of a standard leaf infusion are taken daily after meals; 3-4 ml of a concentrated 4:1 liquid extract, or 3-5 g daily of dried herb in capsules, or tablets can be substituted, if desired. With standardized extract products, follow the instructions on the product label.

Contraindications: None reported for internal use. Dermatitis following contact with the fresh plant and leaves has been reported.

Artichoke has been documented in traditional uses to be hypoglycemic; however, no clinical studies have been published to confirm this action. Diabetics and people with hypoglycemia should use this plant product with caution and monitor their blood sugar levels closely in anticipation of these possible effects.

Drug Interactions: Artichoke extracts have been documented to lower blood cholesterol in human and animal studies and, as such, may potentiate the effects of cholesterol-lowering and statin drugs.

The above text has been printed from The Healing Power of Rainforest Herbs by Leslie Taylor, copyrighted © 2005 All rights reserved. No part of this document may be reproduced or transmitted in any form or by any means, electronic or mechanical, including photocopying, recording, or by any information storage or retrieval system, including websites, without written permission. † The statements contained herein have not been evaluated by the Food and Drug Administration. The information contained in this plant database file is intended for education, entertainment and information purposes only. This information is not intended to be used to diagnose, prescribe or replace proper medical care. The plant described herein is not intended to treat, cure, diagnose, mitigate or prevent any disease. Please refer to our Conditions of Use for using this plant database file and web site.

1. “Alcachofra is Brazilian artichoke. It effectively flushes uric acid from the system and is used as a diuretic. It increases gall bladder secretions and is used as an auxiliary remedy for digestive disorders. Liver disorders, especially those associated with alcoholism and malaria benefit from Alcachofra. It is thought to have a cleansing and healing effect on both the liver and gall bladder. Alcachofra’s high content of iron nourishes the blood. It has also been found to decrease cholesterol and blood pressure. Caution: Avoid if breast-feeding. Alcachofra may decrease milk production.”

2. “Artichoke leaf has a reputation as a choleretic (stimulates bile), diuretic and general stimulant. It helps to neutralize excessive acid in the body. It has been used for jaundice and dropsy.”

14. “Artichoke extract and/or cynarin, the main active consituent, has cholagogue [increases bile production by the liver]/ choleretic [increases flow of bile from the gallbladder] / choliokinetic action [ increases the contractive power of the bile duct].

Artichoke has been shown to increase the production and volume of bile flow by as much as four times normal in a 12-hour period.

Artichoke protects liver from poisonous effects of toxins in a manner similar to silymarin from milk thistle. It is able to prevent liver damage from the same wide range of poisons as milk thistle. Artichoke extract is also able to stimulate the regeneration of liver cells in much the same manner as does silymayin. The usefulness of artichoke for preventing blood and liver cholesterol elevation in the presence of toxins such as alcohol is also of note. Application in today’s world would also include the prevention of liver damage due to air-, water- and food-borne toxins. A French patent describes an artichoke extract for treating liver disease, high cholesterol levels and kidney insufficiency. Cynarin, and not pure caffeic acid, appears to be the component most responsible for this action.

Artichoke has lipid-producing and anticholesterolemic action. Artichoke reduces blood fats. It reduces cholesterol and cholinesterase levels. In simplest terms, the net effect of artichoke extract appears to be the result of both an activation of and an interference with cholesterol metabolism. That is, it mobilizes fat stores from the liver and other tissues such as white adipose tissue, and these fats pour into the blood from which they are subsequently excreted from the body. Cynarin decreases the rate of cholesterol synthesis in the liver, enchances biliary excretion of cholesterol, and increases conversion towards the bile acids. Not only cholesterol but other blood fats such as triglycerides can be reduced through the use of artichoke.”

15. “Scientific evidence supports the use of artichoke as a liver remedy. Cynarin is the active ingredient contained in the plant, and its highest concentration is in the leaves. According to reports, cynara (artichoke leaves) extract has demonstrated significant liver regenerating and protecting effects.”

Gebhardt, R. “Anticholestatic activity of flavonoids from artichoke (Cynara scolymus L.) and of their metabolites.” Med. Sci. Monit. 2001 May; 7 Suppl 1:316-20.

Verspohl, E., et al. “Effect of two artichoke extracts (36_U and 36_EB) on rat ileum (with respect to bowel syndrome) and the peristaltic threshold.” Phytomedicine. 2008 Apr 16.

Actions on Gallstones & the Gallbladder:

ngredients: 100% pure artichoke leaves (Cynara scolymus). No binders, fillers or additives are used. It is organically cultivated in the Brazilian Amazon without any pesticides or fertilizers.

Suggested Use: This plant is best prepared as an infusion (tea): Use one teaspoon of powder for each cup of water. Pour boiling water over herb in cup and allow to steep 10 minutes. Strain tea (or allow settled powder to remain in the bottom of cup) and drink warm. It is traditionally taken 1 cup dosages, 2-3 times daily. For more complete instructions on preparing herbal infusions, see the Methods for Preparing Herbal Remedies Page.

Drug Interactions: May enhance the effect of cholesterol-lowering drugs.