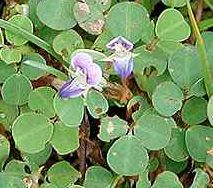 From The Healing Power of the Rainforest

Amor seco is a weedy, perennial herb that grows to 50 cm tall and produces numerous light-purple flowers and green fruits in small, beanlike pods. It is indigenous to many tropical countries and grows in open forests, pastures, along roadsides, and like many weeds – just about anywhere the soil is disturbed. In Brazil, the plant is known as amor seco or amor-do-campo; Peruvians call the plant manayupa. The Desmodium genus is a large one, with about 400 species of perennial and annual herbs growing in temperate and tropical regions in the Western hemisphere, Australia, and South Africa. In the South American tropics, Desmodium axillare, a closely related plant, is used interchangeably in herbal medicine systems.

Today, tribes in the Amazon rainforest use amor seco medicinally much as they have for centuries. A tea of the plant is given for nervousness, and it is used in baths to treat vaginal infections. Some tribes believe the plant has magic powers, and it is taken by lovers to rekindle a waning romance. Rio Pastaza natives in the Amazon brew a leaf tea and wash the breasts of mothers with it to promote milk flow. Additional indigenous tribal uses include a leaf decoction for consumption, an application of pounded leaves and lime juice for wounds, and a leaf infusion for convulsions and venereal sores. A survey, in which more than 8,000 natives in various parts of Brazil were interviewed, showed that a decoction of the dried roots of amor seco is a popular tribal remedy for malaria. The indigenous Garifuna tribe in Nicaragua uses a leaf decoction of amor seco internally for diarrhea and venereal disease and to aid digestion.

Amor seco is also quite popular in herbal medicine throughout South and Central America. In Peruvian herbal medicine today, a leaf tea is used as a blood cleanser; to detoxify the body from environmental toxins and chemicals; as a urinary tract cleanser; and to treat ovarian and uterine problems such as inflammation and irritation, vaginal discharges, and hemorrhages. In Belize (where the plant is called “strong back”), the entire plant is soaked in rum for 24 hours, and then 1/4 cup is taken three times daily for seven to ten days for backaches. Alternatively, an entire plant is boiled in 3 cups of water for 10 minutes, and 1 cup of warm tea is taken before meals for three to five days for relief of backache, muscle pains, kidney ailments, and impotence. In Brazilian herbal medicine, the dried leaves are used for the treatment of asthma, vaginal discharge, body aches and pains, ovarian inflammation, excessive urination, excessive mucus, and diarrhea. In Ghana, a leaf decoction is a popular remedy for bronchial asthma, constipation, dysentery, and colic, and is also used to dress wounds.

Amor seco is known to be rich in flavonoids, alkaloids, and chemicals known as soyasaponins. A novel soyasaponin in amor seco is dehydrosoyasaponin. It is considered a highly active chemical with therapeutic actions for asthma. Amor seco also contains a chemical called astragalin, which is a well-known antibacterial chemical found in the popular medicinal plant astragalus. Amor seco’s traditional uses for infections, venereal diseases, and wounds are probably related to this particular chemical in the plant.

Herbalists in Ghana have long used amor seco leaves to treat bronchial asthma. The treatment was so successful that it attracted attention from the scientific community. In 1977, a clinical observational study on humans showed that 1 to 2 teaspoons of dried amor seco leaf powder daily (in three dosages) produced improvement and remission in most asthma patients treated. In an effort to understand the anti-asthmatic properties of this effective natural remedy, scientists conducted various animal studies to determine how it worked. In ten different studies, researchers found that amor seco interfered with the production of many of the chemicals normally produced during an asthma attack: chemicals called spasmogens that cause contractions in the lung; histamine that triggers the allergic response; and chemicals called leukotrienes that are known to stimulate bronchoconstriction and increase mucus production in the airway – all key features of asthma. Many substances and allergens can cause a life-threatening allergic reaction called anaphylactic shock, or anaphylaxis. Several of these animal studies reported that amor seco had an anti-anaphylactic action against many known substances that trigger such allergic reactions.

Bronchoconstriction (the tendency of airways to constrict or become too narrow, thereby making it hard to breath) in response to various stimuli and allergens is a universal feature of asthma and anaphylactic reactions. Some researchers noted that amor seco has a muscle-relaxing effect in lung tissues (bronchodilator) and inhibited contractions and constriction induced by a variety of substances. Amor seco has also been shown to activate the chemical process known as potassium maxi-K channels. Maxi-K channels play an important role in regulating the tone of airway smooth muscle and the release of constrictive substances in the lungs. One of amor seco’s chemicals, dehydrosoyasaponin I, was cited as being “the most potent known potassium (maxi-K) channel opener.” This effect is also thought to contribute to amor seco’s therapeutic activity in asthma.

Amor seco’s documented anti-allergic activity acts to inhibit not only contraction of smooth muscle in the airways of the upper respiratory tract but also muscle contraction at multiple other sites throughout the body. These documented antispasmodic and muscle relaxant actions help explain why amor seco has been traditionally used for backaches and muscle spasms. Amor seco has also recently been documented in animal studies to have pain-relieving actions as well as anticonvulsant actions.

Natural health practitioners and herbalists in South America today use this herbal remedy mainly for asthma and allergies and for muscle spasms and back pain. With some newer published research linking arthritis and rheumatism to various allergic reactions (and some of the same allergy-induced chemical processes found in asthma), the indigenous use of amor seco for back pain and arthritis may become the subject of future research. Amor seco is easy to administer and is highly effective at low dosages. In addition, its lack of side effects or toxicity places it in the first line of defense in the herbalist’s medicine chest of natural remedies.

Traditional Preparation: Generally, 1-3 cups of amor seco leaf tea (standard infusion) daily, 4-6 ml of a standard tincture, or 4-5 g of powdered leaves in capsules daily are used for most conditions.

The above text has been reprinted from The Healing Power of Rainforest Herbs by Leslie Taylor, copyrighted © 2005

† The statements contained herein have not been evaluated by the Food and Drug Administration. The information contained in this plant database file is intended for education, entertainment and information purposes only. This information is not intended to be used to diagnose, prescribe or replace proper medical care. The plant described herein is not intended to treat, cure, diagnose, mitigate or prevent any disease. Please refer to our conditions of sale for using this plant database file and web site.

10. “Desmodium adscendens (Sw.) DC. Fabaceae. “Amor seco”, “Beggar-lice”, “Margarita”. The plant infusion is given to people who suffer from nervousness. It is also is used in baths to treat vaginal infections. Because they believe this plant has magic powers, it is given to the lover who has lost interest in his mate, to make him/her come back. It is also used as a contraceptive (RVM). Rio Pastaza natives wash the breast of dry mothers with the leaf tea (SAR).”

Research Results: In Ghana and Sierra Leone, the plant is used in traditional medicine to treat asthma (Macfoy and Sama 1983). When the use of this plant against asthma was studied in Ghana, 1-2 teaspoons of dry powder given in 3 divided doses daily prevented asthma in an adult (Ampofo 1977). In guinea pigs, antispasmodic activity was observed from a hot water extract of an unspecified part of this plant (Addy and Dzandu 1986).”

“DESMODIUM ADSCENDENS DC. Beggarlice (E); Pega-pega (P). A leaf decoction is drunk for consumption. Pounded leaves are applied with lime juice to wounds. A leaf infusion is used for convulsions and venereal sores.”

Ingredients: Pure 100% amor seco (Desmodium adscendens) whole herb (root, leaf, stem). No binders, fillers or additives are used. It is a wild harvested product—grown naturally in the Brazilian Amazon without any pesticides or fertilizers.

Suggested Use: This plant is best prepared as an infusion (tea): Use one teaspoon of powder for each cup of water. Pour boiling water over herb in cup and allow to steep 10 minutes. Strain tea (or allow settled powder to remain in the bottom of cup) and drink warm. It is traditionally taken in 1 cup dosages, 2-3 times daily. For more complete instructions on preparing herbs, see the Methods for Preparing Herbal Remedies Page.

Share and Enjoy:
Tagged with: a kidney cleanser • and hemorrhages • to detoxify the body from environmental toxins and chemicals • to treat ovarian and uterine problems such as inflammation and irritation • used as a blood cleanser • vaginal discharges