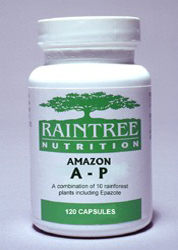 A synergistic formula of 10 rainforest botanicals traditionally used in South America for parasites.

For more information on the individual ingredients in Amazon A-P, follow the links provided below to the plant database files in the Tropical Plant Database.

Each rainforest botanical in this professional formula has been sustainably harvested in the Amazon Rainforest and documented with antiparasitic properties. To learn more about our rainforest ingredients and wild harvesting methods please visit the plant database.

This product contains no binders, fillers, or exipients and is 100% finely milled natural plants. This product is backed by Raintree’s unconditional guarantee

This formula is 100% pure natural ground plants. No binders, fillers or other additives are used. These plants have grown naturally in the richness of the Amazon without any pesticides or fertilizers and they are non-irradiated and non-fumigated.

Suggested Use: Take 2-3 capsules twice daily with meals (depending on body weight).

Several plants in this formula have been documented with hypotensive properties in animal studies.

Individuals with low blood pressure should be monitored more closely for this possible effect.

This formula is more effective if taken consecutively for a minimum of 40 days.

Do not exceed 9 capsules daily. Exceeding recommended amount may cause stomach cramps.

A powerful formula of rainforest botanicals which are used by the shamans and herbal healers in South America.

For example one form of parasite infestation can cause Elephantitis, or Elephantiasis.

True elephantiasis is the result of a parasitic infection caused by three specific kinds of round worms. The long, threadlike worms block the body’s lymphatic system–a network of channels, lymph nodes, and organs that helps maintain proper fluid levels in the body by draining lymph from tissues into the bloodstream.

This blockage causes fluids to collect in the tissues, which can lead to great swelling, called “lymphedema.” Limbs can swell so enormously that they resemble an elephant’s foreleg in size, texture, and color. This is the severely disfiguring and disabling condition of elephantiasis.

There are a few different causes of elephantiasis, but the agents responsible for most of the elephantiasis in the world are filarial worms: white, slender round worms found in most tropical and subtropical places.

They are transmitted by particular kinds (species) of mosquitoes, that is, bloodsucking insects. Infection with these worms is called “lymphatic filariasis” and over a long period of time can cause elephantiasis. Click here for more details of Elephantiasis

Anti-Parasite Support combines these wonderful rainforest remedies for parasites for a truly dynamic and effective formula.

For more in-depth information on these unique and highly effective rainforest plants, click on the ingredient names below to go to the database entry file for each rainforest plant.

Here is a list of the herbal extracts used in this product. However in our quest for improvement and excellence, our products are being continually reviewed and modified as more data on the various plants becomes available.

As a result, the ingredients may be subject to change. Any changes will be reflected in the above list as soon as we have time to make the necessary updates. Thank You.

This formulated product has not been the subject of any clinical research. A partial listing of third-party published research on each herbal ingredient in the formula is shown below. Please refer to the plant database files by clicking on the plant names below to see all available documentation and research on each plant ingredient.

Laboratory studies on amargo and its chemicals reports the bark possesses antiparasitic, anti-amebic, and antimalarial actions.*

The main active group of chemicals in simarouba are called quassinoids which are well known to scientists. The antiprotozoal and antimalarial properties of these chemicals have been documented for many years.* Several of the quassinoids found in simarouba, such as ailanthinone, glaucarubinone, and holacanthone, are considered the plant’s main constituents and are the ones documented to be antiprotozal, anti-amebic, and antimalarial.*

Boldo (Peumus boldus) Boldo leaves contains a phytochemical called asaridole (which is also found in epazote). This plant chemical has been documented to possess antiparasitic, antimalarial, and vermifuge (worm-expelling) properties.*

Fedegoso has also been used for many types of parasitic infections for many years in the tropical countries where it grows.* In vitro research on fedegoso over the years has reported antiparasitic, insecticidal, and antimalarial properties.*

Several novel plant chemicals called clerodane diterpenoids have been identified in carqueja and, in 1994, scientists showed that these chemicals had maximum effects against worms.* This could possibly explain carqueja’s long history of use as an agent to expel intestinal worms.*

In European herbal medicine quinine bark is considered antiprotozoal, antispasmodic, antimalarial, a bitter tonic, and a fever-reducer.* Quinine bark has long been documented with antiparasitic and antimalarial actions in laboratory studies.*

Laboratory studies document that erva tostão has anti-amebic actions in animal studies and in vitro studies.*

Sohni, Y., et al. “The antiamoebic effect of a crude drug formulation of herbal extracts against Entamoeba histolytica in vitro and in vivo.” J. Ethnopharmacol. 1995; 45 1: 43–52.

In a 1996 study, epazote was given to 72 children and adults with intestinal parasitic infections.* On average, the study reported an antiparasitic efficacy in 56% of cases. With respect to the tested parasites, epazote was reported to be 100% effective against the common intestinal parasites, Ancilostoma and Trichuris, and, 50% effective against Ascaris (round worm).* In a more recent study in 2001, thirty children with intestinal roundworms were treated with epazote. Disappearance of the ascaris eggs occurred in 86.7%, while the parasitic burden decreased in 59.5%.* In addition, this study also reported that epazote was 100% effective in eliminating the common human tapeworm (Hymenolepsis nana).*

Anamu’s antimicrobial activity was demonstrated by researchers from Guatemala and Austria who, in separate studies in 1998, confirmed its activity in vitro and in vivo studies against several strains of protozoa, bacteria, and fungi.*

Caceres, A., et al. “Plants used in Guatemala for the treatment of protozoal infections. I. Screening of activity to bacteria, fungi and American trypanosomes of 13 native plants.” J. Ethnopharmacol. 1998 Oct; 62(3): 195–202.

Berger I., et al. “Plants used in Guatemala for the treatment of protozoal infections: II. Activity of extracts and fractions of five Guatemalan plants against Trypanosoma cruzi.” J. Ethnopharmacol. 1998 Sep; 62(2): 107-15.

Graviola contains chemicals called Annonaceous acetogenins which have been documented and patented as antiparasitic and insecticidal agents.*

Thank you for your support and for choosing a Raintree product!