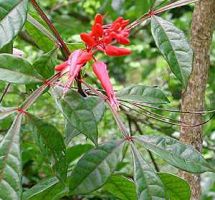 Amargo is a small tropical tree, growing only 2-6 m in height. It is indigenous to Brazil, Peru, Venezuela, Suriname, Colombia, Argentina, and Guyana. It has beautiful red flowers and fruits that turn red as they mature. Known botanically as Quassia amara, it is marketed and used interchangeably with another tree species, Picrasma excelsa. Sharing the common name of quassia (and many of Quassia amara’s constituents and uses), P. excelsa is much taller (up to 25 m in height) and occurs farther north in the tropics of Jamaica, the Caribbean, the Lesser Antilles, and northern Venezuela. In herbal medicine in the United States and Europe, very little distinction is made between the two species of trees; they are used identically and just called quassia. The name amargo means “bitter” in Spanish and describes its very bitter taste.

In the Amazon rainforest, amargo is used much in the same manner as quinine bark: for malaria and fevers and as a bitter digestive aid. It grows at lower elevations (where quinine does not) and contains many of the same antimalarial phytochemicals (plant chemicals) as quinine. In addition, it is used as an insecticide and tonic, and for hepatitis. Brazilian Indians use the leaves in a bath for measles as well as in a mouthwash used after tooth extractions. Indians in Suriname use the bark for fever and parasites. Throughout South America, amargo is a tribal remedy for debility, digestion problems, fever, liver problems, parasites, malaria, snakebite, and back spasms.

In current Brazilian herbal medicine systems, amargo is considered a tonic, digestion stimulant, blood cleanser, insecticide, and mild laxative. It is recommended for diarrhea, intestinal worms, dysentery, dyspepsia, excessive mucus, expelling worms, intestinal gas, stomachache, anemia, and liver and gastrointestinal disorders. In Peru, amargo is employed as a bitter digestive aid to stimulate gastric and other digestive secretions as well as for fevers, tuberculosis, kidney stones and gallstones. In Mexico, the wood is used for liver and gallbladder diseases and for intestinal parasites. In Nicaragua, amargo is used to expel worms and intestinal parasites as well as for malaria and anemia. Throughout South America, the bitter principles of amargo are used to stimulate the appetite and secretion of digestive juices, as well as to expel worms and intestinal parasites.

In herbal medicine in the United States and Europe, amargo is employed as a bitter tonic for stomach, gallbladder, and other digestive problems (by increasing the flow of bile, digestive juices, and saliva); as a laxative, amebicide, and insecticide; and to expel intestinal worms. In Europe, it is often found as a component in various herbal drugs that promote gallbladder, liver, and other digestive functions. In Britain, a water extract of the wood is used topically against scabies, fleas, lice, and other skin parasites. U.S. herbalist David Hoffman recommends it as an excellent remedy for dyspeptic conditions, to stimulate production of saliva and digestive juices, and to increase the appetite (as well as for lice infestations and threadworms). He also notes, “It may safely be used in all cases of lack of appetite such as anorexia nervosa and digestive sluggishness.”

Amargo bark contains many active constituents including bitter principles reported to be 50 times more bitter than quinine. While amargo contains many of the same types of antimalarial chemicals as quinine bark, it also contains another chemical called quassin. The large amount of quassin in the bark and wood gives amargo a bitterness rating of 40,000. The bark also contains the phytochemicals quassimarin and simalikalactone D. Quassimarin has demonstrated antileukemic and antitumorous properties in various studies, and simalikalactone D has been documented to have antimalarial, antiviral, antitumor, and anticancer activities. Other quassinoids have demonstrated anti-amebic actions in vivo and in vitro.

Several early clinical studies performed on amargo verified its traditional use as a natural insecticide, documenting it as an effective treatment for head lice infestation in humans. One of these studies reported a 99% effectiveness in 454 patients who had only two topical treatments one week apart. In a 1991 double-blind placebo trial on 148 children with head lice, those treated with an amargo bark extract reported fewer new cases, demonstrating a preventative activity against lice. In addition, an amargo water extract has been reported to work quite well against aphids in the garden, and researchers in India have discovered larvicidal activity against several types of insects, including mosquitoes. Since amargo has long been used for malaria in South America, researchers studied this biological effect as well. One study showed strong in vivo antimalarial activity in mice.

Amargo was reported to have antiviral activity when scientists at Texas Christian University demonstrated in 1996 that a water extract was active in vitro against cells infected with HIV. A 1978 in vivo study reported that amargo wood and/or sap extracts (as well as the isolated chemical quassimarin) inhibited the growth of leukemia in mice. Most recently, in 2002, an extract of the amargo wood was shown to have antiulcerous actions in mice, inhibiting the formation of gastric ulcers (induced by stress and various chemical means). Prior to this study, a U.S. patent was awarded on the quassinoid phytochemicals in amargo, finding them to have “remarkable antiulcer effects with low toxicities.” In another in vivo study, amargo was reported to have pain-relieving, muscle-relaxant, and sedative effects in rats and mice.

Amargo is still heavily relied upon as a natural remedy in South America for parasites of all kinds. It is slowly catching on here in North American herbal medicine practices for parasites and head lice, but it is predominately used here as a bitter digestive aid and remedy for digestive disorders. Amargo wood is on the FDA’s GRAS list (generally regarded as safe). The wood and its main bitter chemical, quassin, also are approved as food additives – and are employed in beverages and baked goods for their bitter taste. Toxicity studies performed on rats and mice reported no toxicity in oral dosages up to 5 g per kg of body weight.

Cautions: It interferes with fertility. Large amounts might cause nausea and stomach irritation.

Traditional Preparation: The traditional remedy as a digestive aid is 1/2 teaspoon of wood powder infused in one cup of boiling water. This is taken 10-15 minutes before or with meals. Alternatively, 1g in tablets or capsules can be taken two or three times daily on an empty stomach for an internal parasite cleanse. Another remedy calls for 2 teaspoons of wood powder or chips to be soaked in 1 cup of cold water overnight (a cold maceration). This is drunk for internal parasites, gallstones, and digestive disorders. This maceration can also be used topically for skin/hair parasites or as a bug spray, especially for aphids on plants and fleas on the dog. For head lice or fleas, prepare a cold maceration (allowing it to macerate/soak for 24 hours). Strain and pour through the hair or apply directly to the skin. It can be washed off in an hour (or simply left on the dog). For lice, repeat every three days for three applications, and for fleas, apply once monthly. Also, a small handful of amargo wood chips can be placed in backyard ponds/fountains (or a few chips in bird baths) to kill mosquito larvae without harming fish or birds.

Amargo should not be used during pregnancy.

Amargo has been documented to have an antifertility effect in studies with male rats. Men undergoing fertility treatment or those wishing to have children probably should avoid using amargo.

Large amounts of amargo can irritate the mucous membrane of the stomach and can lead to nausea and vomiting. Do not exceed recommended dosages.

Drug Interactions: None reported. However, amargo may interfere with male fertility drugs.

The above text has been reprinted from The Healing Power of Rainforest Hearbs by Leslie Taylor. Published and copyrighted by Square One Publishers Inc., © 2005

A complete technical data report is available for this plant.

† The statements contained herein have not been evaluated by the Food and Drug Administration. The information contained in this plant database file is intended for education, entertainment and information purposes only. This information is not intended to be used to diagnose, prescribe or replace proper medical care. The plant described herein is not intended to treat, cure, diagnose, mitigate or prevent any disease. Please refer to our conditions of use or using this plant database file and web site.

24. “EFFECTS: The amaroid drug (quassinoids) stimulates secretion of gastric juices, increases appetite and aids digestion. It may also have a choleretic effect.

Homeopathic Uses: Quassia amara is used for gallbladder complaints, as bitter tonic, purgative and as anthelmintic (for ascarid and threadworms).

Tada, A., et al. “Examination of original plant of Jamaica quassia extract, a natural bittering agent, based on composition of the constituents.” Shokuhin Eiseigaku Zasshi. 2009 Feb; 50(1): 16-21.

Ingredients: 100% pure amargo bark (Quassia amara). No binders, fillers or additives are used. This is a wild harvested plant—grown naturally in the Brazilian Amazon without any pesticides or fertilizers.

Traditional Preparation:* The traditional remedy as a digestive aid is 1/2 teaspoon of wood powder infused in one cup of boiling water. This is taken 10-15 minutes before or with meals. Alternatively, 1g in tablets or capsules can be taken two or three times daily on an empty stomach for an internal parasite cleanse. Another remedy calls for 2 teaspoons of wood powder or chips to be soaked in 1 cup of cold water overnight (a cold maceration). This is drunk for internal parasites, gallstones, and digestive disorders, and used externally for lice. For more complete instructions on preparing herbs see the Methods for Preparing Herbal Remedies Page.

Amargo should not be used during pregnancy.

Amargo has been documented to have an antifertility effect in studies with male rats. Men undergoing fertility treatment or those wishing to have children probably should avoid using amargo.

Large amounts of amargo can irritate the mucous membrane of the stomach and can lead to nausea and vomiting. Do not exceed recommended dosages.