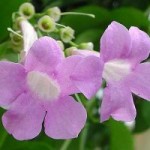 Ajos sacha is an evergreen tropical shrubby vine that is native to the Amazon rainforest. It can either be described as a shrub or a vine since it produces numerous woody vines from the root that grow only 2-3 m tall and form a shrub-like appearance. It is cataloged under two main Latin names, Mansoa alliacea and Pseudocalymma alliaceum, although several other synonyms are used as well. Its Spanish name, ajos sacha, means “false garlic” and refers to the strong garlic smell and flavor of the leaves when crushed. In the tropics and in the Amazon rainforest, the leaves are even used as a condiment or spice for its garlic flavor and odor.

Ajos sacha produces bright green leaves up to 15 cm long and beautiful deep lavender flowers with a white throat that fade to a pale lavender, then to almost white. All three flower colors can be found on the plant simultaneously. Its compact habitat and pretty continuos flowers make it a popular ornamental plant in gardens in the tropics. It has made its way to speciality tropical nurseries in the United States and can be found in some gardens in the South where freezing and frost won’t kill this tropical vine (or it is grown as a house plant). It is called “garlic vine” here in the United States.

Ajos sacha is properly classified in the Mansoa taxon which include about 15 other species (some of which also smell like garlic) and are distributed throughout tropical South America. Ajos sacha can be found growing wild in the tropical rainforests of Brazil, Ecuador, Peru, the three Guyanas, as well as Costa Rica. It is especially abundant in the forests alongside the Amazon, Ucayali and Madre de Dios rivers in the Peruvian Amazon.

Ajos sacha is well used and respected by most of the indigenous Indian tribes of the Amazon and almost all parts of the plant are used; the leaves, vine bark, and root. Most consider the plant to be “magical” or “spiritual” and capable of driving away evil spirits or used for good luck. The leaves, tied in bunches, can often be found in local huts and houses for this purpose, or, the leaves are burned as smudge over people or in houses to “cleanse the spirit” or to bring good luck. The Shipibo-Conibo Indians give a tea of bark to dogs to make them good hunters and also drink the tea themselves to bring good luck when hunting or fishing. Oftentimes, ajos sacha can be found as an adjunctive ingredient in the hallucinogenic potion the shamans use in spiritual ceremonies called ayahuasca. It is added to the brew to drive away evil spirits, or to purify the blood and body to make the ayahuasca more readily accepted.

Ajos sacha is also used as a medicine by the Indian tribes in the Amazon. The Shipibo-Conibo prepare the bark into a poultice to use on bumps, swellings and inflammatory conditions of the skin. They prepare the bark in an infusion or the leaves in a decoction for rheumatism, arthritis, colds, uterine disorders, inflammation and epilepsy. The root is prepared in a cane alcohol tincture as an overall regenerative whole body tonic. The Ese’eja Indians prepare a leaf tea for colds, while the Amuesha use a leaf tea to aid fertility. The Wayapi put the leaves in a bath to treat feverish conditions. The Creoles in Guyana use the leaves in baths for cramps and fatigue and the Tapajos in Brazil use it in baths for body aches and the flu.

Ajos sacha is also quite well known and popular in the cities and towns in the Amazon and has a long history of use in herbal medicine systems in Peru and Brazil. It is considered analgesic, anti-inflammatory, and antirheumatic and widely used for arthritis, rheumatism, body aches and pain, and muscle aches, injuries and pain. The bark is typically prepared in a tincture or a decoction for these types of conditions but the leaves are used similarly for the same conditions as well. In addition, the leaves of ajos sacha are also a common remedy for colds, flu, pneumonia, coughs, fever, and headaches. The leaves are generally prepared as an infusion or decoction. The root is also prepared in a tincture or a cold maceration (soaking it in cold water for 2-3 days) and taken as a general whole-body tonic.

Ajos sacha contains several of the main sulfur compounds that garlic does. It is these com-pounds which are responsible for the garlic-like odor and taste of ajos sacha. The wood of the vine was reported to contain two lapachone chemicals which are well known plant chemicals of the Bignoniaceae family and documented with anticancerous and antimicrobial actions. The leaves and/or flowers contain the known anti-inflammatory and antibacterial plant steroids beta sitosterol, stigmasterol, daucosterol, and fucosterol.

The sulfur compounds (the predominate ones being alliin and various allyl sulfides) in both garlic and ajos sacha have been studied by many and reported over the years to be able to lower cholesterol. When laboratory rats were fed dried ajos sacha flowers (2% of their dietary intake), scientists reported that cholesterol levels were lowered, and much like garlic, the absorption of cholesterol in the intestines was inhibited. In research published in 1980, a water extract of ajos sacha leaves was reported to have an antioxidant effect which was attributed to the anthocyanin compounds found in the plant. Researchers confirmed ajos sacha’s long standing use for arthritis and rheumatism when they reported that the plant was capable of inhibiting COX (an enzyme required in the inflammatory process) and well as reduced ear edema in a study with rats in 1997. Ajos sacha has also been reported with antimicrobial actions against fungi, plant viruses, and bacteria, which may help explain its long standing use for colds, flu, pneumonia and other upper respiratory infections.

Ajos sacha is a very common and well respected plant remedy in the Amazon for the pain and inflammation of arthritis and rheumatism, as well as, colds, flu, and fever. Some capsule products of the leaves are sold in stores in Brazil and Peru, and it can be found as an ingredient in other various multi-herb formulas for cold and flu, pain, inflammation and arthritis in general. The use of ajos sacha is just catching on here in the U.S. market; a few products are now available and it is showing up in several formulas for colds and arthritis here as well.

Traditional Preparation: Generally, if the bark is prepared into a natural remedy, a decoction or tincture method is used. The leaves are thought to have best the broad spectrum actions and generally they are prepared into decoctions, tinctures, and capsules.

† The statements contained herein have not been evaluated by the Food and Drug Administration. The information contained in this plant database file is intended for education, entertainment and information purposes only. This information is not intended to be used to diagnose, prescribe or replace proper medical care. The plant described herein is not intended to treat, cure, diagnose, mitigate or prevent any disease. Please refer to our conditions of use for using this plant database file and web site.

23. “Uses: Wild garlic bark is mixed with water and used as a bath for people with asthma or who smoke excessively (AMP). Bark raspings taken orally with water, or with sugarcane rum are used to treat asthma and arthritis, respectively (AMP). The most common form of usage seems to be parts of the plant in water which is used to bathe oneself and treat or protect against: evil spirits (AED), fever (GMJ), influenza and aches and pains (BDS), as well as nervousness, fatigue, and cramps (AED).”

USES: Infusion of leaves used against colds and fevers.

CHEM.: The pronounced garlic odor is due to the presence of a number of organic sulfides (Ref: BIGN 1).”

Ingredients: 100% pure ajos sacha leaves (Mansoa alliacea). No binders, fillers or additives are used. This is a wild harvested plant—grown naturally in the Peruvian Amazon without any pesticides or fertilizers.

Suggested Use: This plant is best prepared as an infusion (tea): Use one teaspoon of powder for each cup of water. Pour boiling water over herb in cup and allow to steep 10 minutes. Strain tea (or allow settled powder to remain in the bottom of cup) and drink warm. It is traditionally taken in 1 cup dosages, 2-3 times daily