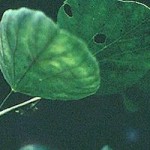 Abuta has many traditional uses especially for women, it is used for menstrual problems, Fibroids, endometriosis, as well as being a hormonal balancing tonic. Another general use is purported to be for kidney stones and urinary tract infections.

Abuta is a woody, climbing rainforest vine with leaves up to 30 cm long. It produces inedible, dark, grape-sized berries. It belongs to the genus Cissampelos, of which thirty to forty species are represented in the tropics. Abuta vine is blackish-brown and tough; when freshly cut it has a waxy luster. Abuta is found throughout the Amazon in Peru, Brazil, Ecuador, and Colombia, and it is cultivated by many to beautify their gardens.

From The Healing power of Rainforest Herbs: by Leslie Taylor

The common name of this plant has caused some confusion in herbal commerce today. In Brazil, this plant is well known as abutua, and in Peru it is known as abuta or barbasco. References to abuta in herbal commerce today may apply to either Cissampelos pariera or to a completely different plant, Abuta grandiflora. Another tropical vine, Abuta grandiflora, also has the common name of abuta in South America, but this is a very different plant with different chemicals and uses in herbal medicine. This plant is referred to in Peru as chiric sanago as well as abuta (hence the confusion).

Abuta (Cissampelos pariera) is commonly referred to as the midwives’ herb throughout South America because of its long history of use for all types of women’s ailments. The vine or root of abuta is used in tropical countries to prevent a threatened miscarriage and to stop uterine hemorrhages after childbirth. Midwives in the Amazon still carry abuta with them for menstrual cramps and pre- and postnatal pain, excessive menstrual bleeding, and uterine hemorrhaging. Abuta is also believed to aid poor digestion, drowsiness after meals, and constipation.

Virtually all parts of the plant have been used by indigenous peoples throughout the South American rainforest for thousands of years for other ailments and are still in use today. Members of the Palikur tribe in Guyana use a poultice of abuta leaves as a topical pain-reliever, and the Wayãpi Indians use a decoction of the leaf and stem as an oral analgesic. Ecuadorian Ketchwa tribes use the leaf decoction for eye infections and snakebite. The Créoles in Guyana soak the leaves, bark, and roots in rum and use it as an aphrodisiac. Indigenous tribes in Peru use the seeds of abuta for snakebite, fevers, venereal disease, and as a diuretic and expectorant. Amazonian herbal healers (called curanderos) toast the seeds of abuta and then brew them into a tea to treat internal hemorrhages and external bleeding. They also brew a leaf tea for rheumatism and a vine wood-and-bark tea to treat irregular heartbeat and excessive menstrual bleeding.

In Brazil, abuta is widely employed in herbal medicine today as a diuretic and as a tonic (a general overall balancer), as well as to reduce fever and relieve pain. It is often employed for menstrual cramps, difficult menstruation, excessive bleeding and uterine hemorrhages, fibroid tumors, pre- and postnatal pain, colic, constipation, poor digestion, and dyspepsia. In Mexico, abuta has a long history of use for muscle inflammation, snakebite, rheumatism, diarrhea, dysentery, and menstrual problems.

In North American herbal medicine, abuta is used for many of the same conditions as in South America as well as for inflammation of the testicles and minor kidney problems.

Cissampelos plants, including abuta, contain a group of plant chemicals called isoquinoline alkaloids. Since the late 1960s, these chemicals have received a great deal of attention and research. Out of thirty-eight alkaloids thus far discovered in abuta, one, called tetrandrine, is the most well documented. Clinical research over the years has found tetrandrine to have pain-relieving, anti-inflammatory, and fever-reducing properties. More than one hundred recent clinical studies also describe this chemical’s promising actions against leukemia and some other cancer cells, and research is ongoing. However, the therapeutic dosages of tetrandrine used in these animal studies are much higher than one can reasonably obtain from natural abuta root or vine. (The average-weight person would need to take about 2 lbs of abuta root each day to obtain the therapeutic dosage of tetrandrine used in the animal studies.) Other recently published studies examined tetrandrine’s possible cardioactive and blood pressure – reducing (hypotensive) effects through numerous pathways and mechanisms of action at much smaller dosages.

Another well-known alkaloid chemical, berberine, has been documented to have hypotensive, antifungal, and antimicrobial actions. This chemical has been used for the treatment of irregular heartbeat, cancer, Candida, diarrhea, and irritable bowel syndrome. Another alkaloid called cissampeline is sold as a skeletal muscle relaxant drug in Ecuador.

In 1962, researchers reported abuta demonstrated anti-inflammatory, smooth muscle relaxant, antispasmodic, and uterine relaxant actions in various laboratory animals. Subsequent studies with animals confirmed the plant’s antispasmodic and anti-inflammatory actions. These documented effects are quite similar to abuta’s traditional uses for menstrual disorders (including cramping and pain). In other animal studies, a root extract was reported to have a diuretic effect, a finding that confirms another of its traditional medicine uses.

Other in vivo research on extracts of abuta indicated that the leaf has antiulcerous actions and that the root has a very mild hypoglycemic action (only at high dosages). Studies have also shown that the abuta root has other possible therapeutic uses: it demonstrated anticonvulsant actions in mice; and, in dogs, it was shown to significantly lower blood pressure. In addition, test-tube (in vitro) studies over the years has reported that abuta has antioxidant properties; antibacterial actions against Staphylococcus, Pseudomonas, Salmonella, and Klebsiella; and antimalarial effects. One of these in vitro studies also reported that a root extract demonstrated a toxic effect against colon cancer cells.

Abuta is still used in the Amazon and outlying areas for the same purposes for which it has been used traditionally for centuries – as a childbirth aid and for general women’s ailments. South and North American natural health practitioners commonly rely on abuta as an excellent natural remedy for menstrual difficulties, including cramping and pain, premenstrual syndrome (PMS), excessive bleeding, and fibroid tumors. Its ability to curb excessive menstrual bleeding very quickly can be quite remarkable. It is often employed in overall female balancing formulas, in kidney formulas (for its diuretic and smooth-muscle relaxant effects), and, in combination with other plants, in heart tonics and hypertension remedies.

Toxicity studies with animals confirm the safety of the plant; rats given 10 g of abuta per kilogram of body weight evidenced no toxic effects.

Cautions: It relaxes the uterus and is contraindicated in pregnancy. It may also potentiate medications used to treat hypertension.

Traditional Preparation: In South America, a standard decoction is generally prepared with the vine wood and taken two or three times daily in 1-cup doses. (It tastes quite horrible, however!) The natural remedy in North American herbal medicine systems for menstrual difficulties is generally 1-2 g of the powdered vine in tablets or capsules two or three times daily, or 2-3 ml of a standard tincture twice daily, or as needed.

Abuta has been documented to lower blood pressure in two animal studies; therefore, abuta is probably contraindicated for people with low blood pressure. An alkaloid in abuta, tetrandrine, has been documented to have various actions on heart function in animals and humans. Those with a heart condition or taking heart medications should consult with their doctor before using this plant.

Abuta has demonstrated to be a uterine relaxant and traditionally employed as a childbirth aid. A pregnant woman should use it only under the supervision of a qualified healthcare practitioner.

Abuta can be found in these Raintree products:

Purchase a one pound package of Raintree’s sustainably harvested pure abuta vine bark powder – rich in active and beneficial phytochemicals that occur naturally in this plant. This plant has been milled into a fine powder which is suitable to stuff into capsules or to prepare your own teas, tinctures or extracts. Raintree’s abuta has been sustainably wild-harvested in the Amazon Rainforest (without any pesticides or fertilizers).

ngredients: 100% pure abuta vine (Cissampelos pareira). No binders, fillers or additives are used. This is a wild harvested plant—grown naturally in the Brazilian Amazon without any pesticides or fertilizers.

Suggested Use: This plant is best prepared as a decoction. Use one teaspoon of abuta powder for each cup of water. Bring to a boil and gently boil in a covered pot for 20 minutes. Allow to cool and settle for 10 minutes and strain warm liquid into a cup (leaving the settled powder in the bottom of the pan). It is traditionally taken in 1 cup dosages, 2-3 times daily.

Abuta has been documented to lower blood pressure in two animal studies; therefore, abuta is probably contraindicated for people with low blood pressure. An alkaloid in abuta, tetrandrine, has been documented to have various actions on heart function in animals and humans. Those with a heart condition or taking heart medications should consult with their doctor before using this plant.

Abuta has demonstrated to be a uterine relaxant and traditionally employed as a childbirth aid. A pregnant woman should use it only under the supervision of a qualified healthcare practitioner.